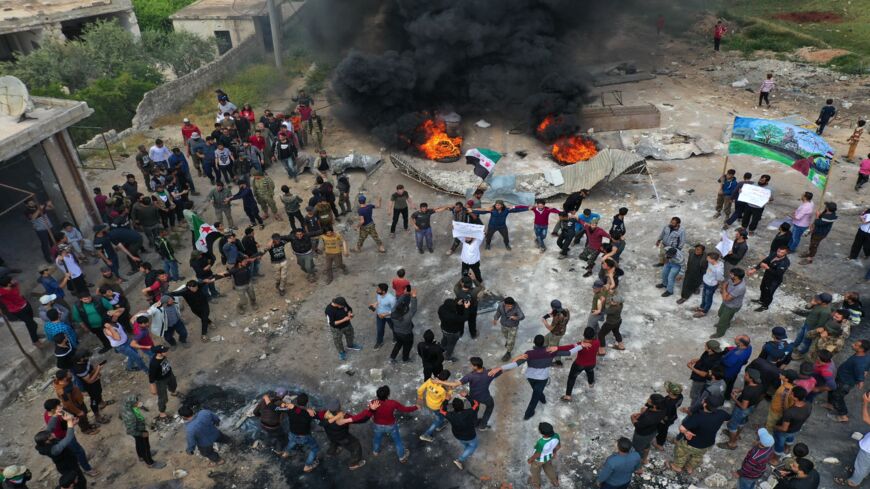 A drone image shows Syrian demonstrators gathering during a protest in the village of Maaret al-Naasan in Syria's Idlib province on May 1, 2020, to protests against a reported attack by Hayat Tahrir al-Sham. - OMAR HAJ KADOUR/AFP via Getty Images

Hayat Tahrir al-Sham (HTS), which controls Syria’s northwestern province of Idlib, has stepped up its security measures as protests escalate.

HTS is particularly targeting its Salafist opponents, who have exploited a number of security incidents carried out by HTS to fan the flames of popular anger against it.

Tension still prevails in the displacement camps in the town of Atmeh, north of Idlib, after HTS members shot Fatima al-Hamid in the head as she was reportedly trying to smuggle small quantities of fuel from Afrin to Idlib.

In response to the public outrage over the murder, HTS issued a statement confirming its keenness to apply Sharia law in the case, saying that it had already made arrests.

Meanwhile, HTS continues its arrest campaign targeting the Salafists who fueled and supported the anti-HTS protests. It is also leading a crackdown against protesters — including against a prominent media activist and leader in Hizb ut-Tahrir (the Syria branch), a jihadi party opposing it. HTS arrested this month two members of Hizb ut-Tahrir from the Killi village, northwest of Idlib.

This coincided with HTS mobilizing its forces and intensifying temporary checkpoints in the area mostly populated by displaced persons.

In this context, a source close to HTS told Al-Monitor on condition of anonymity, “Mistakes are likely to happen on the field. [Hamid’s killing] was an individual incident and it must be promptly remedied. This must not happen again. The members who shot the woman were arrested. However, some are exploiting these events to settle scores. They are toying with people’s pain and misfortunes.”

The source continued, “We have always reiterated our abidance by the rule of Sharia. But some are alleging otherwise. Hizb ut-Tahrir is trying to fuel the crisis, and it is not unlikely that its members were the ones who opened fire during the Atmeh protests to frame HTS and accuse it of dispersing protests with live bullets.”

Orabi Abdul Hai Orabi, a researcher in the Unit of Religious Movements at the Jusoor Center for Studies, told Al-Monitor, “Hizb ut-Tahrir’s escalating activity in Idlib is worrying HTS, as it (Hizb ut-Tahrir) has considerable popular influence. Hizb ut-Tahrir has recently lured several key Salafist figures who once were loyal to HTS or at least impartial into taking an opposite stance against it. But HTS is facing Hizb ut-Tahrir without fear of consequences, as the latter is not a military movement.”

He added, “Hizb ut-Tahrir is trying to maintain the momentum of the protests and is aiming to widen its own loyal popular base in all areas of Idlib. It is currently focusing its activity in the Atmeh camps, which consist of a security gap that HTS has so far failed to control. The area contains hundreds of thousands of displaced people, distributed in very large camps. It is the safe haven and center of activity of Hizb ut-Tahrir.”

As part of its attempts to gain more popularity, Hizb ut-Tahrir is trying put HTS’ violations under the spotlight. One of the party’s members, Mustafa al-Qasir, told Al-Monitor, “HTS is carrying out assassinations and arrests; imposing security, economic and living restrictions; and storming people’s homes and camps. The killing of Fatima al-Hamid will not be the last crime if people keep mute about injustice. We are noticing the people’s anger and revolt against those who are making them suffer.”

“At the same time, we are seeing serious efforts (among the local population) to take back power from its usurpers. This will revive the revolution and put it back on the right track,” Qasir added.

It seems that the security and economic policies pursued by HTS could undermine its power. Ruling with an iron fist, applying a gagging policy and imposing exorbitant taxes on basic commodities such as fuel, electricity and food supplies will only generate more popular frustration.

This is clearly evident in the price differences between the northern countryside of Aleppo and the Idlib region, which stirred the ire of residents, most notably the camp residents.

Hizb ut-Tahrir and other opposing Salafi groups are leveraging this situation to mobilize popular bases against HTS.

Ahmed Mazhar Saado, an independent journalist from Idlib, argued that HTS is trying to seize and control the entire region of Idlib without allowing any other organization to curb its influence.

He told Al-Monitor, “HTS wants to have the final say in negotiations with international parties. So far, HTS has been able to maintain control in its own areas.”

For his part, Fadel Abdul-Ghani, director of the Syrian Network for Human Rights, told Al-Monitor, “HTS commits violations against civilians, making them vulnerable to exploitation by other Salafi parties. HTS is also manipulating civilians in its areas through humanitarian aid in order to legitimize its existence and ward off accusations of terrorism.”

He added, “We cannot trust HTS’ promise that it will hold the perpetrators of violations accountable, as it has no judicial system. The recent killing of the woman from the Atmeh camp shows how easy it is for HTS members to kill civilians amid the absence of an accountability system.”