Hamas is seeking to improve its international relations by reinforcing some ties and mending others following a period of relative isolation. 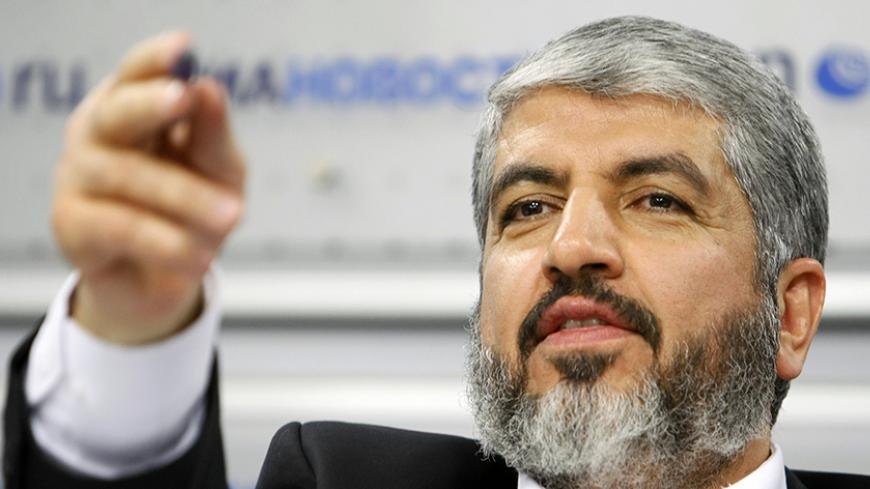 It seems Hamas’ political leadership has been significantly preoccupied and politically active since July, working to rebuild its relationships in the region to overcome its isolation.

Khaled Meshaal, head of Hamas’ political bureau, received Russian Foreign Minister Sergey Lavrov on Aug. 3 in Doha, Qatar, and discussed developments regarding the Palestinian cause, as well as the general situation in the region. Hamas issued an official statement the same day, noting that Meshaal and Lavrov tackled Gaza’s circumstances since the Israeli war in 2014, in addition to Israeli assaults on Islamic and Christian holy sites in Jerusalem. Lavrov extended an official invitation to Meshaal to visit Moscow.

Hamas spokesman Ismail Radwan told Al-Monitor, “The Meshaal-Lavrov meeting shows Russia’s interest in the Palestinian cause and comes as a continuation of the periodic meetings held by Hamas with regional and international parties. However, there were no discussions in the meeting regarding the possibility of Russia playing the role of a mediator to reactivate the reconciliation between Fatah and Hamas, although Lavrov and Meshaal have stressed its importance in general.”

Hamas feels it has achieved a significant diplomatic advancement by meeting with Lavrov and receiving an official invitation to Moscow, which it sees as a practical response to the Western policy of ignoring Hamas since the movement won the legislative elections in 2006. This is what a number of political analysts close to Hamas, including Jawad al-Hamad, spoke of on Aug. 16.

Meanwhile, Hamas is also awaiting new Russian action in the region on the Syrian, Yemeni and Iranian situations. By strengthening its relations with Hamas, Moscow might seek to remedy its years of dissociation from the Palestinian cause, during which Russia lost its influence. By rekindling communication with Hamas, Russia most likely seeks greater influence in the Arab-Israeli conflict.

The invitation to Moscow could be a turning point for Hamas that won’t stop at the Kremlin, Hamas said in an Aug. 9 analysis on its official website. The step could open a path toward Latin America and Central Asia, as Hamas seeks to gather support for the Palestinian cause and form alliances to pressure Europe and the United States to change their designation of Hamas as a terrorist organization.

Al-Monitor learned from influential Hamas sources who requested anonymity that a prominent Russian envoy had visited Gaza early July and met with members of Hamas’ political bureau, within an atmosphere of secrecy. The sources refused to reveal the identity of the envoy.

Hamas is well-aware that Russia is part of the Quartet on the Middle East, which also includes the United Nations, United States and European Union. Hamas knows any potential reconciliation between the movement and Moscow is dependent on Hamas’ commitment to the Quartet’s requirements — which include recognizing the state of Israel and renouncing violence. However, Hamas might find it difficult to endorse and abide by such requirements, which it made clear in an official statement June 21.

Hamas describes the Quartet’s requirements as unfair and has been rejecting them since they were announced in 2006. Osama Hamda, Hamas’ foreign relations chief, wrote in an essay published Aug. 6 that Hamas is not willing to accept the same requirements it has already rejected.

Lately, Turkey has not been too far from Hamas’ diplomatic efforts. Both parties have shared close ties since 2006, and Hamas leaders have made many visits to Ankara. Perhaps Hamas now considers that Turkey and Qatar have become stronger allies, since Hamas’ relations with Iran and Syria were damaged following the outbreak of the Syrian revolution. This is why a Hamas leadership delegation headed by Meshaal paid an official visit Aug. 12 to Turkey, where it met with Turkish President Recep Tayyip Erdogan and Prime Minister Ahmet Davutoglu.

Yousef Rizqa, former information minister in the Hamas government, refused to reveal to Al-Monitor what happened during Hamas’ discussions in Ankara. However, “Erdogan rejects the stances taken by the countries that listed Hamas as a terrorist organization and conveyed [Turkey’s] political position to world countries,” Rizqa said. “He asked Western countries to communicate with [Hamas] and hold dialogues to achieve stability in the region. The most important part of Meshaal’s visit to Ankara was its timing, in light of the developments in Syria, Iraq, Yemen and Palestine.”

Meanwhile, Yasin Aktay, advisor to Turkey’s prime minister, revealed in an Aug. 17 interview with Al-Resalah newspaper in Gaza that Meshaal’s discussions in Ankara focused on efforts to reach a truce between Hamas and Israel, in anticipation of lifting the siege of Gaza and guaranteeing that the needs of Gaza’s citizens are met.

Perhaps Hamas realizes there is a Turkish-Israeli desire to improve bilateral relations between the two, and the movement might try to secure a Turkish commitment that would make lifting the Gaza blockade a condition for the restoration of Ankara's relations with Tel Aviv. Hamas seems reassured that its Turkish allies will make its wishes happen. Former Israeli diplomat Alon Liel predicted as much in an analysis published June 25.

In an Aug. 16 interview with the BBC, Meshaal said Hamas has explored relations with Saudi Arabia to perhaps address challenges such as lifting the siege on Gaza and to alleviate the Palestinians’ suffering in Jerusalem.

Mousa Abu Marzouk, a member of Hamas’ political bureau, noted in his Aug. 4 interview on the Hamas website that the movement’s last visit to Saudi Arabia, on July 18, has achieved the goals it had set. Marzouk considered the visit successful.

Al-Monitor learned from a senior Hamas official who requested anonymity that Hamas is arranging “a second visit to Saudi Arabia, but its date has not been set yet.”

“The purpose of the visit would be to resume [tackling] the subjects it discussed during its first visit. An agenda for the visit is being prepared based on achieving reconciliation between Fatah and Hamas and [finding a solution for] the hard conditions of Gaza’s residents.”

There is consensus within Hamas on improving its relations with Saudi Arabia, since the latter is leading Arab diplomacy at this stage. However, one large potential obstacle to any Hamas-Saudi Arabia understanding is the Iranian wrath that reached its peak when Tehran canceled Hamas’ planned visit in August, as a result of Meshaal’s earlier meeting with King Salman bin Abdul-Aziz Al Saud.

The reason behind Iran’s anger became clear during a meeting between an official in the Iranian Revolutionary Guard Corps and Hamas officials in an Arab capital that remained undisclosed. In late July, the Iranian official protested Hamas’ visit to Saudi Arabia, which Iran said Riyadh wanted to use against Tehran. It is noteworthy that Meshaal had not visited Iran for four years. However, he did visit Saudi Arabia as soon as he got approval, especially following the nuclear deal Iran signed July 14, which Saudi Arabia opposed, according to the Iranian official.

“Hamas’ relationship with Iran still stands, and it never ceased to exist, and I hope that Tehran will continue to support the Palestinian resistance against the Israeli occupation,” Khalil al-Hayya, a member of Hamas’ political bureau, told Al-Monitor.

Al-Monitor learned from influential Hamas sources who asked that their identities be withheld that Hamas is scheduling more visits abroad and more diplomatic meetings, a few of which will be revealed to the media, while others might remain secret.

Hamas hopes the political and diplomatic action it has been making in recent weeks will help it overcome the current tension in its regional relations. These relationships experienced setbacks in light of the changing stances regarding the political developments and lack of stability in the region. This raises many questions about the success or failure that Hamas may bring.

Although the road of Hamas’ political relations is not covered in petals, and although many parties — mainly Israel and the Palestinian Authority — won’t be happy if Hamas breaks through the wall of isolation that has been imposed on it, the movement believes it has come a long way in overcoming the obstacles. This will contribute to rebuilding its regional and international ties.