Although tensions between the Egyptian authorities and Hamas were expected to escalate amid reports that Egypt had banned Hamas head Ismail Haniyeh from returning to Egypt and subsequently to Gaza, Egyptian analysts expect relations to be more relaxed in Haniyeh's absence. 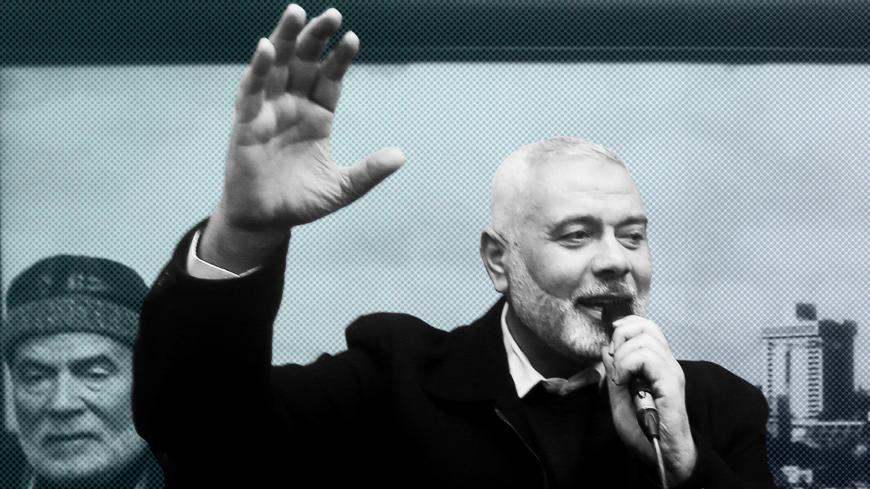 CAIRO — News about Egypt banning Ismail Haniyeh, the head of Hamas’ political bureau, from returning to Cairo following his foreign tour was expected to stir a crisis between the Egyptian authorities and Hamas. However, a security delegation from the Egyptian General Intelligence Service completed its visit Feb. 12 to the Gaza Strip peacefully after meeting with Hamas leaders.

Qassem noted that the meetings focused on “strengthening relations between the two sides, the Egyptian role to ease the Israeli siege on Gaza and the reconciliation between Palestinian factions," particularly Hamas in the Gaza Strip and Fatah in the West Bank.

As for Haniyeh, Hamas sources confirmed in a Feb. 2 press statement that he would continue to run the movement's political bureau, but would do so from Doha, so he can freely conduct his foreign trips, which are expected to continue until the end of 2020 or the beginning of 2021.

The announcement of Haniyeh settling in Qatar followed reports in the past month that the Egyptian authorities prevented his return from the foreign tour — which so far has included Qatar, Turkey, Iran and Malaysia — to Egypt, which is the only passage to Gaza via the Rafah border crossing.

However, a Palestinian journalist close to Hamas leaders told Al-Monitor they were fully aware that Egypt had asked Haniyeh not to travel to Tehran to participate in the funeral of Islamic Revolutionary Guard Corps commander Qasem Soleimani. But Haniyeh deliberately violated this condition, making it difficult for Cairo to allow his return at present, he added.

The journalist, who asked for anonymity, said there are two possibilities concerning Haniyeh's issue with the Egyptian authorities. “The first possibility is that Haniyeh traveled to Iran expecting that Egypt would later overlook this breach of its condition to avoid tense relations," he said.

He added, “The second is that Haniyeh traveled to Iran while ignoring the Egyptian condition because he had made a decision, from the beginning, not to return to Egypt or Gaza, in light of Egypt’s restriction of his movement since 2017."

A source from the Egyptian Ministry of Foreign Affairs, who preferred anonymity, said Egypt was not seeking to restrict Haniyeh's movements. “Gaza lacks an Egyptian Consulate from which Gazans can get the required visas,” he told Al-Monitor.

“So even if Haniyeh had not visited Tehran, Gazans in general are not allowed to enter Egypt through any land, sea or air outlet except the Rafah land crossing — with the exception of those who hold another nationality or have residences in Egypt."

The Rafah crossing is managed by Egyptian Intelligence.

With the absence of the Palestinian Authority (PA) from Gaza, which has been under Hamas’ rule since 2007, the Agreement on Movement and Access, signed between the PA and Israel in 2005 to regulate the crossing's operation, was halted. Subsequently, the crossing should have been completely closed except for some exceptional cases approved by Egyptian Intelligence.

Since Haniyeh assumed the Hamas political bureau presidency in May 2017, replacing Khaled Meshaal, Egyptian border guards at the Rafah crossing have prevented Haniyeh from carrying out any visits outside Gaza, including to Egypt, except on three occasions.

The first and second were in September 2017 and February 2018 when he went to Cairo, but was prevented from embarking on his planned visits to Qatar and Turkey because he failed to carry an "exceptional" visa to allow him to reenter Egypt on his return. The third instance came in December 2019 when he was allowed to travel to Cairo, and later to Turkey, Qatar and Malaysia.

Despite many news reports that Haniyeh had agreed in advance not to visit Iran, and that Egypt was furious that he did so anyway, Haniyeh’s media adviser Taher al-Nono told Al-Monitor that was not the case. Haniyeh's planned visits, including to Iran, "were discussed before he left Egypt or even Gaza,” as was his decision to move to Qatar, Nono said.

Nono denied any tensions between Egypt and Hamas that might have pushed Haniyeh to settle in Doha.

So, why did Egypt allow Haniyeh to leave on a foreign tour for the first time since 2017?

Mohamed Bahaa el-Din, a retired political science professor, told Al-Monitor that Egypt might have allowed Haniyeh to leave after learning from him or other Hamas leaders that he intends to settle in Doha.

Bahaa el-Din noted that Haniyeh has strong ties with Qatar, Turkey and Iran, all of which Egypt accuses of supporting and financing terrorism in the Sinai Peninsula. Therefore, “Haniyeh’s presence in Gaza on the Sinai border could have been unwelcomed and Egyptian authorities preferred to expedite his absence [from Gaza], considering he might have supported those countries’ agenda. This was not the case with Sinwar and Hayya, who have rarely visited Qatar, Turkey or Iran,” he said.

Haniyeh is not the first head of Hamas’ political bureau to settle in Qatar. In January 2012, Meshaal announced that he also settled in Qatar, without disclosing why.

The absence of both Haniyeh and Meshaal from the Gaza Strip may create greater opportunities for Egypt to implement its policy for solving the Palestinian crisis, especially since the crisis is likely to become further complicated since US President Donald Trump announced Jan. 28 the details of his proposal for peace between Israelis and Palestinians.

The plan, which the United States calls the "deal of the century," was unanimously rejected by Palestinian factions.

Amr Helmy, a political science researcher at Cairo University, told Al-Monitor that Egypt may intend to counter the US plan diplomatically by reactivating the 1993 Oslo Accord, which is binding for both Israel and the PA.

The Oslo Accord gives a unified Palestinian authority the right to negotiate with Israel for an independent Palestinian state based on the 1967 borders, with East Jerusalem as its capital, in accordance with UN Security Council Resolution 242. This contradicts Trump's plan, which would take away Palestinian lands, including most of East Jerusalem.

“To reactivate the Oslo path, truce agreements between Israel and Palestinian factions in Gaza — most notably Hamas — should last until Palestinian factions [Hamas and Fatah] can reconcile, allowing presidential and parliamentary elections to be held in both Gaza and the West Bank with the aim to unify Palestinians under one authority. Haniyeh’s and Meshaal’s presence in Gaza was an obstacle to [a truce] with Israel, reconciliation with Fatah and holding elections,” Helmy added.

Haniyeh had repeatedly threatened to halt the truce talks with Israel in the past, before the US peace plan was unveiled.

He and Meshaal were also at the head of the Hamas political bureau during the operation that resulted in the expulsion of PA President Mahmoud Abbas and Fatah from Gaza in 2007, and the announcement of Hamas' defection from the Palestinian presidency. This resulted in a split into two Palestinian authorities: Hamas in the Gaza Strip and Fatah/Abbas in the West Bank.