Is Hamas on the offensive or defensive?

Hamas believes that Israel will attack the Gaza Strip again at some point, which is why it keeps arming itself and developing its rocket project. 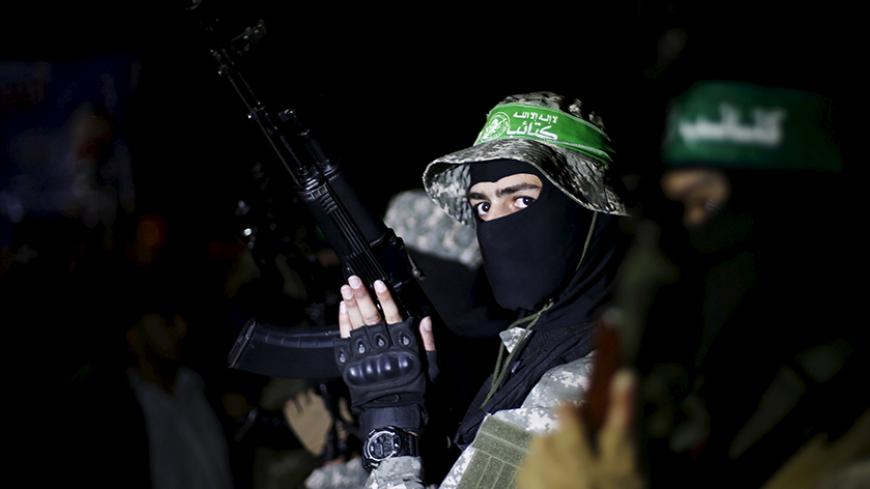 In a briefing for the Israeli press April 14, a senior officer in the Southern Command reported that Hamas is busy rehabilitating its military strength. According to him, ever since the 2014 Operation Protective Edge, Hamas has been increasing its Nokhba (elite fighting unit) forces to 5,000 troops and focusing on the development of high-trajectory short-range rockets, which proved to be more efficient than the Grad rockets shot down by the Israeli air defense system Iron Dome.

“Hamas is a highly intelligent enemy. They surprise me and learn their lessons very quickly,” said the senior officer by way of summary.

Past experience shows that after every round of fighting with Israel, the military wing of Hamas not only improves the ordnance at its disposal, but also adapts and adjusts its doctrine of warfare.

During Operation Cast Lead (2008-2009), the Hamas army had no response to the Israel Defense Forces (IDF) ground forces that entered the northern part of the Gaza Strip. As far as the Izz ad-Din al-Qassam Brigades were concerned, the territory had been abandoned. Armed Hamas militants swapped their uniforms for civilian clothing and quickly ran for cover deep in the Gaza Strip. After the operation, Ahmed Jabari, the person considered to be acting commander of the military wing of Hamas (and who was killed by Israel in 2012, right before Operation Pillar of Defense) ordered Hamas to improve its ground capabilities so that they could withstand Israeli ground forces if and when they invaded Gaza again.

Jabari decided to dig tunnels, which would surprise the “Zionist enemy,” and get behind the IDF forces in any way possible. All that mattered, as far as he was concerned, was to ensure that the Gaza Strip would not be abandoned again and Hamas be left without any response.

Israel was taken by surprise when it discovered Hamas’ tunnel project during the course of Operation Protective Edge. Nevertheless, it also showed that the elite Nokhba forces that burst out of the tunnels, which were excavated for years beneath the localities surrounding the Gaza Strip, were too small and ineffective. Its ambushes may have been harmful to IDF troops, but the forces weren’t significant enough to determine the course of the campaign or deter Israel. Now, however, the senior officer said, those elite Nokhba units make up one-quarter of Hamas’ military forces.

Apart from expanding the Hamas ground forces, the movement’s military wing is developing higher trajectory rockets with a greater explosive load capacity. Hamas regards this as the answer to the Iron Dome missile defense system, which shot down most of the Grad rockets fired at Beersheba, Ashdod, Rishon Lezion, Tel Aviv and even Jerusalem during operations Pillar of Defense and Protective Edge.

There can be no doubt that militarily, what Hamas really wants is to threaten Israel’s major cities, but there are dreams and then there is reality. The underlying impression is that right now, the heads of the military wing have decided to focus on reality. The Grad rocket program has been abandoned, not only because of Iron Dome, but also because aid from Iran has been cut and the tunnels have suffered tremendous damage.

High-trajectory rockets have been developed in Gaza since 2001. The Qassam rocket quickly became the flagship project of Hamas’ military wing, creating what it considered to be a balance of deterrence. Until then, Israel could allow itself to do whatever it wanted in Gaza, but now in every military operation, it must take into account that Hamas has the option of employing a deterrent.

The Israeli media reported extensively this week about the “Hamas threat” as presented by the senior officer from the Southern Command. On the other hand, from Operation Cast Lead until now, Hamas' military wing’s considerations regarding the development of its military capacity and a change in its military doctrine were based mainly on the fear that Israel would invade Gaza and attempt to overthrow the Hamas regime.

Hamas’ current considerations indicate that the organization is following a doctrine of defense more than a doctrine of offense. For a long time now, the movement’s leadership has been relaying the message to the people of Gaza that Israel is preparing for another round of fighting. The underlying impression is that this is not some propaganda campaign intended for the people of Gaza. Hamas really is convinced that the IDF is conducting the requisite training, collecting intelligence and studying past operations all in an attempt to force change in Gaza by evicting Hamas.

One of the rules that has guided Hamas since it was founded and its military wing was established is recognition of the limits of force, or in other words, “controlled violence,” as scholars Shaul Mishal and Avraham Sela describe it in their book, “The Palestinian Hamas: Vision, Violence, and Coexistence.” This was true when Hamas operated through terrorist cells, and it is true now as well, with Hamas operating as an organized army. Now, however, Hamas is weakened and deterred. Even the most combative factors in its military wing are aware of their miserable situation. Hamas is aware that if it exceeds the threshold in provoking Israel, it will lose the campaign. That is why the strengthening of Hamas, now and in the past, is intended mainly to build up a deterrent against Israel.

Another factor that is propelling the military wing to continue expanding and strengthening itself is political. The military wing of Hamas effectively controls Gaza, and the stronger it is, the greater the status of its leadership within the overall movement.

Within the movement itself, there is an enormous power struggle underway between the military wing and a divided political wing. The same senior officer from the Southern Command came up with an original way to explain it. He said that Hamas' military commander Mohammed al-Deif turned people such as senior Hamas official and former Prime Minister Ismail Haniyeh into preachers who have no influence in the mosques.

The same internal power struggle existed in the time of Jabari, who threatened the movement’s leaders whenever they did something that he didn’t like.

Beyond all that, Hamas is also preparing for the “Day of Judgment,” when the movement is forced to break the siege on Gaza, after Israel or Egypt decides to tighten it.