Alon Ben David writes: That Hamas hasn’t replenished its supply of rockets lately is further proof of an ideological turnabout underway in the movement. 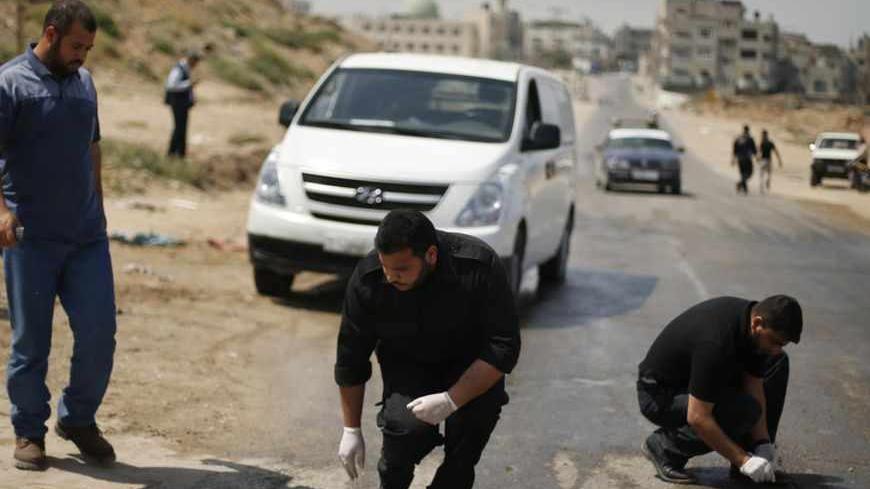 Palestinian policemen loyal to Hamas inspect the scene after an Israeli airstrike that killed a Palestinian in Gaza City, April 30, 2013. - REUTERS/Suhaib Salem

It’s well worth noting the change underway in Hamas. It has barely restocked its supply of rockets since Operation “Pillar of Defense,” it is arresting activists involved in shootings against Israeli targets, and it has shifted its efforts from building up its military force to maintaining peace and quiet.

This site has seen more than a few articles about the ideological turnabout underway in Hamas. It has transformed itself from a movement that adhered to terrorism and armed resistance into a movement striving to attain international legitimacy and which aims at coming to power throughout the entire Palestinian Authority in the upcoming elections.

There were clear indications that such a shift was happening: Not only was Khaled Meshaal, a “pragmatist,” re-elected chairman of the movement’s Political Bureau (April 1), but top Hamas official Mahmoud al-Zahar, a leader of the hard-liners, was ejected from the Hamas leadership. Then there was the statement by the Hamas government’s Deputy Foreign Minister Ghazi Hamad that “Hamas agrees to accept a state within the 1967 borders,” and the leadership’s vigorous efforts to have Hamas removed from the list of terrorist organizations.

Facts on the ground are further evidence of changes

Once the IDF completed Operation “Pillar of Defense” in Gaza (Nov. 14-21), Israel’s Southern Command conducted a situation assessment under the auspices of the Minister of Defense. This effort to gauge the operation’s real success was conducted to assist in future planning. Pessimists among the participants anticipated no more than a single week of quiet along Israel’s southern border. Optimists looked forward to two months of calm. No one predicted what would happen in Gaza in the next five months. Even in the first days after the operation, the Southern Command was shocked to see Hamas activists scattering groups of demonstrators who gathered along the border with Israel, and even administering beatings. This was the first indication that change was underway on the ground.

What happened was that in those same days immediately after the operation, Hamas' senior leadership conducted its own assessment of the situation. The participants included members of the movement’s political wing, but also of its military wing, which had just lost its commander, Hamas “Chief of Staff” Ahmed Jabari. (Jabari was killed in an IDF aerial assault while driving his car.) In effect, this action was the opening salvo of Operation “Pillar of Defense.” The group that convened reached the conclusion that the movement had suffered a crushing defeat.  Even though they managed to fire 1,500 rockets over the course of just six days, this had no lasting significant effect on the Israeli home front, which was protected by the Iron Dome defense system. In contrast, Israel managed to conduct a surgical assault from the air with relatively few civilian casualties. The Palestinian public could actually watch the skirmishing with relative indifference. Though the Hamas commanders were hardly happy to admit it, Israel’s methodical strikes against their private residences disturbed them.

Furthermore, Hamas leaders discovered that the Muslim Brotherhood, which had just come to power in Egypt, did not really “have their back” in their war against Israel. It had no real intention to help them in any substantial way. What happened was exactly the opposite: The Egyptians demanded that Hamas halt all military actions against Israel. As if that were not enough, they also launched a few effective measures to show how serious they were. They destroyed many of the tunnels used to smuggle goods from the Sinai to Gaza, and they forbade Hamas to import subsidized Egyptian oil from El Arish as an alternative to the oil that Gaza bought from Israel, even though Hamas could sell the Egyptian oil at an enormous profit.

Hamas got the message. Under Hamas political bureau leader Khaled Meshaal’s leadership abroad, it decided unanimously to stop firing at Israel and to focus instead on what it called “the project,” i.e., the expansion of its rule in Gaza to the West Bank. From that moment on, Hamas' main interest was to maintain quiet with the Zionist enemy, instead of living in a state of constant friction which led to rounds of intensified violence.

Hamas was actually quite zealous about enforcing a state of calm in the security “perimeter” along the Israeli border, a term that refers to the territory immediately west of the security fence encircling the Gaza Strip. The IDF prevented anyone from entering that zone, including local farmers. Now, however, it was Hamas itself that barred civilians from getting within 100 meters [109 yards] of the fence and its own armed forces from coming within 500 meters of it.

Hamas even had some success, if only partial, in preventing the firing of rockets and Qassam missiles at Israeli settlements surrounding the Gaza strip. Ever since Operation “Pillar of Defense,” some 20 rockets were fired at Israel from within the Gaza Strip, but these were fired by what the Israelis call “rebellious organizations,” another term for global jihadist organizations, which are motivated by the most extreme religious ideologies. Every time a rocket was launched, Hamas' internal security forces were quick to arrest anyone they thought might have been involved. The detainees were interrogated (in ways that the B’Tselem human rights organization would deem unacceptable), and some of them are still in prison.

But the real test case for the political and military changes underway in Hamas occurred in the last week. For the first time since Operation “Pillar of Defense,” Israel targeted [and killed in an April 30 airstrike] a single terrorist in the Gaza strip. Hitam al-Mashal was an expert in the manufacture of rockets, who worked as a freelancer for several of the radical organizations in the Gaza Strip. He supplied the rockets that were fired from the Sinai at Eilat in April. The war-tried residents of southern Israel could already foresee that they would be forced to spend another night in their shelters, but this time something unusual happened. Hamas did not respond. But that was not all. Immediately after the event, Hamas warned the other organizations that anyone who dares to fire rockets at Israel would be arrested at once.

No less intriguing is that as of now, Hamas has still avoided restocking its arsenal of rockets. It fired 1,500 rockets during Operation “Pillar of Defense,” and several thousand more were destroyed in Israeli attacks. Nevertheless, Hamas made a conscious decision that, for the moment, it prefers not to import more Fajr and Grad rockets into the Gaza Strip.

No, Hamas has not turned into a “lover of Zion.” It also has no intention of forsaking the cause of resistance, which is an intrinsic part of its very name. As a member of the axis of Muslim Brotherhood entities in the region, which includes Turkey, Egypt, Qatar, and some of the rebels in Syria, Hamas has simply decided to act responsibly on behalf of a greater interest.

And this interest means that jihad against Israel can wait.