Is Hamas Laying a Trap For Fatah in West Bank?

The rally in support of Fatah in Gaza last week does not necessarily mean reconciliation; it might be a sign of Hamas' ambitions in the West Bank, writes Shlomi Eldar. 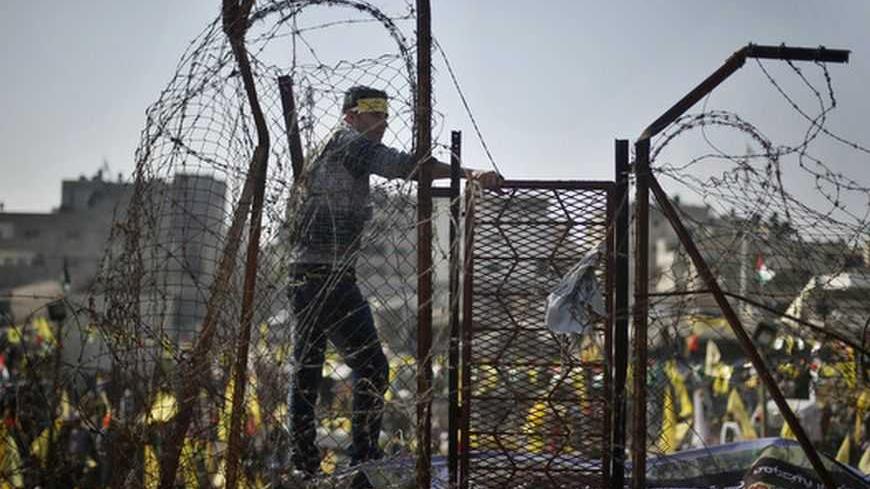 A Palestinian takes part in a rally marking the 48th anniversary of the founding of the Fatah movement, in Gaza City January 4, 2013. - REUTERS/Mohammed Salem

The Gaza Strip has always been full of surprises, and it knows how to set up a sting. As its residents are proud to say, the element of surprise is an integral part of their DNA. And so, another surprising event, possibly of historic proportions, took place in Gaza late last week. Just one month after Operation “Pillar of Defense” and as a direct consequence of the pervasive feeling that they defeated Israel, Hamas allowed Fatah to hold a rally in Gaza with hundreds of thousands of supporters.

So what was the sting? We’ll get to that in a bit.

Back in June 2007, Hamas launched a coup in the Gaza Strip. Upon seizing power, they sent the entire Fatah leadership packing with their tails between their legs. Now, for the first time since the coup, a quarter of a million people from across the Gaza Strip could gather to mark the 48th anniversary of the founding of the Fatah movement.

By the way, the number 48 has particular significance for the Palestinians, just as it has for us. It seems as if this event to mark 48 years of Fatah was a moment in which old glories were restored or, to be more precise, a time for the Palestinian people’s national liberation movement to recover its dignity after such a devastating humiliation. And humiliation is not a reference to the Nakba either. Actually, it refers to the expulsion of the Fatah leadership from Gaza by Hamas.

From the coup to “Pillar of Defense” in November 2012, Hamas would not let Fatah activists to so much as raise their heads. It was forbidden to fly the yellow flag under any circumstances, and in some cases all it took was to say the name Fatah to get a person in trouble. As for holding a rally in support of Fatah, that was absolutely out of the question, even if only three people showed up. It would be considered an act of subversion, undermining the unchallenged rule of the Hamas movement in the Gaza Strip.

But what was surprising was not just the sea of fluttering yellow flags in a place where once it seemed that not a single yellow flag was left to cut up for bandages. The really big surprise was that Hamas allowed it. And that’s not all either. It even helped to organize the mass rally, provided a large space to hold it and arranged logistical support. Hamas even allowed Fatah to stage a historical production by the famous troupe “Band of the Beloved.” Its members, Palestinians from Syria and the refugee camps in Lebanon, were allowed to enter Gaza through the Rafah border crossing.

That’s how things looked on the surface. It might even be considered a dramatic day for Fatah in Gaza, a moment of heart-warming reconciliation that brought the people together, if you will.

But the picture was entirely different just beneath the surface. This is where the sting comes into play.

It is reasonable to assume that Hamas is using gestures such as this to try and distract Fatah, so that it can carry on with its planned takeover of the West Bank. What is interesting is that even Fatah activists in the West Bank and Gaza recognize this as a sting operation. They realize that every party has a price. From the lowest-ranking members to the highest echelons of power, from the youngest members to the most experienced, from new recruits to battle-scarred veterans, everyone knows that if Hamas is willing to swallow its pride and allow them to raise their yellow flags in the Hamas home court, there must be a reason for it.

The general consensus among all the people I spoke with over the past few days is that Hamas is planning a strategic change of course. After “Pillar of Defense” and the sense of euphoria that pervaded Hamas, the movement made the decision to take a step forward in governing. It is a step forward because until now, the movement hasn’t shown any real political ambitions in the West Bank, either before it won the 2006 elections, or, more importantly, afterward. The movement’s leadership did not believe that they were even capable of taking over the entire Palestinian Authority and preferred to avoid a conflict with Israel while being forced to hide behind the West Bank’s vague borders.

Think about it. If they are already exposed to IDF attacks in Gaza (with Ahmed Jabari as a case in point), what will happen to the leaders of any Hamas government to be established in Ramallah, just five minutes from the first IDF checkpoint?

That was why Hamas preferred to tighten its hold on Gaza instead. It focused on breaking the siege that Israel imposed on it since the coup, while leaving the question of the West Bank for other times and future generations.

Even the IDF’s assessments, which were received and internalized by the Israeli political leadership, claimed that Hamas knows how to read the map, at least for now. Furthermore, the distinction between Hamas in Gaza and Fatah in the West Bank played right into Israel’s hands, and Israel did not hesitate to bolster it. This was a classic case of divide and conquer. There would be an inter-Palestinian balance of power, without any unnecessary headaches.

But now, all of a sudden, there’s been a change in plans. Hamas made two strategic decisions: first, to start organizing now for the next elections in the Palestinian Authority with all the energy that they can muster up, and second, to win them. To put it more simply, they want to take over the West Bank and complete their takeover of the entire Palestinian Authority.

Hamas — and that includes all its branches in Gaza, the West Bank, overseas and even in Israeli prisons — is convinced that the conditions are ripe to put a Hamas candidate up for election and, they hope, replace Abu Mazen.

The popular assessment is that Egypt will support the move. The emir of Qatar, Hamad bin Khalifa al-Thani, was the first head of state to visit Gaza under Hamas, pouring money in every direction, so he is expected to help. As for King Abdullah of Jordan, that noble neighbor to the east can’t really oppose the move either. He already reconciled with Meshaal and Mousa Abu Marzook a while ago in Amman. Besides, he has enough problems with his own Palestinians.

And what about Israel? It’s irrelevant, as far as Hamas is concerned, and will be even more so once victory is achieved.

It’s hard to predict what the future Hamas government will look like, but one can venture an educated guess. Ismail Haniyeh will continue to be prime minister. Mousa Abu Marzook can already start sewing the new suit he will need as head of Hamas’s Politburo. Everyone I spoke to in Hamas happens to agree that he will be replacing Khaled Meshaal — that’s the reason why Ismail Haniyeh withdrew his candidacy for the position.

And Meshaal himself? Just a few weeks ago he announced that he would be resigning as head of the Politburo because he’d “had enough.” Now he’ll be appointed chairman of the Palestinian Authority instead of Abu Mazen.

But in order to implement this plan — and this brings us back to the sting — Hamas must first reconcile with Fatah. Without reconciliation there can be no elections, and without elections there can be no chance of implementing the movement’s new strategy, which emerged in the wake of “Pillar of Cloud.” To achieve this, Hamas is swallowing its pride and allowing Fatah to celebrate its founding in Hamas’s own backyard.

In order to achieve this greater objective, Hamas was willing to allow a live broadcast of the speech that Abu Mazen delivered in Ramallah, promising that victory was very close. One can only wonder what victory he was talking about: over Israel, or over Hamas?

It may come as a surprise that Fatah activists are very aware of Hamas’s sting operation. And yet, not only are they doing nothing to stop it, they are actually cooperating.

“Why don’t you do something?” I asked several of them. “Why are you letting them lead you along?”

The answer I got was no less surprising: “It will be okay. We also have plans. True, Hamas wants elections, but this time we’ll win. It will be okay.” That is, by the way, exactly what they said before the 2006 elections.

So now, after Fatah has begun to show signs of waking up to the Hamas strategy, it is time to wake up Israel’s leaders too. The same people who did not want Abu Mazen may end up with Khaled Meshaal five minutes from Kfar Saba.

Hello, good morning! Is anybody listening?