For Hamas leader Khaled Meshaal, there is no contradiction between attempting to reach a political agreement and the vision of Greater Palestine, writes Shlomi Eldar. 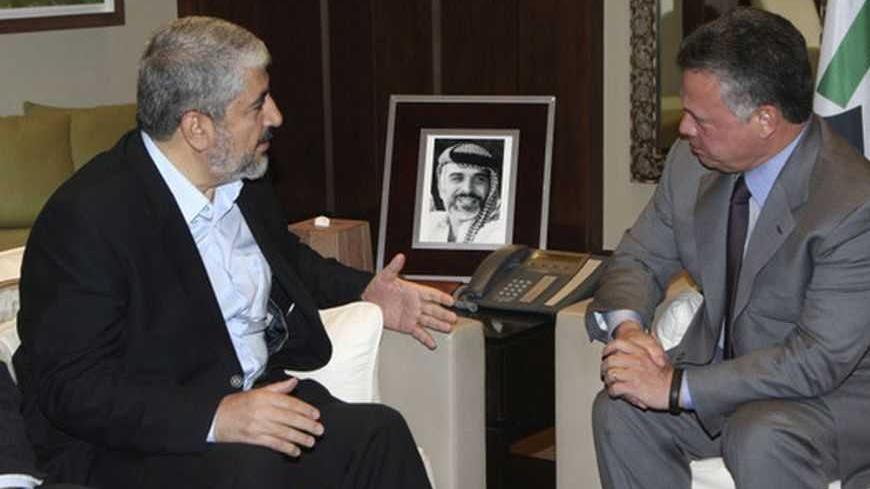 Plenty of people must have rubbed their eyes in disbelief when they read the headline a few days ago, as provided by the Saudi newspaper Asharq Al-Awsat. The paper reported that the head of the Hamas Politburo Khaled Meshaal authorized Jordan’s King Abdullah to relay a message to US President Barack Obama, saying that Hamas is prepared to accept the principle of a two-state solution. To put it more simply, Hamas agrees to the ’67 borders. This stands in complete contradiction to the well-known and well-publicized ideology of Hamas, which Meshaal made a point of expressing in a speech he gave in Gaza just two months ago. In that historic speech, which he delivered after “Operation Pillar of Defense,” Meshaal declared before a cheering crowd that:

“Palestine was and will remain Arab and Islamic. We will not recognize the legitimacy of the Occupation, and we will never recognize Israel. No matter how long it takes, Palestine will be ours from the River to the Sea, from the North to the South.”

It certainly is a contradiction, but in appearance only. Anyone who has followed Meshaal’s thought processes, or the thought processes of Hamas’ other leaders too for that matter, would never define it as such. The difference between these two positions is like the difference between a dream and reality. Palestine is both Arab and Muslim in Meshaal’s world view, and he will never be able to abandon the idea of a Greater Palestine stretching from the Jordan River to the Sea (does that remind you of anyone?). That is the utopian ideal.

At the same time, Hamas’s leaders, and especially Meshaal, have come to realize over the years that without having two feet (or at least one foot) planted firmly on the ground, the organization has no right to exist. Furthermore, they have come to realize that this even means compromises and negotiations (albeit indirect negotiations) with the Zionist enemy. That is the reality, and it is stronger than any dream or covenant (the Hamas Covenant, released in September 1988, defined the boundaries of Palestine as “sacred waqf lands,” making any territorial concessions an act of heresy and a betrayal of the religion).

So, the contradiction does indeed exist, but only in a logo-semantic sense. In the political-diplomatic realm of the Middle East, there is no contradiction between attempting to reach a political agreement and the vision of Greater Palestine. Anyone can dream. The trick is to do it with their eyes wide open.

Nor is this the first time that Meshaal stated one thing publicly, while sending contradictory, conciliatory messages of compromise to the Israelis. In my book "Getting to Know Hamas," I disclosed the extraordinary channel of communication that existed between Meshaal and the then-head of Israel’s Shin Bet (Israel's Internal Security Agency), Yuval Diskin. Shortly after winning the elections in the Palestinian Authority [January 2006], Hamas’s leadership realized that their stubborn refusal to recognize Israel and their calls to carry on the jihad not only isolated Hamas in the international arena, but also put all the power they had accumulated at risk. In fact, it could actually lead to the dissolution of their democratic victory in the Palestinian elections. A political settlement with Israel would ensure that Hamas could overcome the boycott of an international community that insisted and continues to insist on recognition of Israel as a prerequisite for recognition of Hamas and its government.

It was with this understanding in mind that in May 2007, Khaled Meshaal commissioned a foreign emissary to relay his proposal to the then Head of the Shin Bet Yuval Diskin. That proposal was actually intended for Prime Minister Ehud Olmert. The ensuing dialogue between Israel and Hamas — or more correctly, between Meshaal, Olmert, and Diskin — lasted about half a year. These are the basic components of that dialogue, as I described them in my book:

The title of the document (or rather, “non-paper”) that was ultimately relayed to Prime Minister Olmert was “Peaceful Coexistence.” In it, Hamas proposed the following two-tiered dialogue:

1. Discussions surround a bundle of steps, including a ceasefire and measures to restore stability in Gaza, which respond to the main concerns of both parties and serve to build trust in advance of more long-term moves.

2. A decision to enter into an extensive dialogue, advanced by a third party, surrounding the long-term vision of peaceful coexistence.

The remainder of this six-page document presented Hamas’s strategy, which can be boiled down to the following:

“The Hamas vision, and the ensuing agenda of this dialogue, includes a framework for coexistence over a period of 25 years, to be distinguished by non-violence and a commitment that this process will lead to the establishment of a Palestinian state based on the 1967 borders, through a process of negotiations.

“It is agreed to postpone the most difficult issues, including the question of refugees and the final status of Jerusalem, to some indeterminate date in the future. Nevertheless, this agreement is based on the expectation that until that date, Palestinians will enjoy a special status in certain neighborhoods of Jerusalem.”

The document ends with a surprising proposal:

It should be noted that Ehud Olmert denied what I published ever happened. So did Izzat Rishak, who is in charge of foreign relations for Hamas. He published his denial on his Facebook page. Nevertheless, all the details that I revealed in my book have been documented and confirmed.

Six years later, Meshaal is still flaunting contradictory statements, which can only be understood when placed along the continuum between the dream world and reality.

With this background in mind, it is worth noticing another move currently under way. This week the Al-Quds al-Arabi newspaper offered a report, supported by Palestinian sources, that Qatar, Jordan, and other Arab states are behind a move that would eventually lead to Meshaal replacing Palestinian Authority President Abu Mazen as the head of the PLO. As everyone remembers, the PLO did sign a peace agreement with Israel. In the context of this new position, which Meshaal really wants, he will be obliged to recognize the Oslo Accords signed by Yasser Arafat.

A month ago, I published an article in Al-Monitor in which I offered my assessment that Meshaal is looking for a bigger role than head of the Hamas Politburo. He has already made his decision to take steps toward a political settlement that would allow Hamas to become established and win international recognition as a legitimate organization.

The big question now is how Israel will respond. Will the new Netanyahu government make the same mistake as all of Israel’s previous governments and try to force Hamas into a corner again?

As for Meshaal, he will have to understand that if he really wants to bring Hamas out of its isolation — if he really wants to reach a political settlement with Israel — he will have to stop denouncing and intimidating Israel in his speeches. It is almost impossible to conduct a public dialogue in Israel about the possibility of conciliation with Hamas when Meshaal’s calls for the country’s destruction continue to reverberate from Gaza. It simply won’t work.

It’s time for Meshaal, Hamas, and Israel to grow up and realize that it’s time to start being logical. How did Netanyahu put it in his speech to the UN? It’s time for “straight talk.” Then come on. Let’s do it.