After having been ideologically committed to Israel’s destruction, Hamas is facing the dilemma of either recognizing Israel or losing power, writes Adnan Abu Amer. 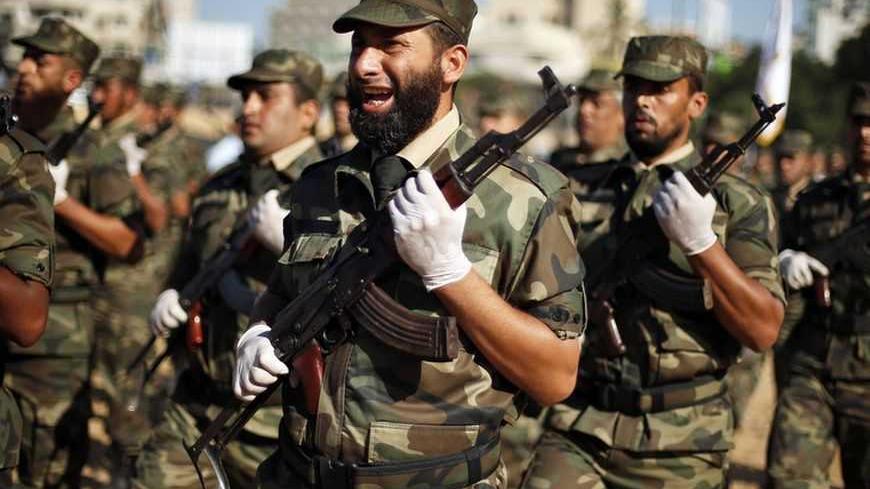 Recently, a lot has been said — and a lot of denials have been issued — about Hamas recognizing a two-state solution. It appears that Hamas is still vacillating between explicitly and implicitly recognizing Israel. Hamas realizes that recognizing Israel would open up the world’s doors to the movement. At the same time, Hamas knows that such a move would be seen as a betrayal by the movement’s supporters, both inside and outside Palestine.

As Hamas well knows, its legitimacy derives from its vocal support for armed struggle within the complicated Palestinian reality. Hamas also knows that it will pay a heavy price if it is seen to be agreeing to international conditions. The cost will not only be political, but also ideological.

Hamas has spent many years talking and writing about its notion of the state, its identity, borders, concept, constitution and the role of Islam within it. Generations of Hamas members were raised on those ideas. But those ideas have remained part of the imagination and heritage, and of the nostalgic dream of restoring the Islamic caliphate.

The concept of the state

Today’s debate within Hamas over the concept of the state is more concrete than theoretical. The political conditions in the Palestinian territories do not allow for dreaming about unrealistic grand theories being promoted by some Islamist movements. Hamas is facing real-world problems that require real-world solutions. The Palestinian state being envisioned by Palestinian, Arab, and world politicians is based on the June 1967 borders. But does that fit Hamas’s political vision and intellectual orientation?

Generations of Islamists have been raised on the concept of the “Islamic state,” which is synonymous with the Islamic caliphate. But Hamas’s situation is a little different. Israel’s occupation of all Palestinian territories is a political and concrete obstacle to the dream of an Islamic state and it forces the consideration of more realistic options. So we have started hearing, from Hamas, statements about establishing a Palestinian state on the June 1967 borders.

There is no doubt that this development is an intellectual and political shift by Hamas. More than 20 years ago, Hamas founder Sheik Ahmed Yassin proposed a long truce with Israel. But today, such a proposal is more realistic and is attributed to Hamas’s current leader Khaled Meshaal. Hamas in 2013 is different than Hamas in 1993. Hamas is now an influential player and its statements and stances are taken into account by regional and international decision-making circles.

The shuttle diplomacy by Western officials between Gaza, where Hamas’s domestic leadership is located, and the Arab capitals of Doha, Cairo and Amman have only one objective: getting Hamas to agree to the conditions that would allow it to be embraced by the international community. In other words, they want Hamas to agree to the two-state solution. And that, explicitly or implicitly, essentially means that Hamas has recognized Israel’s right to exist!

Those who have been following Hamas’s course since it was founded 25 years ago notice that every once in awhile there is international pressure to make Hamas agree to those conditions. But Hamas is afraid to fall into the same trap that others, like Fatah, have fallen into without getting anything in return except loss of popular support, as was demonstrated in the elections seven years ago.

In light of the demands that the movement should recognize the two-state solution and make political commitments, some influential circles within the Hamas leadership think that the movement is being drawn into going beyond its rational political discourse and how it deals with the reality on the ground, and into recognizing Israel and exchanging messages with it.

However, the siege has made the Palestinian territories miserable. So decision-makers in Hamas are forced to issue hints and signals that do not affect the movement’s general principles. Those signals, however, may be misunderstood. And this is where the problem lies. No one thinks that Hamas supporters will make a big deal of those signals, but any concrete steps toward recognizing Israel will cost Hamas dearly, something which I don’t think Hamas wants during this dangerous phase.

At the external level, Hamas’s enemies and opponents may think that the siege has finally paid off, albeit a little late, and that Hamas’s current declarations are signals that, if the siege and the Palestinian suffering continue, the movement may explicitly recognize Israel, which would open the “appetite” of Hamas’ opponents for more breakthroughs in its ideology and principles.

Not an existential conflict, but a border dispute.

Although Hamas is aware of all that, it should be noted that in a few months it is facing elections during which the movement’s signals that it may accept a two-state solution will be used in a fierce anti-Hamas campaign. Even though the movement has provided a different administrative performance than before, the fundamental change in the movement’s political program may be a decisive factor for the Palestinian voters.

As Hamas is being smothered, with a few breaches here and there, the demands that it should recognize Israel are ongoing and without letup. In other words, Hamas must choose between recognizing Israel to stay in power, or losing what it has achieved democratically as punishment for having to refused to bow to the world’s conditions.

In reality, the international community has not significantly changed its relationship with the Palestinians, including Hamas, over the past months and years. There has only been some cosmetic and tactical changes. Washington, the European Union and the UN have not only signaled to Hamas that it should join the “broken and paralyzed” peace process, they have also insisted that the Palestinians explicitly recognize Israel. But this time, those powers are armed with an “Islamic religious cloak,” which would make a recognition of Israel more meaningful, especially since Hamas considers its conflict with Israel to be an ideological “existential conflict, not a border dispute.”

That pressure is accompanied with a financial and economic blockade, which is increasing the pressure on Hamas, especially since those carrying out the blockade are blocking anything that would alleviate Palestinian suffering. It is clear that they want to punish the Palestinians for electing Hamas and warn them against reelecting them; that is if the reconciliation succeeds and the elections happen on time.

It should be noted that certain Israeli and Western research institutions have estimated the timeframe that Hamas will need to explicitly recognize Israel. They may accept from Hamas certain rhetorical signals for a while before the movement officially recognizes Israel.

Since Hamas was founded in late 1987, it has been conducting an ideological and political campaign for its members and supporters against recognizing Israel. Hamas’ constitution says that Israel is a “cancer that must be eradicated,” and that “its demise is a Quranic inevitability.” Those and other slogans have been a key component of Hamas’s political discourse. It is therefore not easy for Hamas to change overnight due to political realism and suddenly tell its supporters: We shall recognize Israel, but it’s under duress!