Before getting into another round of fighting in Gaza, Israel must use its nonmilitary tools to stop the tunnel digging that Hamas has continued to pursue so vigorously. 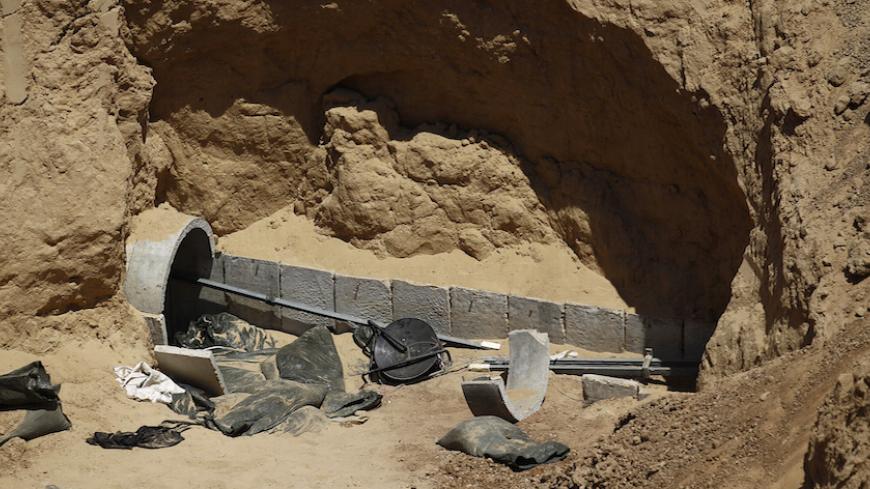 Part of a tunnel exposed by the Israeli military is seen on the Israeli side of the Israel-Gaza border, Aug. 14, 2014. - REUTERS/Amir Cohen

“Hamas has gone back to digging tunnels, and it is likely that at least one of them has even crossed the border,” Knesset member and member of the Foreign Affairs and Defense Committee Omer Bar-Lev said May 17. “If I were the defense minister, I would instruct the Israel Defense Forces to launch an operation tonight to destroy those rebuilt tunnels.”

The Israeli defense establishment and Israeli decision-makers have been well aware for many months of Hamas' rebuilding of the tunnels that were destroyed during Operation Protective Edge in August 2014. Hamas is not trying to hide its flagship project and has been pursuing it vigorously. The organization’s military wing, the Izz ad-Din al-Qassam Brigades, has invested immense resources in the project, while ignoring the deplorable condition of the population in the Gaza Strip, where things have worsened since last summer’s operation and the closing of the border with Egypt in December 2014.

The tunnel reconstruction project resumed a few weeks after the end of Operation Protective Edge. It employs hundreds of Palestinian workers as well as heavy transportation machinery. Palestinian men are fighting for the privilege of working in the tunnels, since this is their only chance to find work in the unemployment-riddled Gaza Strip. This intensive activity along the Israeli border has fully exposed the tunnel-digging and fortification project for all to see.

The defense establishment rejects the allegation by Bar-Lev that at least one Hamas tunnel has crossed the border into Israel. But members of Kibbutz Nirim in the western Negev Desert claim that a private company whose services they retained carried out a comprehensive inspection, which showed a high probability of a tunnel under the houses in the kibbutz.

Regardless of whether Hamas has been able to cross the border with Israel within 10 months, there is no question that this is its goal, and one that it has been pursuing strenuously. Before long, the project will get to the point at which dozens of tunnels are primed and ready for a strike in Israel. To date, Israel has apparently not taken any pre-emptive measures. Unlike on the eve of Operation Protective Edge, there is no dispute today over whether the defense establishment has intelligence about the scope of the tunnels and their real threat to Israel’s southern communities. Today, the threat is in the open.

Israel now faces both a military and diplomatic dilemma. If the IDF were to embark on another campaign in Gaza to destroy the tunnels, as Bar-Lev suggests, it is abundantly clear that it will not stop at the border. Instead, it will evolve into a large-scale operation with all the implications of such a move, namely rocket fire at Israel, a ground offensive and airstrikes in Gaza, fighting in densely populated areas and civilian casualties as well as further destruction of the infrastructure in Gaza, which is still licking its wounds in the aftermath of last summer’s fighting.

From an Israeli standpoint, another military operation in Gaza within a year will intensify the international pressure, regardless of the importance of the operation and the fact that destroying the tunnels is clearly a defensive need.

On the other hand, when the picture is so crystal clear and the danger so tangible, Israel cannot again sit idly by and continue to treat Hamas as if the threat doesn’t exist.

Israel has been forced in recent months to ease the blockade on the Gaza Strip. Supplies are shipped only via Israel, after Egypt sealed off the smuggling tunnels in Rafah. Had it not been for the recent more lenient approach and the allowance of raw materials previously banned by Israel, Gaza would have faced a humanitarian crisis by now.

Jerusalem’s only option now is to give the ultimatum to Hamas’ political and military leadership that unless the tunnel project is stopped, the rationed construction materials Israel is currently transferring to Gaza will stop, and little by little the easing of the blockade will end as well.

In recent months, Israel and Hamas have established an indirect communication channel, run by European diplomats, chief among them Swiss Consul Paul Garnier. Hamas’ Gaza-based political leadership has not denied the existence of these overtures, which aim to reach understandings for a long-term cease-fire between Israel and Hamas.

By using this channel as well as another via Qatar, Israel can easily communicate its unequivocal message to Hamas: Either the tunnel project ceases now, or the blockade will be significantly intensified, thus potentially putting Hamas' rule in jeopardy.

In the past, I submitted that Israel’s blockade on Gaza after Hamas seized power by force was a colossal mistake that only bolstered Hamas’ standing, prompting it to focus on the establishment of a military force that would fight to keep the border crossings open. But now the alternative is between a military operation in Gaza and its ramifications and the use of economic pressure, which is the only way to make it clear to Hamas that the tunnels could bring about its collapse.

Tightening the blockade will cause further deterioration in the population's situation. However, this is apparently the only deterrent at Israel's disposal before a military operation, which in turn could lead to civilian casualties and fatalities and more suffering for Gazans.

The rift between Hamas' military and political wings is a well-known fact and the crucial question remains whether the political wing is capable — given its current state — to order Mohammed al-Deif, the leader of the military wing, and other senior al-Qassam Brigades members to stop the project.

This possibility is uncertain. Nevertheless, before embarking on another round of fighting, Israel must use its nonmilitary tools to stop the tunnel digging. If an ultimatum doesn’t help and neither does economic pressure, Israel will be able to say in the next round that it did everything it could to stop the threat to its citizens and to avoid civilian casualties.

by Murielle KASPRZAK and Joseph SCHMID | AFP | May 26, 2022
END_OF_DOCUMENT_TOKEN_TO_BE_REPLACED