Hamas crisis could present an opportunity for Israel

According to Israeli assessment, the record-low point in which Hamas finds itself currently could either lead to a confrontation with Israel or to more moderate policies. 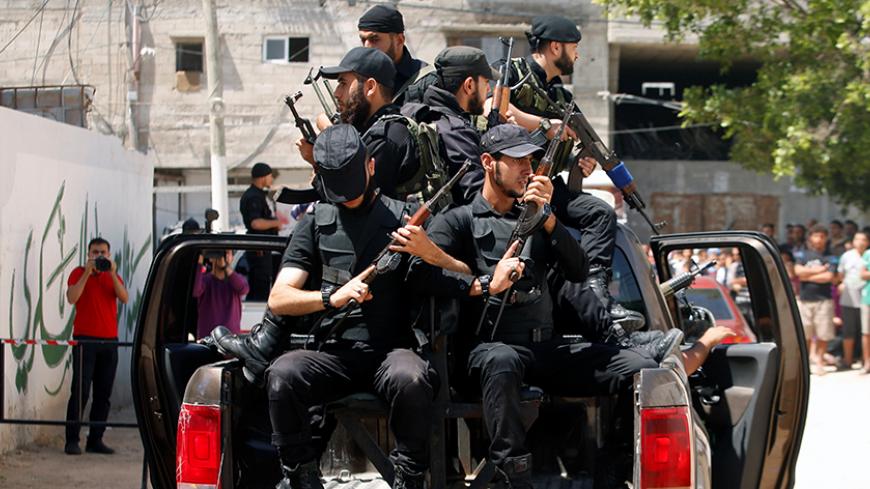 Members of Palestinian security forces loyal to Hamas ride a truck outside a Hamas-run military court where alleged collaborators with Israel are prosecuted, Gaza City, Gaza Strip, May 21, 2017. - REUTERS/Mohammed Salem

While the Israel Defense Forces (IDF) constantly train and ready themselves for the possibility of a military confrontation with Hezbollah on the northern front, tension is now increasing on the southern front opposite the Gaza Strip.

Gaza is undergoing a harsh humanitarian crisis due to the discontinuation of support from Qatar and the electricity cutback affair, where Palestinian President Mahmoud Abbas informed Israel the Palestinian Authority would stop paying for Gaza's electricity supply. In addition, Hamas leadership in Gaza will face an interesting challenge in the coming weeks when the IDF begins its earthworks for creating an underground barrier surrounding the Gaza Strip to prevent Hamas from digging cross-border attack tunnels.

Hamas Gaza chief Yahya Sinwar and Hamas military branch commander Mohammed al-Deif will have the whole summer to watch hundreds of heavy IDF engineering tools do underground digging surrounding the fence separating Gaza from Israel. Once this project is completed, Israel will be able to make it official and announce publically that Hamas lost its main strategic asset vis-a-vis Israel: the subterranean space, which is also the only space in which the organization can put up a real fight against the IDF, as was proved during Operation Protective Edge in the summer of 2014.

The Israeli Cabinet is deliberating over two conflicting evaluations of the situation. According to the first assessment, the humanitarian situation in Gaza has reached an all-time low. There is almost no electricity there, the drinking water is becoming increasingly polluted, and even going to the beach this summer will be problematic because the sea water is increasingly contaminated by an accelerated flow of sewage. Unemployment continues to be astronomically high at over 40%, Qatar is distancing itself from Hamas and Egypt is turning a cold shoulder. This reminds us of similar circumstances that led to the explosion in Gaza in the summer of 2014, only this time things are worsening with much greater intensity; it’s as if someone pressed the “turbo” button and accelerated the deterioration in fast-forward.

According to this first view, that’s the reason that Hamas tried to calm down its front with Egypt, at least. A few days ago, Sinwar crossed the Rafah passage to meet with the Egyptians. And according to the information that Israel received, Sinwar also met June 11 with former Fatah senior official Mohammed Dahlan, Abbas’ archenemy, who ruled the Gaza Strip until the Hamas coup in 2007. But Sinwar came home empty-handed to the Gaza Strip. The Egyptians continue to stiffen their positions and demand that Hamas hand over a large number of wanted terrorists in exchange for an easing of passage and economic restrictions and aid. It is unlikely that Hamas will capitulate to the demands.

Therefore, according to this situation evaluation, all the signs point to being harbingers of bad news: Even a small spark can, at this point in time, fire up Gaza again against Israel. Even though none of the sides have an interest in another round of fighting, such a spark could emerge at any given moment. For example, a Palestinian fence demonstration could spin out of control and stray bullets fired by an IDF soldier could kill several such demonstrators; these events would likely lead to a massive firing of rockets from Gaza to Israel; Gaza, in turn, would receive an aggressive Israeli response, leading to war.

Another scenario is that there might be a massive terror attack inside Israel. Hamas has been trying to carry out such an attack for a long time, and this, too, could bring on war. In the Gaza Strip powder keg, no spark is too small. Everything is volatile, explosive and flammable.

On the other hand, the security system’s intelligence sources are united in their opinion that Hamas is not prepared for another round of fighting with the IDF and that the current timing does not work for Hamas leaders. They have not yet replenished their rocket stockpile since the 2014 war and the attack tunnels were badly damaged. Popular support for Hamas among the population has declined and the organization is in deep, unprecedented distress. While this would seem to lower the probability of war, it does embody a latent threat: If Hamas feels that its back is to the wall, security sources told Al-Monitor on condition of anonymity, it is not unthinkable for it to orchestrate large-scale suicide bombings and hope for a miracle. There is nothing more convincing than photos of Israeli tanks blowing up Palestinian children to rehabilitate Hamas’ image in the world — or, at least, in the Arab world.

An Israeli intelligence source said on condition of anonymity that in the annual intelligence assessment coming up, the Israeli top political brass will hear that Hamas has reached “the low point in its evolution.’’ Israeli intelligence thinks that Hamas is not able to smuggle weapons, war materials and rockets into the Gaza Strip, due to a tightening of the closure and to Israeli and Egyptian activities. Against this background is the interesting approach of the Israeli security system to the changes evident in Hamas’ strategic documents that were published in May. For the first time since the organization’s founding, the documents do not explicitly call for the destruction of Israel, and even support the establishment of a Palestinian state on the basis of the 1967 lines.

An Israeli intelligence source said on condition of anonymity said this is not an explicit strategic change by Hamas; he described it as an “interesting change” and notes that Hamas is evidently making adjustments and corrections in its politics in light of the changing reality. “When the entire world categorizes you as a terror organization, doors are slammed in your face, your options are limited and the siege tightens. You need to understand the situation and make corrections,” a high-placed Israeli security source told Al-Monitor on condition of anonymity. “Hamas understood this and is now trying to free itself from the noose around its neck. It wants to be a legitimate organization and understands that its demand for Israel’s elimination deprives it of that status. They are not changing their skin, but are considering changing their behavior.”

Against this background, and in spite of the rising tensions that reach new heights every day, there are those in Israel who hold that the new situation carries the potential for new opportunities, in addition to dangers. Hamas’ distress and the pressures on it inflicted by the various players in the arena can help create a new reality. This reality could even include a kind of long-term cease-fire with Israel in exchange for international aid to rehabilitate the Gaza Strip and maybe even the first signs of demilitarization, or at least the cessation of increased militarization. This is the secret program that Israel is counting on. For it to work, all the players will have to cooperate: the Americans, Europeans, Egyptians and Qataris. “We are not there yet,” a senior Israeli source told Al-Monitor on condition of anonymity. “But it’s definitely worth a try.”