Heavy rockets fired from Gaza on Wednesday have sent Israel's military and political leaders into disarray while Egypt mediates a Hamas-Israel arrangement. 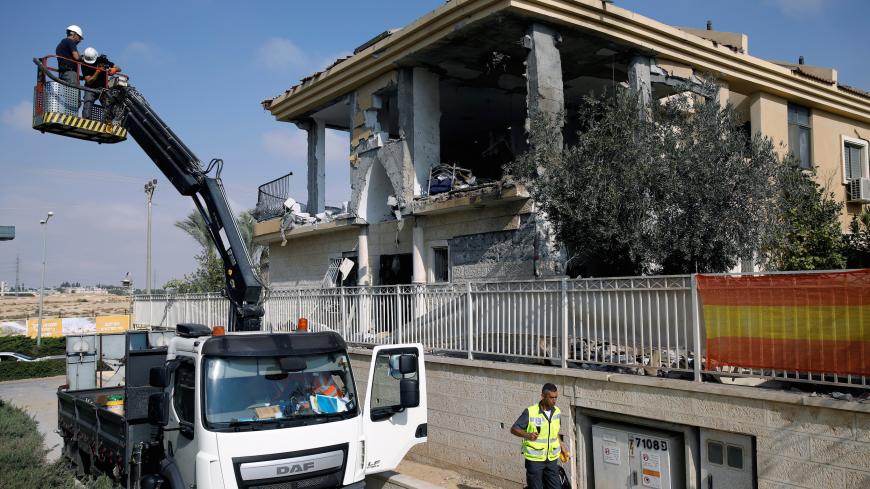 Israeli sappers stand on a crane as they work on a house that the Israeli military said was hit by a rocket fired from the Gaza Strip, in Beersheba, southern Israel, Oct. 17, 2018. - REUTERS/Amir Cohen

The rocket that hit a home in Beersheba on the night of Oct. 17 fell only seconds after the mother of the family had fled with her three children to a protected room in the basement. The rocket also landed on Israel’s security officials as a complete surprise. An additional rocket was fired northward that night; it fell into the ocean, opposite a large city in the Gush Dan metropolitan area. The authorities did not disclose the exact place.

The incident evokes memories of the summer of 2014, when Israeli intel kept telling the political echelon that Hamas isn’t interested in an escalation or another round of fighting. Now, too, the intelligence assessment is that Hamas “is not interested” — but the reality on the ground indicates otherwise.

“Anyone who fires a precise, heavy rocket at Beersheba and another one to the north is someone who wants to ignite the whole area,” an Israeli cabinet member told Al-Monitor on condition of anonymity. “We listen to intelligence reports and we know that these are well-based assessments. Still, what happened last night is very strange, and it will be Hamas who will be held responsible.”

By the afternoon, the Israel Defense Forces had cobbled together a theory that Hamas had no desire to fire those rockets. However, only Hamas and Islamic Jihad own rockets with those ranges. Therefore, the IDF placed the complete responsibility on Hamas’ Gaza head Yahya Sinwar and political bureau chief Ismail Haniyeh, and Israel’s air force delivered a round of air strikes at 20 targets in the Strip.

This event has already been labeled by Israeli intelligence sources “the strange case of the late-night rocket” because it happened in the very middle of talks conducted by Hamas in Gaza with a giant delegation of Egyptian intelligence, in an effort to save the arrangement with Israel. “Hamas knows that firing on Gush Dan and Beersheba is a call for war,” a highly placed military figure told Al-Monitor on condition of anonymity. “Hamas doesn’t want war now, but it could be that there are individuals in the group who want to complicate the situation and conduct sabotage from within.”

A great sense of confusion and embarrassment prevailed in Israel on Wednesday morning. The event took place in the midst of a public attack of right-wing Knesset members on the IDF and its chief of staff, Gadi Eizenkot. Their allegations were serious. One of the people heading the attack was former coalition chairman David Bitan, who accused the IDF of espousing an ineffectual policy in Gaza, losing Israel’s deterrence capabilities and taking no action in the face of the wave of violence on the border fence. In other words, only the IDF and the chief of staff are to blame, not the political echelon that is supposed to make the decisions and certainly not Prime Minister Benjamin Netanyahu, who holds overall responsibility.

Bitan’s statements seem to be Netanyahu’s way of playing both ends against the middle. He restrains his cabinet ministers and keeps quiet about Gaza, but then sends so-called “rebellious” Knesset members to incite the public against the chief of staff and the IDF, hoping that they’ll be the ones to feel the criticism. This is exactly what Netanyahu did in the 2014 Israel-Gaza conflict.

Defense Minister Avigdor Liberman has lost all patience. For several days already, he has been spreading the word that the time has come to inflict ‘’a serious blow’’ on Hamas in Gaza. In a conversation with Al-Monitor, Liberman emphasized, “This time we have to deliver a strong blow with all our strength, even at the price of an overall conflagration. The fact that Hamas stormed the fence violently on the very same day that we brought trucks full of diesel fuel into Gaza proves that anyone who thought that there was a chance for an arrangement with Hamas erred.”

Liberman is trying to create the impression that he opposed an arrangement from the beginning and always felt that there was no chance. While there is some truth in his argument, there is also politics as well. His cabinet counterpart, HaBayit HaYehudi chairman Naftali Bennett, is making mincemeat of Liberman among his electoral base on the right. Liberman, forced into the position of the responsible adult who must respect the assessments of Israel’s intelligence and security branches, painedly watches Bennett doing his political tricks. Liberman seemed to have reached the end of his rope this week. On Oct. 16, he was still in the minority in the cabinet. The majority, under Netanyahu’s leadership, still wanted to give efforts for an arrangement a chance. On the morning of Oct. 17, after the house in Beersheba was destroyed and an entire family was saved by a miracle, things looked completely different.

The question is: What now? Netanyahu is in trouble with his right-wing base. He is still deliberating whether to push up the elections and take advantage of his presently comfortable political position and his peak ratings. However, the prime minister is also coping with tribulations that threaten his electoral base: in other words, Liberman. Liberman, as defense minister, has not really taken off mainly due to criticism of the IDF’s weakness vis-à-vis Gaza fence protesters. While there are no cabinet members who think that the IDF should invade Gaza and conquer the Strip, there are quite a few members who feel that the IDF must deliver a very harsh blow to Hamas (while maximizing the IDF’s aerial abilities), in order to regain its deterrence power and bring quiet back to the Gaza Envelope. The problem is that such a blow could easily spark a round of fighting that becomes many times more violent and even ignites the West Bank. (A warning against such a scenario was sent by the chief of staff to his cabinet last month). The problem is that Netanyahu does not want to hear any of this during an election year.

The Israeli cabinet is supposed to convene this evening. The hope is that Hamas’ “prank” will be deciphered by then, as well as the firing of the two rockets. Sinwar’s position is no less precarious; he has done nothing to deliver the goods to the Strip's residents, who are chafing and groaning under their disintegrating infrastructure, all-time unemployment high and deteriorating living standards. In the midst of all this are the Egyptians and Qataris who are trying, in different ways, to extinguish the Gaza fire. The problem is that it’s being fed with endless fuel.