The Israeli government has been warned by the military that Gaza is on the verge of a humanitarian crisis and that Israel must act to avoid its total collapse. 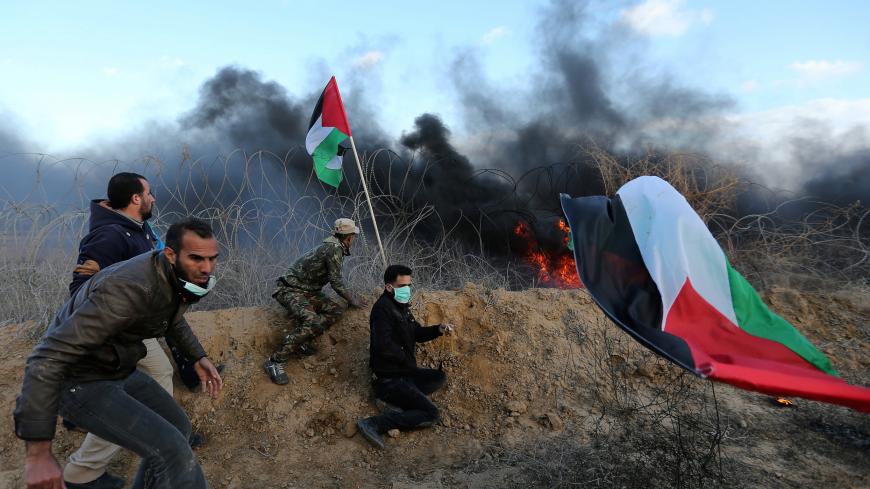 Palestinian demonstrators take cover during clashes with Israeli troops, as Palestinians call for "a day of rage" against US President Donald Trump's decision over Jerusalem, near the border with Israel in the southern Gaza Strip, Jan. 26, 2018. - REUTERS/Ibraheem Abu Mustafa

The winds of war buffeting the Gaza Strip increased on the morning of Feb. 4 when Lt. Gen. Gadi Eizenkot, Israel Defense Forces (IDF) chief of staff, made an appearance at the weekly Cabinet meeting. Eizenkot warned that Gaza is on the verge of collapse and susceptible to a severe humanitarian crisis. Any further deterioration would likely lead to a military confrontation between Israel and Hamas this year, although neither side is interested in war. Eizenkot added that significant steps by Israel are required to avert Gaza's collapse.

The next day, Israeli Intelligence Minister Yisrael Katz accused Defense Minister Avigdor Liberman and his people of “running around the world to raise money for Hamas.” Katz has floated the idea of creating an import-export terminal and entry-exit point off Gaza to lessen dependence on Israel. In recent years, he has preached in favor of Israel’s total separation from Gaza and imposing responsibility for it on Hamas, Egypt and the rest of the world. Liberman’s policy of keeping Gaza afloat, Katz charges, perpetuates Hamas' rule over the territory and dependence on Israel. As is often the case in the Middle East, these statements conceal drama under the surface.

On Feb. 3, the New York Times reported that over the last two years Israel had conducted at least 100 aerial assaults in Sinai against the Islamic State fighters making mincemeat of the Egyptian army and threatening to undermine stability on the peninsula. According to the article, Egyptian President Abdel Fattah al-Sisi personally authorized the attacks, which helped the Egyptian army regain control over the territory. The top secret assaults involved fighter jets, helicopters and drones. Israeli planes would sometimes fly south after attacking to create the impression of Egyptian jets returning home. The sorties exemplified Israel’s absolute military superiority in the region, complete with accurate intelligence that translated into the almost simultaneous launch of attacks.

Israel is ignoring the report, and military censorship has imposed a blackout on releasing any related details. Education Minister Naftali Bennett, a member of the Security Cabinet, limited himself on Feb. 4 to a general statement, saying, “Israel is not waiting for its enemy to reach its gates. We take action against our enemies far from our borders … and do not restrain ourselves from taking action anywhere.”

Without going into detail, there is no doubt that the security alliance between Israel and Egypt has never been stronger. That is what evidently allowed Prime Minister Benjamin Netanyahu to get away with snookering Sisi on two instances. According to regional experts, Egypt’s dependency on Israel continued to increase, so Sisi did not want to endanger their alliance.

The first time was during talks about two years ago with the Zionist Camp for the party to join the government and then launch a comprehensive regional peace process. Sisi actively put out feelers and even made a public speech inviting Israel to a regional conference. That is when everyone went to sleep at night thinking that Zionist camp leader Isaac Herzog would be foreign minister, but woke one morning to Avigdor Liberman as defense minister. Sisi was stunned. Are you playing games with me? he asked Netanyahu at the time. According to political sources, the prime minister rushed to placate him.

A few days passed and then at a joint press conference with Liberman, Netanyahu delivered the goods he had promised to Sisi: Netanyahu repeated his commitment to the two-state solution, and Liberman muttered something in favor of a Saudi-backed pan-Arab peace initiative. Netanyahu was also supposed to implement a quiet settlement construction freeze east of the separation fence and transfer territory from West Bank Area C (under Israeli control) to Area B (under joint Palestinian-Israeli control). The building freeze went through, more or less, but the Cabinet torpedoed the transfer of territory when Netanyahu defected to Bennett’s side at the last minute. Thus, the regional initiative died. Sisi belatedly grasped that the wool had been pulled over his eyes.

The second time Netanyahu hooked Sisi, the Egyptians, backed by US envoys Jared Kushner and Jason Greenblatt and the United Arab Emirates, jump-started the reconciliation process between Fatah and Hamas, and pushed for Palestinian President Mahmoud Abbas to return to the helm of Gaza. Netanyahu promised to assist in the initiative. “We would never have gone in this direction if Netanyahu hadn’t expressly told us to count him in,” a senior Egyptian official recently told Al-Monitor on condition of anonymity. Israel’s behind-the-scenes support for Palestinian reconciliation was reported in Al-Monitor.

Work on reconciliation proceeded with much fanfare. The Egyptians put everything they had into it. The process is now stuck, however. According to highly placed contacts involved in it, one reason is Netanyahu's flip-flop. After promising to help, he changed his mind and disappeared, pretty much as usual.

According to American sources and diplomats, Israel is now trying to curb Abbas and convince him to take a harder line against Hamas, although it had previously promised to do the opposite. As the fury in Cairo intensified, someone leaked the story of Israeli aerial attacks in Sinai, and Sisi’s discomfort morphed into a major problem.

The Israeli defense establishment actually supports the reconciliation process, as reflected in statements by Eizenkot. Both the IDF and Sisi were taken aback by the policies of Yahya Sinwar, elected Hamas' leader in Gaza in 2017. “We were concerned that we’d have to bring Sinwar down to size,” a senior Israeli security source told Al-Monitor on condition of anonymity. “But it turns out that the Sinwar we knew remained behind in the Israeli prison system. The Sinwar who came to the Strip is a different person entirely.”

Almost everyone was surprised by Sinwar's pragmatism and grasp of Hamas’ limitations and thus the decision to support the return of the Palestinian Authority (PA) to Gaza. “Sinwar doesn’t only want to be the king of the Strip, he wants to be the king of Palestine,” a senior Israeli intelligence source said on condition of anonymity. “He understands that as part of the process, Hamas will have to change its stripes.”

Now Sinwar faces a hopeless situation. The reconciliation process has hit a dead end. Hamas has paid the price, but has not received the goods. Sinwar’s rhetoric has been shifting in recent weeks, and the winds of war are again blowing. The last thing Hamas needs now, however, is another round of fighting with Israel. It is in much worse condition than it was before Operation Protective Edge, in 2014. On the other hand, it may have no alternative. That is why Eizenkot cautioned the Israeli government this week.

The worst wars are those that are unnecessary and gratuitous. Netanyahu must decide what frightens him more: a military flare-up in Gaza or the return of the PA to Gaza and with it Abbas as a partner. It is possible that the Americans continuing to promote a diplomatic project will goad Netanyahu into torpedoing the reconciliation process to make it unlikely for diplomatic negotiations to be renewed. As Eizenkot made clear this week, however, such a spoke in the wheel could exact a very high price from Israel.