Who profits from Gaza unrest?

Israel is concerned that Hamas is planning a major strategic attack on the Israeli homefront, which would force the IDF to invade Gaza. 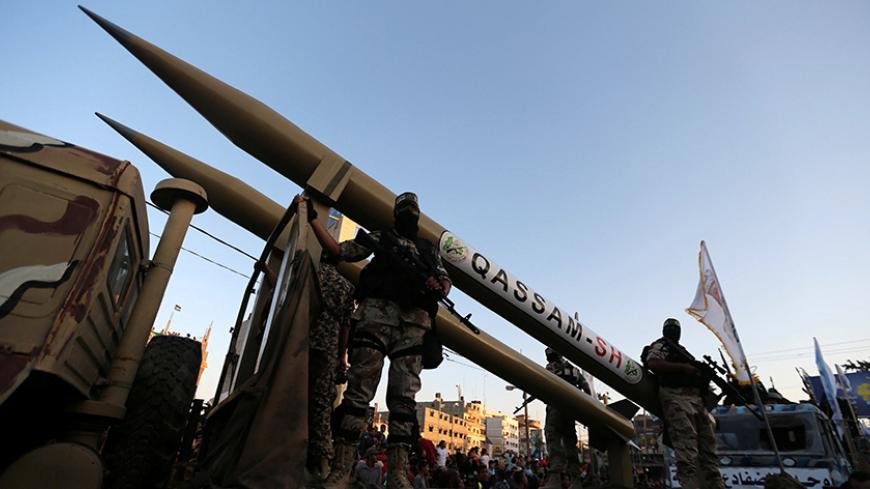 On Feb. 7, at least two members of the Israeli Cabinet announced that a new round of fighting between Israel and Hamas can be expected very soon, perhaps even as early as spring. The first was retired Maj. Gen. Yoav Galant (Kulanu), former commander of the Southern Command, who now serves as the minister of housing. The second was the chairman of HaBayit HaYehudi, Minister of Education Naftali Bennett.

These statements followed several large-scale attacks on Hamas targets, launched in response to a single rocket fired by a Salafi group, which landed in an open field in southern Israel on Feb. 6. While it is true that Israel has a "no containment" policy in response to every shot fired at it from Gaza, it seems as if Israel's aggressive responses have been taken up a notch ever since the appointment of current Defense Minister Avigdor Liberman, and they are now disproportional. Israel no longer makes do with sporadic fire at empty positions. It now collects a steep price from Hamas for every rocket that some ephemeral group or other manages to fire at it. These attacks are aimed at strategic targets such as tunnels, special weapons depots and various security infrastructures. However, the resulting paradox is that Salafi groups, which challenge the Hamas leadership, have found a way to cause Hamas harm. All they have to do is fire at Israel and wait for the outcome.

The Israeli approach is understandable. It is intended to prevent the renewal of the phenomenon of "dribbling," or in other words, steady but irregular rocket fire against Israel, which, for years, has introduced terror into the day-to-day lives of hundreds of thousands of Israelis living in the south. This time, however, it seems that these last developments are hiding other processes, strategic ones, which could lead the parties to yet another round of fighting, some three years after the end of the last round (Operation Protective Edge, 2014).

The underpinning of this equation is the dire state of the population in Gaza. A United Nations report concluded that Gaza will be unfit for human habitation by 2020. The electric power supply is completely disrupted, the water is very close to being declared undrinkable, unemployment is sky high and efforts at renovation and rehabilitation have been delayed. All of this has resulted in assessments by Israeli intelligence that Hamas could be compelled to take the same steps it took three years ago and attempt to break through this dead end by setting off a major explosion.

Unlike 2014, however, this new flare-up could be especially big. Israel has identified in Hamas, and particularly in its military wing, certain factors that it describes as "self-destructive." These people would consider an Israel Defense Forces (IDF) occupation of the entire Gaza Strip as a Palestinian achievement, claiming that it would trap Israel in the Gaza quagmire and cause it enormous strategic damage in the long run. Given this approach, Israel is concerned that Hamas is planning a major strategic attack on the Israeli homefront, which would force the IDF to invade Gaza, instigating the necessary explosion that would result in a strategic shift in the situation. It is a contemporary Gazan version of "And Samson said: Let me die with the Philistines" (Judges 16:30).

Several other factors should be added to this sensitive equation being formulated between Israel and the Gaza Strip. Hamas is worried that Israel is close to developing a strategic solution to the tunnels, which Hamas continues to dig vigorously. While it is not at all certain this is true, if that does happen, Israel will have denied Hamas the one military advantage that it currently enjoys. The fact that Israel has recently uncovered several Hamas tunnels has led the movement's military wing to worry that the barrier that Israel is currently constructing along the Gaza border will neutralize the military wing's ability to infiltrate Israel from underground. This concern could encourage Hamas to launch its "big operation" now, before this window of opportunity closes.

Furthermore, the parties are engaged in clandestine, indirect contact to come up with a formula that would allow for a prisoner exchange. Hamas holds the bodies of two Israeli soldiers, Lt. Hadar Goldin and 1st Sgt. Oron Shaul, as well as two civilians, who crossed to the Palestinian side of the border fence of their own initiative. Both these civilians apparently suffer from mental illness. For its part, Israel has arrested a large number of prisoners released in the Gilad Shalit deal in June 2014, who, according to intelligence assessments, reverted to terrorist activities. According to various reports, it also holds a mentally unstable family member of a senior Hamas official in Gaza.

The assessment is that Israel will agree that the prisoner exchange will include the easing of many significant but onerous economic restrictions on Gaza. Previous articles in Al-Monitor disclosed that the Israeli defense establishment supports greater easing of the closure. Defense Minister Liberman himself supports this initiative, which was first conceived in the offices of Chief of Staff Gadi Eizenkot. So far, it has been delayed by the Shin Bet, which considers such a move to be a high security risk, as well as by many powerful ministers in the government and Cabinet. Prime Minister Benjamin Netanyahu has yet to articulate a fully formulated position on the issue. It is believed that the prisoner exchange could open Israel up to thousands of Palestinian laborers. Maj. Gen. Yoav Mordechai, the coordinator of government activities in the territories, is the driving force behind these ideas. Some 30,000 Palestinian laborers now working in Israel could sustain about one-quarter of a million people in the Gaza Strip.

"Israel could withstand such a risk, which is intended to provide an income and sustenance to hundreds of thousands of people in the Gaza Strip and instill in them a sense of hope," one senior Israeli security official told Al-Monitor on condition of anonymity. "Our goal is to postpone the next round of violence for as long as possible. There can be no doubt that such a move would be a dominant factor in postponing the violence, as we are hoping to do."

There is no answer to the question of who will win in this race between the two competing vectors linking Israel and the Gaza Strip: the violent path, which will take this rivalry to yet another explosion by late this summer, or mollifying alleviation, which would ease the pressure on Gaza.

On Feb. 8, senior figures in the military wing of Hamas confirmed that Israel has sent them a new proposal for a hostage deal, but they also say that this proposal was rejected. What this shows is that contacts between Israel and Hamas stew slowly, sometimes over years. On the other hand, it is not at all clear that such a timeframe is possible, given the current circumstances. The question is whether the Israeli leadership has the energy to speed up the process, or whether it will be dominated by forces who would welcome another conflagration in the Gaza Strip, since this would shift the public agenda from a debate over government corruption and police investigations of the prime minister to one focused on security issues.