A recently published report on the 2014 Gaza war reveals that Israel failed to develop its own goals before launching the war and still has not developed a real strategy concerning the Gaza Strip. 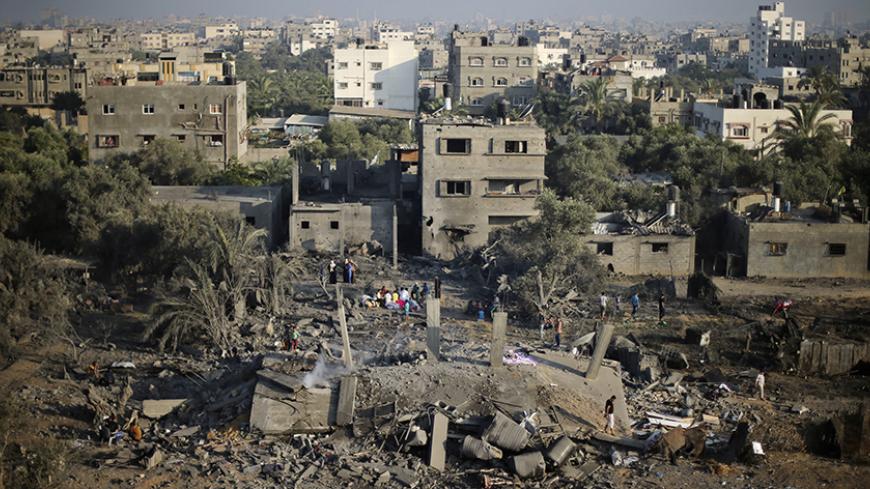 In a report released Feb. 28 on Operation Protective Edge, the state comptroller of Israel noted: "In a Cabinet discussion about the Palestinian arena that took place on April 3, 2013, … there was extensive coverage of the Judea and Samaria region and of Gaza. The prime minister noted that Gaza has become a real threat to the country. During that same discussion, Coordinator of Government Activities in the Territories [COGAT] head Maj. Gen. Eitan Dangot said, 'I want to point to a huge risk that will be coming from Gaza over the next two or three years. It involves infrastructure. … Gaza will face a water crisis with no solution in sight, which must be dealt with right now. … We will encounter a huge crisis there, which could result in an overall strategic change in our approach.'"

As a result of these remarks, Prime Minister Benjamin Netanyahu ordered the Cabinet to meet for a discussion about the worsening humanitarian situation in Gaza and its implications on the security situation and on Israel in general. That meeting was never held.

The state comptroller's report points to many other warnings coming from Dangot and the office of the COGAT and Maj. Gen. Yoav Mordechai, who replaced Dangot in January 2014. Both of them said that the situation in the Gaza Strip was like a bubbling pressure cooker about to explode. The bottom line is clear: If nothing is done, it will end in an explosion. Nevertheless, Israel continued to do nothing. There were no discussions. There were no alternatives. No one thought about the situation from a strategic perspective.

The comptroller quoted comments by former Mossad Director Tamir Pardo, delivered during a discussion that took place during Operation Protective Edge. He said on July 8, 2014, "The world has changed. The rules of the game have been reopened, and the agreements reached after Operation Pillar of Defense are inappropriate given the current circumstances." When asked by Education Minister Naftali Bennett what needed to be done, he responded, "I'm defining the problem for you. You define the objective. You are the political leadership, not me. You should be defining the objective."

The problem is that Israel's Cabinet never actually defined an objective. The state comptroller, Justice Joseph Shapira, proved as much with dozens more quotes from similar discussions.

Shapira's report has set off a tempest in Israel, and the reactions in Gaza were equally flabbergasted. The report covers the intelligence failure, the lack of readiness to respond to the threat posed by Hamas attack tunnels and various other fiascos, all of which it attributes to Israel's political and military leadership. Yet one particular issue towers above the others. According to the report, Israel has no strategy whatsoever in dealing with Gaza — or with its other fronts, for that matter. Israel marches forward without any idea what it wants to happen in Gaza. It has no strategic objectives, and as a result, it is not at all prepared for new developments and situations there.

Having reviewed the discussions in secret forums over the past few years and questioned officials of all ranks — including Netanyahu, then-Defense Minister Moshe Ya'alon and then-Chief of Staff Benny Gantz — Shapira paints a dismal picture. It shows how, in the summer of 2014, Israel sent its finest young men into a seething Gaza Strip without knowing what it wanted them to achieve there and without ensuring that its troops would be well-trained, well-equipped or well-learned in how to deal with the threat posed by the terrorist tunnels.

The report's findings reveal that Israel's security Cabinet barely existed at all, and that it never really examined various political and diplomatic alternatives in order to prevent the war. The writing was on the wall, in huge letters. It could be found in repeated warnings from the chief authority on the matter, COGAT, but Netanyahu and his Cabinet continued to ignore them.

Only after Operation Protective Edge erupted did Ya'alon say — on several different occasions, as quoted by the comptroller — that the war could have been prevented if Israel had come up with a timely response to the crisis in Gaza.

The report reveals how Israel and Hamas fell into Operation Protective Edge as if by happenstance, with no prior planning and no real desire to become embroiled in a conflict. The penny only dropped after the military operation ended, and only then did Israel became conscious of reality. Only then did Israel understand that whenever Hamas reaches a dead end in its efforts to create reasonable living conditions in Gaza and a modicum of hope for its residents, it will try to bust through it with the biggest blast possible, even if it is ultimately self-destructive.

While this situation is now crystal clear to the Israeli leadership, the situation has not changed. Netanyahu has yet to come up with a policy on how to handle Gaza and Hamas. He has not yet decided whether he wants the Hamas regime to continue ruling Gaza in the long term. There is no serious Israeli effort to improve living conditions in the Gaza Strip. Yes, there is a lot of talk, such as remarks by Defense Minister Avigdor Liberman, who said that if Hamas stops digging its tunnels and dealing in terrorism against Israel, Israel will agree to the construction of a seaport for Gaza, the gradual lifting of the closure and maybe even allowing laborers from Gaza to enter Israel for work. But there is very little activity.

Liberman and Chief of Staff Gadi Eizenkot share the inclination to allow tens of thousands of laborers from Gaza to leave the Gaza Strip for work in Israel, subject to security clearance. The problem is that this solution is not making any real progress on the ground. Hundreds of Gaza workers are already leaving Gaza daily to go to work in Israel, but as long as their numbers remain the same, any improvements in the Gaza Strip will be only cosmetic.

A September 2015 United Nations report assessed that as early as 2020, there will not be enough potable water in Gaza, while the state of infrastructure there will make it impossible for the population to have a reasonable existence. Indeed, nothing has changed since the 2014 war or the release of that UN report. Israel is marching headfirst toward the next round, the next conflagration and the next comptroller's report.