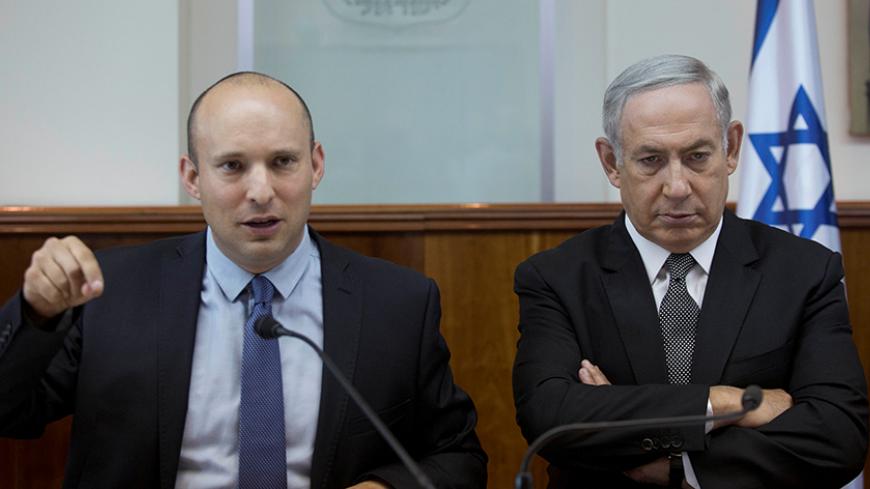 Education Minister and HaBayit HaYehudi Chair Naftali Bennett was in high spirits as he wandered the halls of the Knesset on Feb. 27. In fact, the members of his party noted that he seemed unusually pleased with himself. Just one day before the release of the state comptroller's report on the performance of the Security Cabinet and the military leadership during the 2014 Operation Protective Edge in Gaza (with much of the report’s content leaked to the press), Bennett could claim an enormous victory. Indeed, the report describes him as the only minister who demanded that Israel take action against the threat posed by Hamas’ tunnels.

An old rabbinic adage says, "He who works hard before the Sabbath will have what to eat on the Sabbath." It could easily refer to Bennett, who was a member of the Security Cabinet during the operation. Even as the fighting was underway, he made a point of branding himself as the campaign's political victor. He was the young minister who challenged the prime minister, the defense minister and the chief of staff, all of whom failed in their management of the fighting in Gaza.

Bennett showed an unprecedented level of sophistication by shifting the public discourse about the operation to the threat posed by the Hamas attack tunnels. As the report shows, not only did he convince the public, he even managed to convince the state comptroller himself that the most important way to assess Operation Protective Edge should be through that prism. Bennett operated like a well-oiled PR machine in the month preceding the report's release. Military and political pundits and senior media figures alike all received personal briefings from him. This prepared Bennett for the inevitable political fighting both preceding and following the report's Feb. 28 release.

Prime Minister Benjamin Netanyahu, Moshe Ya'alon, who was defense minister at the time of the fighting, and then-Chief of Staff Benny Gantz waged a media campaign of their own in an effort to undermine the state comptroller's findings, which were very critical of them. Meanwhile, Bennett made some last-minute adjustments to his own efforts. In the days before the report’s release, he briefed the members of his faction about its findings and recruited them to continue with his political and media campaign — a campaign designed to intensify as the report would be published. In closed-door party meetings, Bennett could finally show his Knesset colleagues that he was "providing them with the goods," as the head of a party with eyes on the prime minister's office. On the night before the report was published, Bennett shared his version of events again, this time at a meeting with party activists.

Bennett's new status as the political beneficiary of the criticism surrounding Operation Protective Edge bolsters his standing within his party and among the right at large. When confronting Netanyahu and Ya'alon, his two main rivals for the leadership of the right, he can now present himself as a security hawk who has a better understanding of the threats posed by the campaign in Gaza. Along the way, he is also firing off a warning shot at an emerging political threat by challenging the professionalism of Gantz, someone frequently mentioned as a candidate for Labor Party leadership.

The one person who tried, without much success, to shift the discussion about Operation Protective Edge away from the threat posed by the tunnels was former Justice Minister Tzipi Livni, who was also a member of the Cabinet at the time of the operation. As a former foreign minister, too, Livni is one of the most experienced politicians when it comes to serving as a Cabinet member during a military campaign. She was there for the Second Lebanon War in 2006 and for Operation Cast Lead in Gaza, 2008-2009. In a conversation with Al-Monitor on Feb. 27, Livni said that the most important conclusion to be derived from the way the Cabinet functioned during Operation Protective Edge is that Israel has no real policy regarding the Gaza Strip. That, she continued, should be the focus of discussion.

In a stinging rebuff of Bennett, she noted that "during Operation Protective Edge, the Cabinet was busy dealing with tactics, rather than with strategy." Livni said she tried spearheading an initiative that would successfully end the fighting and offer Israel achievements vis-a-vis Hamas. Her proposal called for the demilitarization of Gaza in exchange for its reconstruction and rehabilitation. The UN Security Council was prepared to accept her proposal, which would have given Israel license to take action against the tunnels and Hamas' rocket fire against Israel. Nevertheless, she claimed, the prime minister blocked it. Another politician who served during the operation as a senior Cabinet minister also told Al-Monitor that Livni sought to divert the internal wars in the Cabinet to the diplomatic field.

On Feb. 27 at the Knesset, Netanyahu received an especially warm reception from his faction’s members. He came out swinging at the state comptroller in what can only be described as a preemptive strike in the media before the report’s publication. In the report, the comptroller points a finger at Netanyahu for ignoring the tunnel threat and for failing to even hold a Cabinet discussion about it until the fighting commenced. "The truly important lessons” are not in the comptroller's report, Netanyahu noted. “We've delivered Hamas the hardest blow it has ever suffered. … We acted with force and responsibility and in full coordination between the political and military ranks."

Having resigned from his post as minister and Knesset member last year, Ya'alon has been waging for a while now his own battle from outside the Knesset's walls. He is fighting to preserve his good reputation, despite the report’s findings and Bennett's own version of events. According to Bennett, Ya'alon failed to instruct the Israel Defense Forces to come up with an operational plan to handle the tunnel threat, and he misestimated how ready Hamas really was to embark on a protracted campaign. Ya'alon responded with a disparaging attack on Bennett, claiming that Bennett tried to score political points during the operation, and that he continues to do so today. He even called Bennett the "Minister of Leaks."

By focusing on tactical issues, the report succeeded in turning a public discussion about the hostilities into a political battle. That is unfortunate.

The public received and continues to receive vast amounts of information, including conflicting versions of events and accounts of infighting in the media. What the report failed to provide is a focused discussion about serious issues, which is, in itself, a huge disservice to the families of the 73 soldiers and civilians who died during the operation. That is also why discussions surrounding the report are only accessible and meaningful to a very limited group of interested parties, those being the very people who pull the strings.

The political impact of the report is much more limited in scope than Bennett would like to believe. It contains no operative conclusions regarding Netanyahu, Ya'alon or Gantz. Furthermore, those three principals actually find themselves on the same side, rather than squabbling with each other, while Livni isn't attacking any of them from the opposition benches. In other words, the report will not have a corrosive effect, whether on the right or the left. In that sense, it is a sharp contrast to the Winograd Commission Report after the Second Lebanon War.