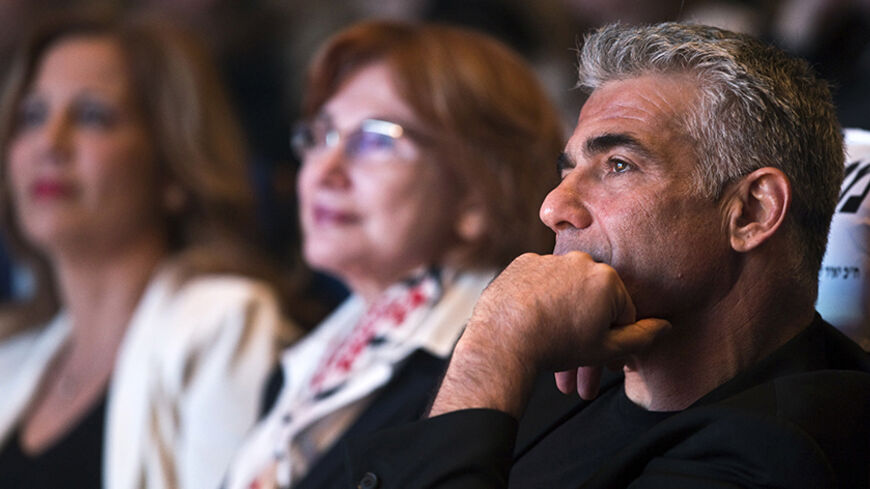 In the Feb. 20 season opener of “Eretz Nehederet,” Israel’s most popular satirical television program, the actor playing Yesh Atid Chairman Yair Lapid interrupts a political panel in the studio and asks, “What about me? You don’t have a character for me?” The host, Eyal Kitzis, responds that that is indeed the case, because Lapid hasn’t said anything significant in the past six months. Ouch.

Lapid, if one is to believe his advisers, laughed at the joke at his expense. Perhaps uncoincidentally, four days later Lapid interrupted his six-month drought of interviews to appear on “Ulpan Shishi,” the weekly news program on Channel 2. Lapid, whom polls predict to win the next election, has made rare and measured appearances in the media in recent months as part of his strategy to avoid making unforced errors and preserve the status quo. The price of such conduct, however, is the image of someone trying to curry favor among the general public at the expense of clear policies and meaningful positions.

Lapid has shunned statements or acts that could identify him with the left-wing camp as if it were an incurable disease while also trying to entice voters from the right-wing bloc, though so far without much success. Thus, he has naturally adopted the role of a stately official.

While Zionist Camp leader Isaac Herzog issued a harsh response following the Feb. 28 release of the state comptroller’s report on the 2014 Gaza war and called on Prime Minister Benjamin Netanyahu to hand in the keys, Lapid, who served on the Security Cabinet during the conflict, showed restraint in his response.

At a Yesh Atid meeting the day before the report's release, the party chair said, “Maybe it would surprise some of you, but I don’t think that the prime minister should resign because he made a mistake. Mistakes happen. Wars don’t take place in a laboratory. Security considerations are complicated.” He called for avoiding an “ugly political dispute” because “it concerns not politics but the lives of our soldiers.”

Lapid, for now the leader of an opposition party, could have easily chosen to make a sharper and far more scathing attack on Netanyahu given that the report pointed to grave failures by him in managing the war, in handling the threat of Hamas' tunnels and in concealing information from Security Cabinet members. When he wants, Lapid’s language can be harsh and biting, but at this moment he decided to look official and preserve Netanyahu’s dignity with precious Likud votes in the balance.

Lapid could have also taken shots at two future political threats — former Israel Defense Forces Chief of Staff Benny Gantz and former Defense Minister Moshe Ya’alon, both criticized in the report for their conduct during Operation Protective Edge. Like Netanyahu, they come off looking bad in the report, which attributes direct responsibility to them for the operation’s failures. Gantz's name has been floating around for a while as a potential candidate to head the Labor Party, and Ya’alon, hoping to establish a new party, is vying for a similar base of voters as Lapid. Of note, Lapid would have been happy to welcome the two of them into Yesh Atid as security experts, which his party lacks. Again, Lapid restrained himself, saying, among other things, “What the prime minister and his ministers should do tomorrow morning is not to shrug off responsibility, but to draw conclusions from the report. We owe it to the bereaved families, residents of the area surrounding Gaza, and IDF soldiers.”

As someone whose every response is shaped by research and public opinion surveys, Lapid dutifully adhered to his strategy of courtliness. His response to the report also did not include his plan for Israeli policy toward Gaza, although he spoke in 2014 about Gaza's rehabilitation and disarmament. With a top spot in the polls thanks to his leaning right, Lapid does not intend to ruin it for himself with statements that could sound conciliatory or leftist.

The comptroller’s report does not mention Lapid as being a “good student” who, unlike HaBayit HaYehudi Chair Naftali Bennett, asked the right questions and demanded answers. Lapid is one of the ministers who did not ask such questions, but looking back on those uninspiring times at the Cabinet, the leaks and the quarrels among ministers while battle raged in Gaza, one remembers that Lapid was not one of those dragged to populism. He actually maintained the dignity of the forum. His lack of security and diplomatic experience was notable then, but he was humble and self-aware enough to listen at discussions and not run to the television studio to reap political profit. At the same time, Bennett leveraged the Gaza operation for his needs, hitting at Netanyahu, Ya’alon and Gantz through briefings and leaks.

A day after the publication of the state comptroller's report, Lapid had already returned to the warm lap of stateliness after offering his measured response. He appeared at a Jewish People Policy Institute conference on March 1 and spoke at length about the uptick in anti-Semitism and the fight against it. “The days in which the Jewish people hid from anti-Semitism are over,” Lapid said. “[Jews] won’t hide anymore, Jews won’t be scared anymore, and we expect the governments of the world to fight anti-Semitism decisively and with all their might.”

Since the last election, the Yesh Atid chairman has been grooming himself for the premiership. He is trying to make up for his lack of security and diplomatic experience through in-depth study of Israeli strategic issues. Last September, he published a long, comprehensive essay in the magazine of the Institute for Security Studies on Israel’s security understanding. In “The Prime Minister and 'Smart Power,'” Lapid laid out an analysis of the components of Israeli power. He discussed the weaknesses of the Security Cabinet during Operation Protective Edge and Israel’s embarking on war without defining the desired outcome or having an exit strategy or time frame. This is a correct and important conclusion regarding the events of summer 2014 that reveals a much broader understanding than Bennett’s narrow view. Bennett also carries himself as a candidate for prime minister, but he sees the war in Gaza solely through the mouth of a tunnel.