Yair Lapid is already preparing for the day after the elections by campaigning against the ultra-Orthodox in a sign that he may quit the Blue and White Party if it loses. 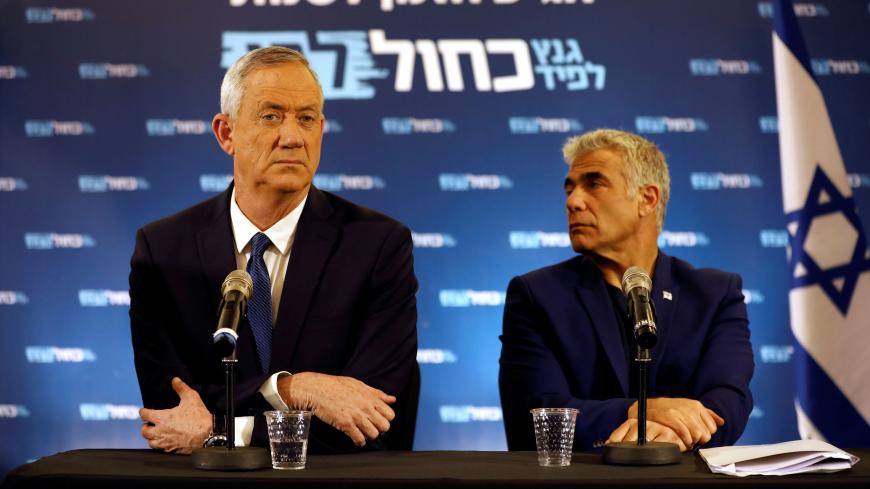 “Of course I’m not taking the video back. It was an attempt at humor, and it’s very funny,” Knesset member Yair Lapid told Army Radio on the morning of Aug. 6. The number-two man in the Blue and White Party was sticking to the campaign he has been running ever since the current electoral race began, but his brash, often scathing attacks on the ultra-Orthodox run counter to Blue and White's strategy, especially that of its leader, Knesset member Benny Gantz.

The video takes Lapid’s campaign against the ultra-Orthodox up a notch. In it, he imagines a WhatsApp group run by Prime Minister Benjamin Netanyahu during a discussion with his ultra-Orthodox partners. The text depicts them as greedy extortionists, using the prime minister’s political weakness to their advantage. “Want us to sign? Give us a trillion shekels for the yeshivas,” wrote "Deri Hadash," a stand-in character for Shas chairman Aryeh Deri.

The video caused an immediate commotion. The ultra-Orthodox claimed it was anti-Semitic and called on Gantz to disavow it. “Benny Gantz needs to send him flying,” said ultra-Orthodox Knesset member Moshe Gafni.

The leadership of the Blue and White Party did distance itself from Lapid. Knesset member Moshe Ya’alon, who is number three on the party's list, told Army Radio, “He blurted something out, and we will need to clarify what it was among ourselves.” Gantz also distanced himself from the video and Lapid in a tweet in the spirit of Tisha Be’Av, the Jewish day of mourning that begins Aug. 10. “In these days during which we remember that the destruction of the Temple resulted from unjustified hatred, we must adopt a style different from that of Netanyahu and embrace unconditional love.”

Gantz has been very active in ultra-Orthodox circles over the past few weeks, courting the rabbis and indicating that he wants to cooperate with them in his future government. Then he was dealt a devastating blow from the number-two person on his party’s list. The question asked repeatedly since the video's release is whether Lapid had surprised Gantz or if they had coordinated to run two complementary campaigns so as to appeal to the widest possible audiences, both unofficial versions of the story from Blue and White insiders.

Ya’alon claims that Lapid acted independently. The second version goes that it was all coordinated in advance as part of an effort to depict Gantz as being more inclusive than Lapid. “Gantz supposedly scolded Lapid,” a senior Blue and White member told Al-Monitor on condition of anonymity. “It was intended to show the ultra-Orthodox that he is on their side."

Blue and White tried to show that its members are working together in harmony. All four members of the Blue and White leadership — Gantz, Lapid, Ya’alon and Gabi Ashkenazi — appeared together at an election event, smiling and showing a unified front the day before Lapid's video emerged. Pictures from the event featured prominently on Gantz’ Twitter account. Nevertheless, the smiles could not hide the tension among the Blue and White leadership and an ever-growing series of hints that another electoral loss will end the partnership.

The ad hoc list was formed just shortly before the deadline for submitting parties for the April 9 election. At the time, the promising merger of three separate parties was a powerful political force, bolstered by the last-minute addition of Gabi Ashkenazi. Now, however, it's struggling under the weight of structural problems, clashing egos and intensifying infighting.

Lapid apparently has no plans to give up his dream of one day becoming prime minister of Israel, and this is the key to understanding the strife in the Blue and White Party. The party consists of two factions: The first revolves around Lapid, chairman of an established party (Yesh Atid) with tens of thousands of activists across the country. The other faction consists of the former generals.

Lapid has been keeping a close eye on his voter base, the people who rallied to his side early on and joined the anti-ultra-Orthodox campaign he led in 2013. Lapid now sees many of them abandoning him for the welcoming arms of Avigdor Liberman, the chairman of Yisrael Beiteinu who has become the fresh new force fighting against the ultra-Orthodox in Israeli politics. Liberman has fewer inhibitions, while Lapid remains constrained by a very staid campaign. The more Gantz courts the ultra-Orthodox parties, the more Lapid suffers. Lapid’s greatest nightmare is that the party he worked so hard to build will disintegrate, leaving him little more than a statistic in Gantz’ show.

Lapid has claimed as recently as the eve of the last election that there are only two people in Israel who know how to run a good campaign: Netanyahu and himself. The three former chiefs of staff who make up the party leadership with him speak a very different language. They do not appreciate Lapid’s leadership or skill set, at least behind closed doors. The most outspoken among them is Ya’alon, who accused Lapid of hurting the party in remarks that were recorded and leaked to the press. Lapid has been forced to refute the accusation to protect his rotation agreement with Gantz.

Lapid believes that he knows much more about politics than the generals. He has a long-term vision. He reads the polls carefully and he is preparing for the day after the election, including the possibility that the Blue and White Party will not form the next government. In the event that Blue and White does split, it is widely believed that Lapid will go back to operating independently with Yesh Atid while he builds himself up as a potential candidate for prime minister.

Even if the two strategies were coordinated, it is unclear how the combination would serve the interests of the Blue and White Party. A single, unified message is an important part of any election campaign, while two separate campaigns are a strategic mistake. The one lucky break for Blue and White is that the two parties to its left — Labor-Gesher and the Democratic Camp — are lagging far behind it in the polls. This alone is incentive enough for its leaders to remain united.