Israel’s Lapid back in race to lead Israel

Now that the Blue and White alliance has been dismantled, Yair Lapid is free to pursue his old dream of premiership. 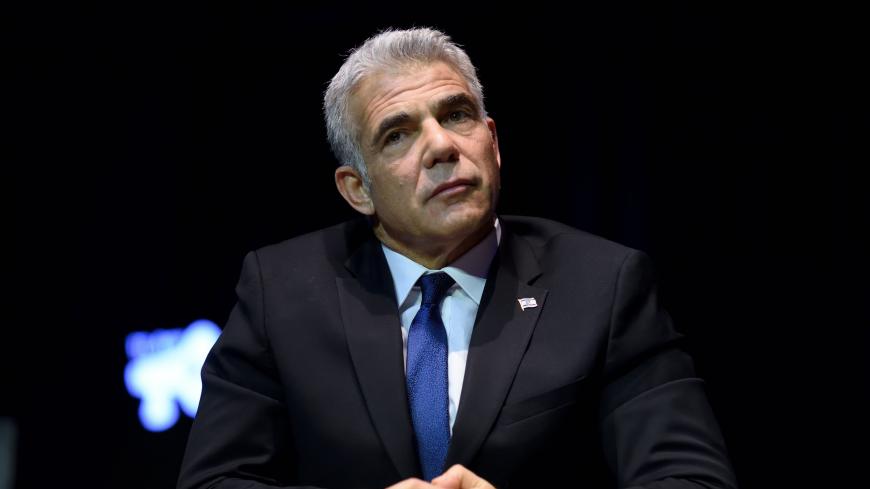 The rapid dismantling of the Blue and White party last week was intended to relaunch the political brand “Yair Lapid.’’ In fact, even before the original Blue and White party gave up the ghost, Lapid was quick to launch an aggressive campaign against his former partners. His Twitter account fired off a rapid series of opposition tweets about Blue and White leader Benny Gantz, saying things like “Benny Gantz surrendered without a fight and went crawling into the government.” Ever since then, he has continued firing off tweets along those same lines. The more time passes, the clearer it seems that Lapid was eager to put an end to his partnership with Gantz and win back his independence.

The chairman of Yesh Atid (one of the three partners within the Blue and White alliance) is one of Israel’s most focused and diligent politicians, carefully planning his every move. And so, his most recent moves were all part of a larger master plan. He was ready for the impending explosion in the Blue and White “cockpit” (leadership) and contributed in a significant way to its dismantling. Since the breakup, it actually seems as if he has returned to his natural element and is enjoying every minute of his old new life.

In the past few months, Lapid served as No. 2 in the Blue and White party. It wasn’t easy for him to give up his position as leader of a party. When the Blue and White party was formed, he insisted on and received a rotation agreement with Gantz over who would be prime minister had the party won the April 2019 elections. He insisted on it in the second round of elections in September 2019 as well. Then, in the third round of elections, he succumbed to just criticism, abandoned the rotation, and was praised for being pragmatic and mature.

The problem was in the day-to-day dynamics of Lapid’s relationship with Gantz. He was unable to give Gantz the space he needed to maneuver and run Blue and White, and ended up working behind his back. This could be seen in the way that he collaborated with Chairman of Yisrael Beitenu Avigdor Liberman in an attempt to take over the Knesset by cooperating with the Arab Joint List. Gantz was not at all happy about it, but he was pushed into a corner and decided to toe the line. He realized that Lapid was determined to prevent a unity government under any circumstances, no matter what the cost. Then the coronavirus began spreading in Israel and around the world, and Gantz began paving a new path forward, which eventually ended his partnership with Lapid. In the end, both parties wanted this divorce.

From the moment the party was dismantled, Lapid seemed liberated. He regained control and was eager to start a new life in politics. Now, he is once again the sole leader of a party formed in his image. He returned to his comfort zone in an attempt to build himself up as an alternative to the current government. It sounded promising, at least on paper. After all, he was the only one to stick to his election promise by refusing to sit in a Netanyahu government.

Given the reality of Israeli politics, however, the chances of Lapid now forming a government are negligible. First of all, his ability to win the support of a large voter base from the political center is limited, especially after he attempted to form a government with the support of the Arab Joint List. And he returned with zeal to his original, anti-ultra-Orthodox agenda. The problem is that this makes him the leader of a sectoral party, not a governing party.

In fact, the first polls conducted after the Blue and White breakup do not bode well for Yair Lapid. A poll conducted by the Smith Research Institute, which was released on April 2, found that Yesh Atid (together with Moshe Ya’alon’s Telem party) would return to its original size, before the creation of the Blue and White party. According to that poll, Lapid and Ya’alon would win just nine seats, compared to Gantz, the chairman of the Blue and White party (after the split), which would win 20 seats, even though Gantz broke his promise never to sit in a government headed by Benjamin Netanyahu. The same poll showed that Netanyahu, as head of the Likud, would break another record, winning 41 seats. His indictment for fraud and impending trial, which is expected to begin in May, do nothing to reduce his popularity. In fact, they have the opposite result.

The conclusion from this is that while Lapid may have kept his promise and given up the comforts of government, his move did not give him the backwind he wanted. In contrast, Gantz may have come under scathing criticism for joining forces with Netanyahu, but he did not crash. What this shows is that when it comes to Netanyahu, the majority of voters in the political center don't react too harshly against the prime minister.

Lapid founded the Yesh Atid party in late 2012 and came to see it as his life’s work. In 2013, he won a remarkable 19 seats, about five of which came from the soft right. He offered a fresh new perspective on politics, serving as a home to young voters who wanted to implement social and economic change, but also to people with a clear, anti-ultra-Orthodox agenda, who demanded that the ultra-Orthodox serve in the military. They all felt that Lapid offered them an authentic voice. His time as finance minister in Netanyahu’s third government was brief and unsuccessful. His firing led to a new election, which resulted in him losing much of his support. He ended his campaign with just 11 seats. Ever since then, he has been trying to build himself up as a viable opposition. He has even tried to reconcile with the ultra-Orthodox based on the realization that he cannot compete for the position of prime minister without them.

Lapid was never able to win back the seats he lost, but he continued to enjoy the support of his hardcore voter base. They represented a well-to-do, secular, anti-ultra-Orthodox population. When Gantz formed his new party, Israeli Resilience, in late 2018, Lapid found himself in a genuinely subordinate position and dropped in the polls. He started out believing that Gantz would agree to serve as his No. 2 man. Then he realized that there was no chance of that happening, so he joined forces with Gantz and gave him the senior position. To his credit, it must be said that he showed pragmatism and flexibility, even if it came at the expense of his independence and his status as the sole authority in his party.

Now Lapid is on his way to becoming the leader of the opposition, a role he has already been filling energetically for the last week. He will be there to pummel the Netanyahu-Gantz government, track their every move and wait just behind the corner to celebrate the start of Netanyahu’s trial. But one big question remains: Where will all of this lead him?

Political developments, demographic divisions and the recent electoral shifts do not bode well for him. At the start of his political career, Lapid wanted to brand himself as the leader of a center-right party. He has since wandered to the left, most notably by breaking his promise never to form a government with the support of the Joint List. This lost him a broad pool of voters. What Lapid is about to discover is that his life’s work, Yesh Atid, actually has a limited base of support. On the other hand, his contribution as head of an effective opposition will be important to maintaining a democratic balance in the face of the Netanyahu-Gantz government.