Yesh Atid leader and opposition chair Yair Lapid fails to leverage his energy and gain momentum, even as Prime Minister Benjamin Netanyahu is highly criticized over his handling of the coronavirus pandemic. 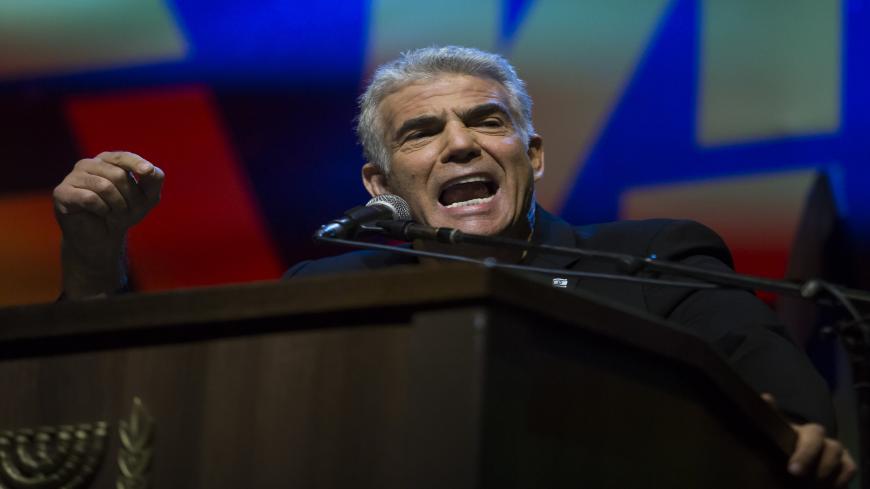 When the Blue and White party had a noisy breakup last March, it looked like the party’s No. 2 candidate — Yair Lapid — finally had his chance to offer an alternative to Benjamin Netanyahu in the prime minister’s office. Six months later, Lapid might have missed his chance.

The third election round in a row on March 2 did not produce a clear winner. Lapid led the party’s aggressive line against joining a Netanyahu government. But the coronavirus pandemic reshuffled the deck. Blue and White Chairman Benny Gantz decided that it was in the country’s best interests for him to join an emergency government headed by Netanyahu. Lapid refused to join and the party split, after almost replacing Netanyahu in power. With the collapse of Blue and White, hundreds of thousands of Israelis saw their hopes for a different future dashed.

More so, this rift was the cause of enormous disappointment among the center-left. Throughout it all, Lapid seemed to be a man of principles, especially when compared to former Chief of Staff Benny Gantz. It was Gantz who broke his election promise by entering the new coalition, even though the prime minister was under indictment for bribery.

After the split, Lapid returned to his old position as head of the Yesh Atid party, one of the partners in Blue and White. When the new government was formed in May, he also became head of the opposition, another powerful government position and an ideal launching pad for anyone seeking to become prime minister.

Gantz began crashing in the polls, while Lapid started gaining momentum. Many even saw him as the best alternative to Netanyahu. The stars seemed to be in alignment, so that, at just 56 years old, it looked as if Lapid was about to walk away from the political crisis as its big winner. That’s when things started going wrong.

Five months after assuming the new role of chairman of the opposition, Lapid hasn’t been able to lift himself up, even though he meets all the conditions to become the leading candidate for prime minister. The health and economic crises are only getting worse, while the Netanyahu-Gantz coalition is barely functioning at all. In fact, the government is wallowing in endless squabbles between the Likud and Blue and White over conflicting agendas and egos. Meanwhile, Gantz is still crashing in the polls, with many pollsters predicting that the number of seats his party would win in a new election would number in the single digits. And then there is Netanyahu himself. He is all tangled up with his bribery trial. In addition, the normalization agreement with the United Arab Emirates is not proving to be the electoral draw Netanyahu had expected, and the protests against him are getting even more militant.

The problem is that Lapid hasn’t been able to turn this energy into real political strength. Instead, the rising star on the horizon is Yamina Chairman Naftali Bennett. He may now head a minor party with just six seats, but polls predict that he will win 20 seats or more in the next election.

Bennett is now the most effective opposition to Netanyahu from the right. He attacks the government mercilessly, while presenting his own plans to stop the coronavirus from spreading. Voters disappointed with Netanyahu and Gantz have found a political home with him, rather than with Lapid.

It turns out that Lapid has a glass ceiling of his own, which he hasn’t been able to break. He is an outstanding speaker and a sharp and determined campaigner. He has ambition, motivation and killer instincts. Nevertheless, people don’t see him as a good fit for the job of prime minister.

The first person to identify Lapid’s weakness in the opposition was, of course, Netanyahu. He realized that the best thing that could happen to him would be to have the chairman of Yesh Atid as his main rival in the next race for the prime minister’s office. This explains why he began attacking Lapid directly.

That’s what happened Aug. 12, when the Knesset debated a new law proposed by Yesh Atid, which would prohibit anyone indicted for a crime to form a new government. In fact, the law was intended to stop Netanyahu if he called a new election. The proposal did not pass, but Netanyahu took advantage of it to lash out at Lapid from the Knesset dais, while targeting his weak points. He pointed out that Lapid has no formal education, and that he heads a party without any internal democratic mechanisms. He then turned to Lapid and said, “Everything is fake with you. You are constantly pretending. Without a matriculation certificate and without a bachelor’s degree you tried to get a fake doctoral degree. Lapid, you are a fake democrat." Netanyahu said that Lapid wrote himself the chart of his Yesh Atid party, placing at its leadership people whom he alone selected.

Lapid played right into Netanyahu’s hands, with aggressive speeches and statements of his own. On Sept. 11, for instance, he tweeted, "People have nothing to eat. There is no limit to the detachment and obtuseness of this man.”

Although he was congratulated for taking a firm stand against the prime minister, this fight did not benefit Lapid in the least. In contrast, Netanyahu got exactly what he wanted. He laid the groundwork for a campaign between the two of them, while emphasizing his own advantages. Over time, it is becoming clear that Netanyahu’s real rival is not Lapid but Bennett, who continues getting strong and gets high marks as a suitable candidate to serve as prime minister, leaving Lapid trailing him from behind.

As if that was not enough, the No. 2 man in Yesh Atid — Ofer Shelah — who has been Lapid’s friend for the last 30 years, has challenged his leadership and demanded that he hold primaries for the party’s leadership. Lapid was surprised and hurt by this. Having founded the party in 2012 and dominating it since, he responded curtly that he has no plans to succumb to any ultimatum. But Shelah did not fold. He explained to the press that Lapid hasn’t been able “to provide the goods,” and that he has no chance of beating Netanyahu.

It came as a devastating blow to Lapid. He and Shelah haven’t been in contact since then, and it is not at all clear how they will continue to serve together in the same party. What is certain, however, is that Shelah’s remarks against Lapid will figure prominently in the Likud’s next election campaign.

Still, Lapid is not one to give up. When he entered politics after a long and brilliant career in the media as a journalist and TV personality, he promised that he would not have any new career after this. In the early days, he skyrocketed. He emerged from his first election in 2013 as head of the second-largest party in the Knesset. While Lapid has never been able to repeat that remarkable success, he became a stable political player and the sole leader of a centrist party with a hard core of supporters. Now that the next round of elections could be moved up to March 2021, Lapid is facing a critical moment in his career. Will he surprise everyone by translating public disappointment with the handling of the coronavirus outbreak and Netanyahu’s trial into a political force that actually brings Netanyahu down, or will he continue to be the personification of an unfulfilled promise?