With the state budget approved, Foreign Minister Yair Lapid is now preparing for the moment when he takes over premiership from his coalition partner Naftali Bennett. 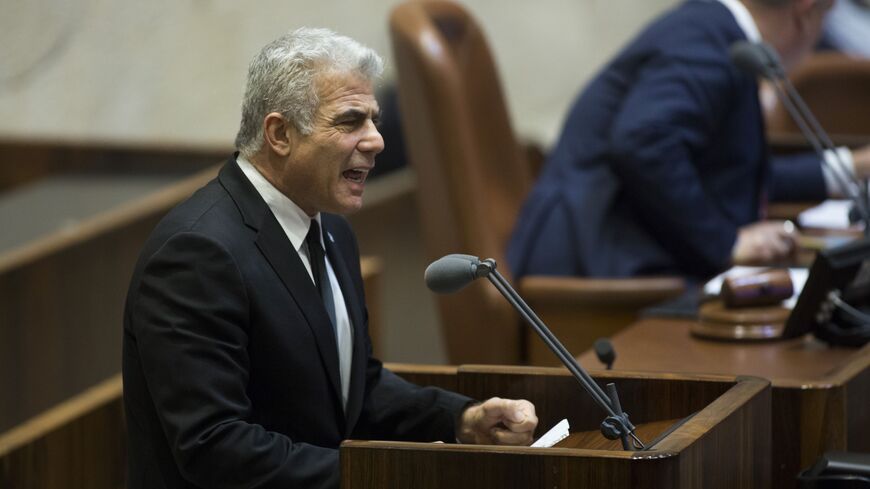 Yair Lapid, leader of Yesh Atid Party, speaks during a discussion to vote on the dissolution of the Israeli Parliament in the Knesset on Dec. 26, 2018 in Jerusalem. - Lior Mizrahi/Getty Images

Foreign Minister Yair Lapid is a busy man. Last night for instance, he met in Jerusalem with the US envoy to the UN, Linda Thomas-Greenfield, and then spoke on the phone with the new Canadian Foreign Minister Melanie Joly. In both meetings he spoke not just about bilateral relations and cooperation, but also about Israel’s strategic interests. Lapid’s associates say he is perfectly at ease in his current position of Israel’s No. 1 statesperson and diplomat.

Lapid entered politics in 2012, for what became over the years a rather bumpy road. In March 2020, after a third consecutive round of elections, his political partner and head of Blue and White party, Benny Gantz, decided to establish a government with then-Prime Minister Benjamin Netanyahu. Lapid, No. 2 in Blue and White, broke up the alliance, going back to heading his original Yesh Atid party.

Gantz explained he was joining the Netanyahu government to resolve the COVID-19 crisis. Lapid decided to stick with the agenda of putting an end to the Netanyahu regime. In other words, he remained in the opposition. At the time, this was viewed as political suicide.

Even the party founded by Yesh Atid began to doubt Lapid’s political acumen. Some party members even criticized him publicly. Lapid’s former friend and partner, Knesset member Ofer Shelah, asked that primaries be held for the heads of the party, claiming that Lapid had no chance at all in the elections.

This was one of the harshest blows that Lapid received in the course of his political career, but he easily halted the mutiny. Shelach was sent home, only to see Lapid taking off once again.

The coalition agreement between Prime Minister Naftali Bennett and Lapid stipulates that Lapid will take over premiership after two years. And so, barring major, unforeseen changes, Lapid will enter the Prime Minister’s chambers in around a year and a half.

The passage of the state budget on Nov. 4 brought Lapid even closer to the elevated position he coveted ever since he abandoned a splendid television career to enter politics. If the budget had failed, the so-called Change Government would have fallen apart together with the rotation agreement. But now, under almost all circumstances, Lapid will become the State of Israel’s next prime minister.

In political terms, we could say that Bennett’s time started running out from the moment the budget was approved. The rotation agreement stipulates that under the unlikely scenario that the coalition does fall apart before the two men change places, Lapid will automatically enter the Prime Minister's Office and serve in the interim period before new elections are held. This would be a real political prize: to run an election campaign while serving as prime minister, with all the power that involves.

Facing Bennett and Lapid is Netanyahu, who does not seem ready to retire. He continues to hold the title of Chairman of the Opposition, while simultaneously running his legal case, and acts as if he’ll be returning to the prime minister’s residence on Balfour Street any day now. According to Netanyahu’s strategy, the next elections will be between him and Lapid: head-to-head for the first time.

Lapid's low public opinion ratings had been his weak point, and it was the reason why he agreed in the first place to accept Gantz as the head of the new party they established together. As former Chief of Staff, Gantz was viewed by the public as a better candidate.

But in recent months, ever since the Bennett government was founded, Lapid’s standing has changed, and with it his demeanor. He is gaining experience and starting to close the gaps between himself and Netanyahu. As abovementioned, it is Lapid who conducts Israel’s foreign policy, travels around the world, hosts ambassadors and heads of state. His political behavior is almost flawless.

Thus, when Netanyahu looks into the future, he sees the current, up-to-date version of Lapid and understands that he is no immature lightweight anymore. Instead, he sees a politician who heads Israel’s second-largest party who has accumulated experience, popularity, and sophistication.

Under these circumstances, Bennett and current Minister of Justice Gideon Sa'ar — both right-wingers who competed for the premiership — have become a secondary threat. Both of them have seen their own poll numbers drop in recent weeks.

And those numbers seem unlikely to rebound once Lapid enters the prime minister’s chambers. The reason? Because both politicians will serve under a prime minister viewed as left-wing/center, despite their electoral promises to the contrary. Even the “soft right” will find it hard to swallow such a composition.

Netanyahu is also aware of the growing weakness of both Bennett and Sa'ar. Speaking in the Knesset on Nov. 8, Netanyahu said, “The world’s leaders don’t count Bennett because they also know that he’s just a puppet president, who won’t pass the electoral threshold. Bennett’s only role is to realize the dream of the left, and let Lapid be prime minister.”

Still, as far as Netanyahu is concerned, these two are becoming secondary targets. His campaign against the government has now two goals. The first is to prove to the right that Bennett and Sa'ar are handing over the keys of the state to a “left winger” whom they themselves have publicly branded as such. It was not long ago that Sa'ar said that to join a government run by Lapid is like one run by Peter Pan.

The second goal is undermining Lapid, who will probably be Netanyahu's main rival in the next elections. Lapid will run for office with the status of prime minister, against Netanyahu, the chairman of the opposition who is (and could still be) entangled in criminal proceedings. Former Likud Minister Dudi Amsalem, a close associate of Netanyahu, called Lapid “a radioactive poison factory.”

Lapid’s task now is to prove that he is, indeed, fit for the premiership. However, even if he doesn't win the next election, he has attained the status of head of Israel’s Left-Center political camp, and no external candidate is expected to overturn him.