Is Israeli Foreign Minister Lapid's Yesh Atid a party of one?

Yesh Atid, which is the second-largest party in Israel, has been ruled since its inception by one person alone — Foreign Minister Yair Lapid. 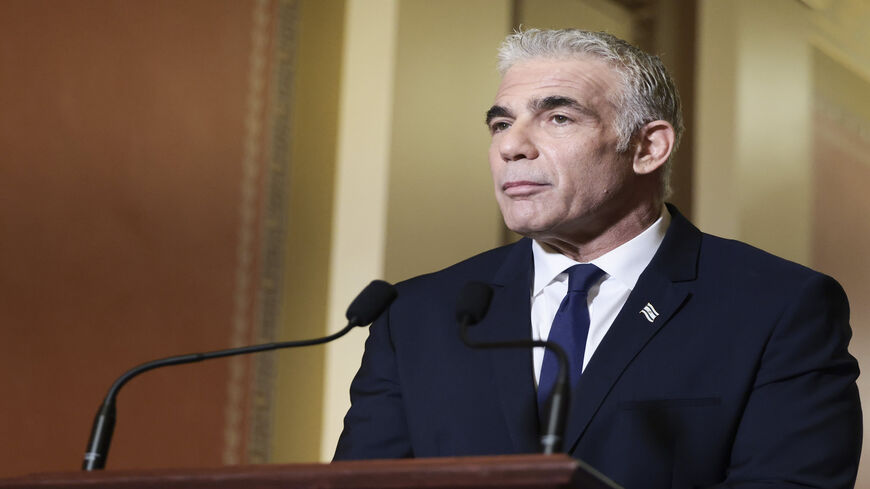 Lapid has headed Yesh Atid since he first founded the party almost 10 years ago, in early 2012. In that time, he has been the sole power in the party, personally appointing people to every position in the party apparatus and even selecting which members would run on the party’s Knesset list. Once they were elected, he decided on which committees they would serve. In some cases, he decided between elections to remove certain Knesset members from the party list (often because they rubbed him the wrong way). When the coalition was formed half a year ago, it was Lapid, of course, who decided which members would be appointed ministers and which ministries they would occupy.

Given all of this, his announcement that there would be a primary to decide who would head the second-largest party in the Knesset was met with skepticism and cynicism by the media and, of course, the broader political system. It was too early to forget the circumstances that led to Lapid’s No. 2 person in the party, former Knesset member Ofer Shelah, to end his political career less than a year ago. He not only demanded that Lapid hold a primary for the party’s leadership, he did this publicly, in interviews with the press.

Lapid not only rejected the idea unequivocally, he also cut all ties with Shelah, even though Shelah was thought for years to be the person closest to Lapid, and to have been his closest confidant ever since the party was first founded. Shelah’s abrupt departure from Yesh Atid offered a glimpse into the inner workings of the party and placed Lapid under scrutiny and criticism.

This is the background for Lapid’s surprising decision to hold a party primary. It was intended, first and foremost, to eliminate criticism of Lapid, who claims to represent and speak out on behalf of liberal values and freedom. As the recent developments show, he is, in fact, the leader of an undemocratic party. And yet, no one expected the Yesh Atid primary to result in any big drama.

On Dec. 20, the party released an official statement that the deadline to submit candidacies for the party leadership had passed. Since Lapid was the only person to submit his candidacy, the primaries, scheduled for January 2022, were canceled and Lapid’s tenure as party leader was renewed. Inevitably, the statement was met with laughter and ridicule.

The Likud immediately took advantage of this opportunity to mock its rival Yesh Atid and especially its leader. The party’s official Twitter account reported, “Live from Yesh Atid campaign headquarters,” along with a video of North Korea’s supreme leader Kim Jong Il being cheered by his masses of party acolytes.

But beyond the humor and the barbs, this bizarre development involving Lapid offers a perfect chance to glimpse the inner workings of the party he dominates. That is important, considering that if the rotation agreement takes place as planned, Lapid will become the next prime minister of Israel in August 2023. Once that happens, he will not only be the most powerful person in his party but in the entire country. It will be the first time that Yesh Atid — often considered Lapid’s “baby” — will become the ruling party, and it will be the first time that Israel’s leader will be someone not subjected to party criticism or scrutiny.

In that sense, this is not just some internal party issue. It is a major public political issue in the widest sense of the term. As mentioned, none of Yesh Atid’s 17 Knesset members, several ministers and deputy ministers were chosen in anything like a democratic process. They all depend on the whims and will of Lapid, which explains why the party is so obedient to him.

The problem doesn’t stop there either. Lapid is not the only Israeli politician who formed his own party and became its sole decision-maker. In fact, the phenomenon has become even more widespread over the last few years, harming the very essence of Israel’s democratic party system.

The current coalition offers a good example of the breadth and depth of the phenomenon. The government is headed by Naftali Bennett, head of the Yamina party, which he founded just a few years ago. He decided who would be included on its Knesset list, personally appointed its ministers and other people in positions of power, and he controls the entire party apparatus.

The same is true of Finance Minister Avigdor Liberman, who heads the Yisrael Beitenu party that he founded in 1999. He has ruled over the party high-handedly since then, with no one to challenge his authority. He picks who gets on its Knesset list, replacing some of them between every election. What this does is foster a natural sense of dependence on Liberman among the party’s Knesset representatives. Over the years, anyone who was too independent-minded was removed from the party list at the very first opportunity. That is what happened to Danny Ayalon, who served as a prominent deputy foreign minister after the 2009 election. A former ambassador to Washington, Ayalon was removed from the party list just a few years later in a curt phone call that left him reeling. Apparently, unlike Lapid, Liberman is impervious to criticism. He never once considered holding primaries for his Yisrael Beitenu party, even as a gimmick.

Another one-person party in the coalition is the New Hope party headed by Justice Minister Gideon Saar. He formed his party right before the last election, following a bitter split with the Likud after losing to Netanyahu in a primary (of all things) for the party leadership. Here, too, the mechanics behind the party are similar: A politician forms a new party, leads it and dominates its internal institution with the help of a party constitution that prevents anyone from replacing him. Saar also picked the party members to populate his Knesset list and decided which of them would be promoted to minister on behalf of the New Hope party.

Likewise, the Blue and White party, headed by Defense Minister Benny Gantz, is a one-person party, built around the same concept: Gantz picks the party’s Knesset members, appoints its ministers and dominates the party’s internal apparatus.

In fact, there are just two parties in the current coalition that have democratic systems of governance: Labor and Meretz.

In the opposition, the Likud, the Arab Joint List and the Religious Zionist party all have some kind of democratic governance or other.

While the one-person party is a familiar phenomenon in Israeli politics, it was never widespread. Parties like these popped up every so often, only to collapse and disappear when their leader lost popularity. The issue is that it is becoming a convenient method for politicians with a certain public appeal to obtain the political power they covet. Over time, this could well change the character of Israel’s parliamentary system: The Knesset could soon be made up of members who cannot act independently, because they were appointed by a single individual, rather than being elected by the people they claim to represent.