Two heads pull Israel’s Blue and White in opposite directions

Unlike Blue and White leader Benny Gantz, his colleague Yair Lapid has no intention of keeping low profile. 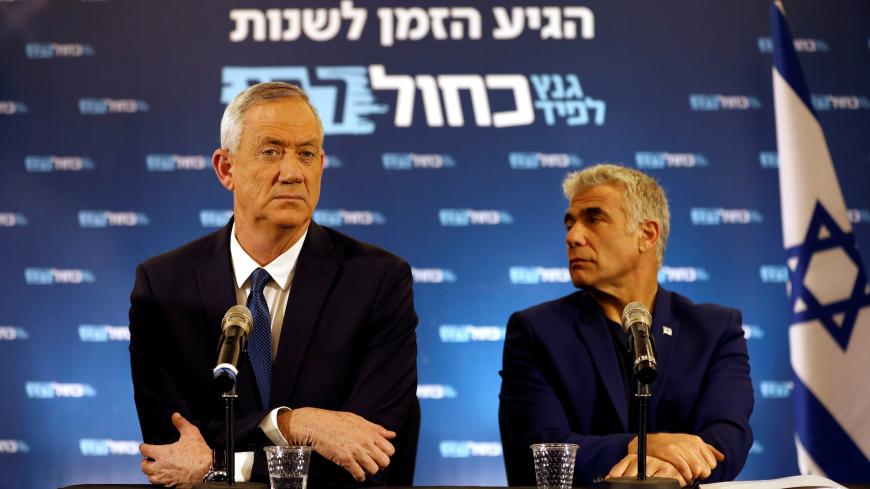 When Blue and White Party chairman Benny Gantz completed his first address to the Knesset May 13, the first person to jump up and rush to the podium to congratulate him was number two on his list, Knesset member Yair Lapid. It was hard to miss Lapid’s gesture, which included a warm hug followed by a pat on the back. He looked like a teacher glowing with pride after his student passed his rhetoric exam with flying colors. From the sidelines, at least, it looked like the two men had a cordial relationship. The same was true of a photo Gantz posted to Twitter shortly before his speech. It showed him and Lapid sitting together, smiling and acting like old buddies. “The Knesset in action,” Gantz wrote in the caption.

Blue and White was established before the April 9 election. Lapid’s Yesh Atid partnered with Gantz’ new Israel Resilience Party, a union that won them 35 Knesset seats. But will the strong pre-election partnership survive? The problem is that beneath the surface — and more recently, above it as well — a very different picture seems to be emerging, one of growing tension within the party’s leadership. Apparently, the main source of this tension is differences of opinion over the practical strategy that the largest opposition party should adopt. So the public gestures and Monday’s tweets should be taken with a healthy dose of suspicion.

Perhaps more telling was the odd way both party leaders acted in the Knesset on Monday. They almost seemed like leaders of two separate parties. Lapid called a special press conference at noon and then stood alone on the podium to address the journalists in reaction to news of Prime Minister Benjamin Netanyahu advancing immunity measures. It was an opportunity for Lapid to deliver a very focused and aggressive opposition screed against Netanyahu’s moves, claiming they are intended to spare him from his impending legal proceedings. Lapid explained that Netanyahu “needs time to form his ‘get-out-of-jail-free’ government in order to pass the Immunity Law and Override Clause, which is basically the law in Turkey. It is a law that will turn us into [President Recep Tayyip] Erdogan’s Turkey.’’

With all due respect to Lapid’s remarks, what really intrigued the press was Gantz’ conspicuous absence. Why wasn’t he standing beside Lapid? Was this the beginning of a split? Lapid pushed back against these questions adroitly, sending the message that it all was business as usual in Blue and White. He suggested that the press wait to hear Gantz’ speech.

But the party did not hold its weekly Knesset meeting that day, and the rumors continued to fester. Gantz’ speech to the Knesset plenum just a few hours later was much more moderate, promising to fight for the rule of law “in the squares, in the neighborhoods, in the schools, in the media and in the legal arena.” As Blue and White stated that scheduling issues kept it from holding a party meeting that day, some observers commented that every party has its disputes among the leadership and over the agenda, just like [late Labor seniors] Yitzhak Rabin and Shimon Peres did in their day.

However, Blue and White is not the Labor Party, whose members had a party mechanism in place, along with an organizational structure and a legacy to hold them together. In contrast, Blue and White was formed just a few months ago, and most of its members are relative unknowns who did not go through primaries and were not active politicians. So visibility is extremely important. A big party like Blue and White, with 35 seats, must show off its tangible strength in the Knesset. This was especially on an important day like Monday, when it became chillingly clear that Netanyahu will do everything to avoid standing trial. On a day like that, Blue and White should have closed ranks and charged ahead as a consolidated force. Instead, the party’s two most prominent leaders set out separately for battle, and it ended up weakening the front.

Lapid is the key to understanding what’s really going on behind the scenes. His recent actions make it perfectly clear that he has no plans to be a silent backdrop to the chairman. Lapid intends to stand out, even if at Gantz’ expense. In practice, this means that while Gantz proceeds at a moderate pace, Lapid is storming the media and grabbing more attention for himself than any other figure in the party’s leadership.

As part of this strategy, Lapid paid a visit to the periphery town Yerucham on May 12 and toured the Phoenicia bottle factory, which is facing the risk of closure. He did so after the extremist Ger Hassidic sect ordered its followers to boycott the factory because its production line operates on the Sabbath. “This is the first step toward a Jewish-law state, and we must not allow that to happen,” Lapid declared during his visit. It was, in fact, a show of independence by the number-two member of Blue and White who wanted to signal that he is also chairman of Yesh Atid, an independent party with 15 Knesset members of its own on the Blue and White list.

Lapid was scheduled to be accompanied on this visit by a new Knesset member, former Yerucham Mayor Michael Biton, or at least that’s what the press release said. But Biton was conspicuously absent, arriving only after Lapid left. Were there sudden issues that kept him from arriving on time? Sources in Blue and White believe that Biton, who is aligned with Gantz, did not want to be associated with Lapid’s assault on the ultra-Orthodox. That is why, in an interview with the ultra-Orthodox Hadrei Hareidim website, Biton expressed reservations over Lapid’s position toward the ultra-Orthodox. A source close to Lapid told Al-Monitor on condition of anonymity, “Lapid disagrees with Gantz’ approach to the ultra-Orthodox and his desire to embrace them. It is a source of tension between them, because Lapid won’t toe the line with Gantz. He thinks it is a mistake that will ultimately be harmful to the Blue and White Party.”

There is also another reason some in Yesh Atid are critical of Gantz, who will soon hold the official title of leader of the opposition. Over a month has passed since the election, yet so far, he has failed to decide who will be the party's spokesperson.

Gantz has no grace period before facing off against Netanyahu’s rapacious approach to politics, and of this Lapid is well aware. The popular former chief of staff at number four on the list, Gabi Ashkenazi, has all but disappeared from the political arena since the election and Gantz has failed to stand out. Lapid has thrown himself into the vacuum with a modicum of elegance.

The battle over who will ultimately control the party has not yet become an open conflict. There is no blatant rift in the party’s leadership. There is, however, tension between the advisers working for Gantz and Lapid. Blue and White is a party with one item on its agenda: seizing the reins of power from Netanyahu. But it got off on the wrong foot, so now it must invent itself on the opposition benches.