On the eve of the release of the report on the failures of the political leadership during Operation Protective Edge, the country’s leaders have launched a war of versions in order to derive political benefit. 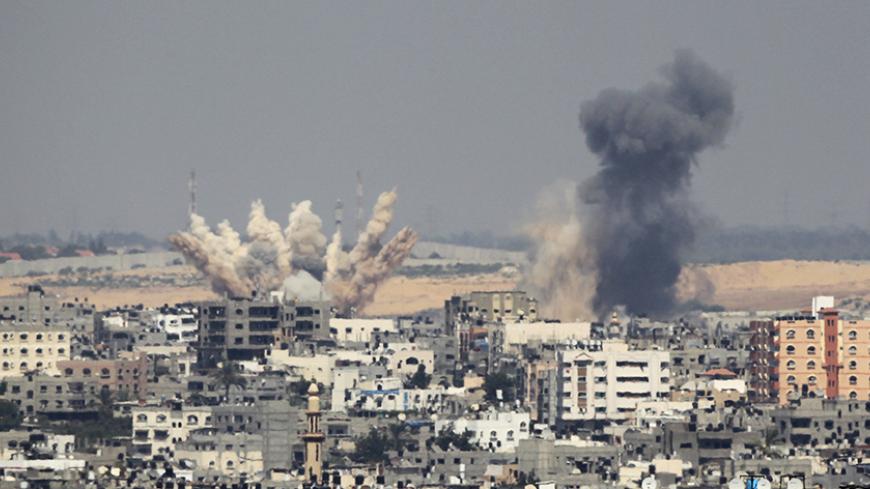 It was a well-organized and meticulously timed campaign, featuring pinpoint precision. On Jan. 24, HaBayit HaYehudi Chair Education Minister Naftali Bennett succeeded in establishing himself as the sole hero of 2014’s Operation Protective Edge among all the members of the Security Cabinet.

The reason behind this assault on the media is the state comptroller’s report on the war in Gaza, which is expected to be released in the next few days, and which (reportedly) includes sharp criticism of Prime Minister Benjamin Netanyahu and then-Defense Minister Moshe Ya’alon. Tensions in the political arena surrounding the report’s release, combined with Jan. 24’s annual conference of the Institute for National Security Studies (INSS), resulted in a battle of conflicting versions of events.

What turned their conflict into all-out war was the fact that these members of the Cabinet during Operation Protective Edge are still in the political arena, with some of them eying the prime minister’s office for themselves. These include Moshe Ya’alon, who was then the minister of defense; Avigdor Liberman, who was the foreign minister and has since replaced Ya’alon as defense minister; Naftali Bennett, then economy and trade minister; Yair Lapid, then finance minister and now a member of the Opposition; and of course Netanyahu.

The report is scheduled for publication next week. Until then, the multiple versions of events, the leaks, the quotes, as well as the storm brewing on social networks, will remain intermingled. As of now, Bennett is the winner in the media and is likely to benefit politically from it. And so, instead of engaging in a meaningful discussion about a report that presents serious failings in the actions of the Cabinet and military leadership, politicians are responding by turning the report into a tool to serve their narrow self-interests. This is why, even before published, the report is already losing its effectiveness.

A good way of describing the version battle over Protective Edge events would be the term “post-truth,” chosen by the Oxford Dictionary as the 2016 word of the year. Post-truth, wrote Oxford, is an adjective “relating to or denoting circumstances in which objective facts are less influential in shaping public opinion than appeals to emotion and personal belief.”

Indeed, what we have here is a battle of narratives, enhanced by social media. By the time the public is exposed to the state comptroller’s conclusions, its position would already be made.

The preemptive strike in the battle over the correct version came from Bennett, assisted by Israeli daily Yedioth Ahronoth. The paper’s front page was devoted to headlining its exclusive coverage of the “War Protocols,” which included quotes from Cabinet meetings held before and during the operation.

So, for instance, in a meeting held after the bodies of the three abducted teenagers were recovered on June 30, 2014 (prior to Protective Edge), Bennett is quoted as saying, “The response to the attack up until now has been weak and disgraceful," arguing that “In Gaza there are tens of tunnels ready for kidnappings; they are not there to rust."

Obviously, Bennett was the immediate suspect of the leaks. Of all the long hours that those meetings lasted, the dialogues that were ultimately selected for the article serve in his best interest, without providing any context for his remarks. In other words, there is no indication as to what was said before and what was said afterward.

It is therefore worth noting that according to Amos Harel, military commentator for the Haaretz newspaper, most of these quotes do not appear at all in the state comptroller’s report.

In his Jan. 24 speech at the Institute for National Security Studies, Bennett defined the report as a “security earthquake.” That evening he posted on his Facebook page, which has 430,000 followers, the video clip produced by the Yedioth daily with the selective (flattering) protocol quotes.

Ya’alon chose to present his version of events when he addressed the INSS on Jan. 24. During his speech, he attacked and ridiculed Bennett. For instance, Ya’alon insinuated that leaking the protocols was designed in order to “accumulate more ‘Likes’ on Twitter and Facebook,” adding that “anyone who does that is not fit for leadership.” Later he said, “If we would have acted as the polls would have us do during Operation Protective Edge, we would still be stuck in the Gaza quagmire.”

Ya’alon, who found himself on the same sinking boat as his enemy — Netanyahu — wanted to etch into the public opinion his own narrative. A narrative by which he acted responsibly, as a levelheaded leader. He was the one who saved the Israel Defense Forces from sinking in the Gaza quagmire.

But despite all his declarations, Ya’alon, much like Bennett, is also interested in accumulating Facebook “Likes.” He, also, is aware of the social media force and its influence on the adoption of a “narrative,” especially these days before the formal report is presented to the public. This is why he released his INSS speech on his Facebook page for his 76,000 followers, accompanied by the barb, “This morning the distinction between responsible, security-oriented, right-wing leadership focused on national interests, and the politics of ‘Likes’ and public relations became all the more clear”; a barb that “somehow” also appeared on the former defense minister’s Twitter account.

Another actor in this social media battle was Netanyahu. For Netanyahu, who fostered his image as “Mr. Security” for years, the report is tandem with an explosive bloc. It comes at the worst time possible for him, with criminal investigations closing in on him from every side and leaving him especially exposed. That is why he labored all Jan. 24 on an adequate response.

Much like his modus operandi ever since he discovered the wonders of social networks, Netanyahu didn’t rely on conventional media, choosing to broadcast live on his Facebook page his own speech that evening at a conference of local leaders. Inviting his 2 million followers to watch, Netanyahu wrote on his Facebook page: “Facts — not ‘Versions.’ Join me to a live broadcast from the local leaders’ conference.”

In order to disqualify Bennett’s quotes, he included in his speech lengthy quotes of his own from the Cabinet meetings at the time, demonstrating that he actually did present the tunnel threat in all its severity.

In Netanyahu’s case, much like the quotes in Yedioth Ahronoth, there is no indication as to what was said before and what was said afterward. Once again, the wild “post-truth” media arena offered the public an engineered version of the facts, designed to meet specific interests and needs (on Netanyahu, this time), even before the public could properly learn the facts. Netanyahu knows that he comes out bad in the yet-to-be-published report, which is why he is already preparing the ground. If it becomes necessary, he will have no qualms about challenging the legitimacy of the state comptroller himself by using his great skill of manipulating social networks.