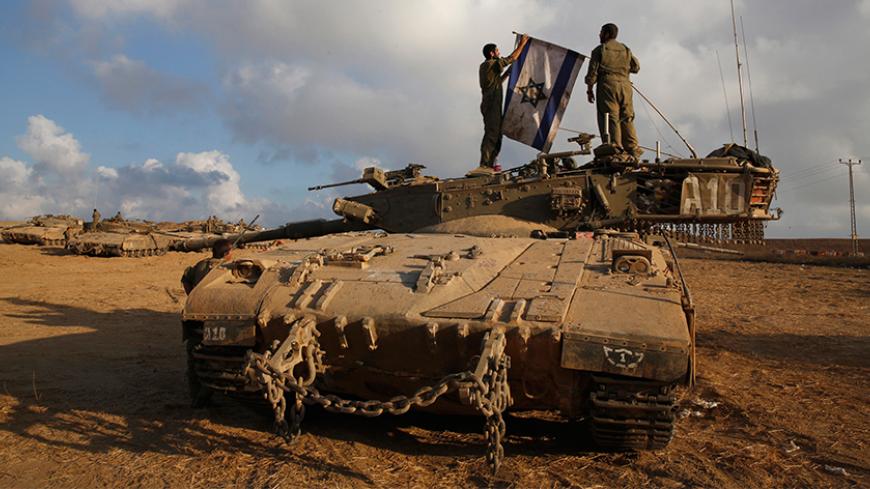 Israeli soldiers place their national flag atop a tank at a staging area near the border with the Gaza Strip, Aug. 4, 2014. - REUTERS/Baz Ratner

In early May, some 40 top Israeli officials received the draft of a secret report by State Comptroller Joseph Shapira. The report focused on Operation Protective Edge, which jolted Israel out of its tranquility in the summer of 2014. Within a day, certain sections of the report were leaked to the press, instigating all-out warfare among the country’s political and military leadership. Everybody was attacking everyone else: The prime minister and the minister of defense lashed out against the state comptroller, members of the former Cabinet attacked members of the current Cabinet, generals challenged generals, and Yisrael Beitenu head Avigdor Liberman had harsh words for everyone. That is what happens when an enormous, well-trained and well-equipped army spends 51 days plodding along against a small and besieged terrorist group, which was still able to fire rockets at Tel Aviv up until the very last moments of the campaign.

It doesn’t help that all of this is happening at the same time everyone is wondering when the next round of violence will break out in Gaza. Exchanges of fire between Israel and Hamas have started up again over the last two weeks, as the Israel Defense Forces (IDF) makes significant progress in finding a solution to the attack tunnel problem. In the past few weeks alone, the new technology developed by the IDF was able to detect two tunnels that penetrated Israeli territory. Israel now believes that additional tunnels will be detected soon, denying Hamas its underground front. Until now, this was considered its leading strategic asset and the only advantage it had over the IDF’s capabilities. Given the current situation, there is concern that even though Hamas is far from regaining the strategic capabilities it had before Operation Protective Edge, circumstances could cause both sides in the conflict to descend into another round of fighting much earlier than originally anticipated, perhaps even this summer.

Operation Protective Edge is hardly considered an Israeli success story. While it is true that Israel imposed considerable damage and destruction on the Gaza Strip, it also suffered 72 casualties (67 of them soldiers). It had a hard time taking effective actions against Hamas, which continued firing rockets until the very last moment of the campaign. For the first time since it was founded, Hamas had managed to strike at Tel Aviv, shutting down the otherwise tranquil metropolis for many long weeks and even causing Ben Gurion International Airport to close for two days. Yet even when faced with all of this, the Cabinet had a hard time making decisions. The IDF was reluctant to occupy Gaza, and operations to neutralize the tunnel system were only launched after long equivocations and at a steep cost.

Most of the criticism is directed at former Chief of Staff Benny Gantz, though the intelligence services don’t come out clean either. The “tunnel surprise” is considered a resounding fiasco. The intelligence forces failed to recognize the extent of the problem in time, the members of the Cabinet were not updated and failed to study the issue, and the IDF did not develop a method to fight against the tunnels. Instead it chose to improvise all throughout the fighting.

The draft report presents Israel as confused, indecisive and reluctant. Almost all of the prognoses that the chief of staff reported to the Cabinet fell apart in real time. Furthermore, the prime minister kept vital information from his ministers, including the state of munitions supplies, throughout the fighting.

As one senior Israeli security official confided to Al-Monitor on condition of anonymity, “If data on the number of missiles and shells fired during Operation Protective Edge was released to the public, everyone would be horrified.” Since it had no other solution, Israel used an enormous amount of JDAM (Joint Direct Attack Munition) bunker busters in an effort to destroy the tunnels. The system failed, but Israel had already used up a significant part of its stockpile, which it had accumulated for other, more worthy strategic purposes. Four tank brigades from the regular army (about 400 tanks) that participated in the campaign fired vast amounts of shells, almost depleting their stockpiles.

“What would have happened if we had been faced with a real war, and not this local skirmish in Gaza?” one senior Israeli officer, now retired, said to Al-Monitor on condition of anonymity, right after the operation ended in August 2014. In a conversation with Al-Monitor shortly after Operation Protective Edge, the late Mossad chief Meir Dagan expressed shock at the outcome, “We are being schooled by a tiny terrorist organization. They’ve been digging tunnels for years. We know that, and yet we didn’t plan for it or prepare a response. At one point, we were the people who initiated and investigated and came up with responses. Now it is them. It’s disturbing.”

Prime Minister Benjamin Netanyahu responded to the leaked draft with a full-out assault, while his closest aides were quick to release an anonymous attack on the state comptroller, reportedly labeling him as “not serious.” What Netanyahu seems to have forgotten was that he pushed for Shapira to be selected for the position and that Shapira was even interviewed by both Netanyahu and his wife at their residence in Jerusalem before he even took office.

Netanyahu backed away from his initial response just one day later when it became clear that the report’s criticism of the political leadership was not as assertive as originally thought and that most of its focus was on the IDF’s performance. It was only at this point that Netanyahu's associates actually started praising the draft report. A commotion erupted in the IDF when Maj. Gen. Yom Tov Samia, former chief of the Southern Command, lashed out against the way the IDF functioned during the military operation. His comments were met with an indignant public response by Maj. Gen. Sami Turgeman, who was chief of the Southern Command at the time of the operation.

Politically, the commotion caused by the draft report is being used by Knesset member Avigdor Liberman to continue his attacks against Netanyahu’s image as a security expert. Netanyahu, on his part, also aims his attacks personally at Liberman. “The closest thing to a bullet that ever came whizzing past his ear was a tennis ball,” Likud officials are now reportedly saying about the former foreign minister, while noting that Liberman hardly even bothered to attend Cabinet meetings.

The only person to maintain his silence is Minister of Education Naftali Bennett, who was a member of Cabinet both during Operation Protective Edge and now. He was the first person to recognize the threat posed by the tunnels as requiring immediate attention, and he even pressured the Cabinet to approve such actions toward the end of the operation. All sources agree that the draft report praises Bennett for his actions, a fact that he will certainly use to his advantage once the whole report becomes public. Meanwhile, he is letting everybody else squabble over the report’s findings and enjoying every minute of it.