Were Israeli ministers the last to learn about Gaza tunnels?

According to different sources, Israeli Cabinet ministers did not receive information about the tunnels dug by Hamas in 2014, though the information was gathered by Israeli intelligence and was transferred to Prime Minister Benjamin Netanyahu. 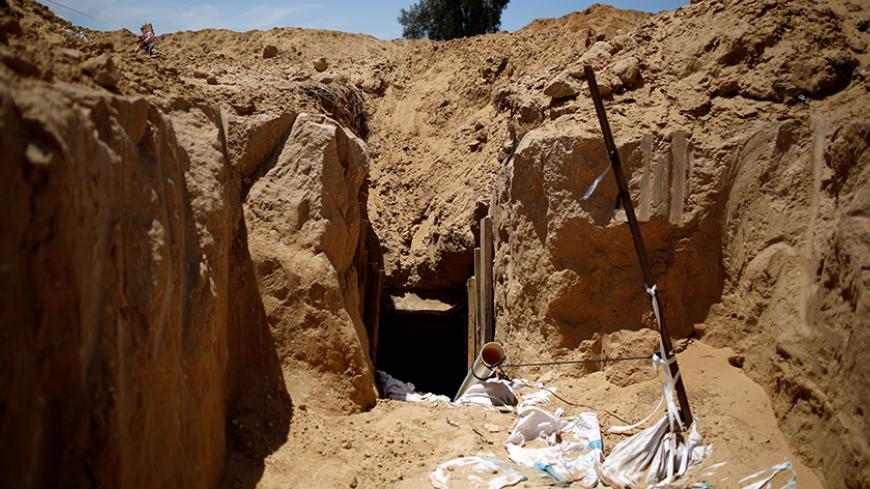 An entrance to a tunnel that Israel's military said it had discovered is seen just outside the southern Gaza Strip, Gaza, May 6, 2016. - REUTERS/ Amir Cohen

Political and military figures who read the Nov. 18 final draft of the state comptroller’s report on the issue told Al-Monitor that most of the criticism revolves around the fact that neither Netanyahu nor Ya’alon shared the IDF’s intelligence about the threat posed by the tunnels with the members of the Security Cabinet. In the meantime, the prime minister was hit with the “submarine scandal” (questioning Netanyahu’s motives behind the deal), which pushed the draft of the state comptroller’s report from the main headlines, though apparently not for long. The actual report is due to be released soon. It will inevitably lead to questions about how detailed, up-to-date information about the tunnels, known to almost every military officer of high and low rank serving in the Southern Command, was not brought before the Security Cabinet. As a result of this glaring omission, the IDF was left without a response to the armed Hamas fighters who penetrated Israeli territory during Operation Protective Edge in the summer of 2014.

According to sources who read it, the most recent draft of the report actually tempers its criticism of the IDF. At present, the state comptroller’s main criticism of the military branch is that the chief of staff, the head of the Military Intelligence Directorate and the other members of the General Staff should have tried harder to ensure that the Cabinet was warned about the tunnels. Netanyahu claims that the information was relayed to the Cabinet in 13 separate meetings. Nevertheless, the bottom line is that when armed Hamas fighters from the Nuhba (Elite) Unit burst out of the tunnels into Israeli territory on the eighth day of the fighting, it came as a complete surprise.

“The information was so obvious and familiar that no one imagined that this information — known by everyone — would never make it to the Cabinet,” said one Israeli military source to Al-Monitor, speaking on condition of anonymity. “What could people on our level do? Fire the chief of staff? Or maybe we should have interrogated the defense minister to see if he relayed the intelligence that we collected?” he asked angrily.

The IDF did, in fact, collect extensive intelligence about the Hamas tunnel project from various sources, open and secret alike. These included agents on the ground (it is the Shin Bet’s duty to relay their intelligence to the appropriate sources), aerial photographs (both from drones and balloons) and other conventional methods of intelligence gathering. All of these could have provided the Cabinet with a fairly precise picture of the enormous efforts invested by Hamas in digging the tunnels and preparing for a military conflict with Israel.

Another Israeli source told Al-Monitor on condition of anonymity that in addition to the normal collection of intelligence, there was also the “open collection” of information, which could have provided just as clear a picture of the vast tunnel project. In the case of the tunnels, this information was based on the testimony of Gaza residents who crossed the border from the Gaza Strip into Israel. When questioned, they described what they saw around their homes or on their way from central Gaza to the border crossings.

It is no secret that some of the Palestinians who pass through the Erez crossing are questioned there. Sometimes pressure is employed against them, too, with their transit permits to Israel made conditional on the information they provide. In the past, human rights organizations offered sharp criticism of the interrogation techniques that security forces use at the border crossings with the Gaza Strip, noting how they exploit the precarious situation of those people trying to make it into Israel. On the other hand, it is a fact that in the past, this questioning resulted in detailed information about the precise locations of the excavations in various spots along the border. This intelligence began to accumulate just a few months after Operation Cast Lead in 2009, when the military wing of Hamas began to bolster its border defenses with Israel. They did so out of concern that in the next campaign against Israel, the Izz ad-Din al-Qassam Brigades would have no way to respond to an IDF ground invasion of Gaza.

Given the scope of the work on this ambitious endeavor, it was impossible to hide the excavation work completely. The project required enormous amounts of manpower and heavy machinery. And it was necessary to hide thousands of tons of earth that was dug up near the border with Israel. All Gaza residents knew about the work, especially those living near where the tunnels were dug, because Hamas declared those areas “closed military areas” and banned Palestinians from entering them.

It is still too early to determine how the state comptroller’s report will impact Netanyahu and Ya'alon. Meanwhile, Hamas is now moving ahead full steam with even more excavation work.

The person currently responsible for the IDF’s preparedness for this exigency is Defense Minister Avigdor Liberman. Despite all his former threats, even he is doing nothing — at least for now. His main concern, he explained is that an IDF military action to destroy the tunnels will lead to yet another round of violence.