The report of Israel’s state comptroller about the management of the 2014 war in the Gaza Strip evokes officially for the first time the linkage between the distress of Gaza residents and the Hamas campaign against Israel. 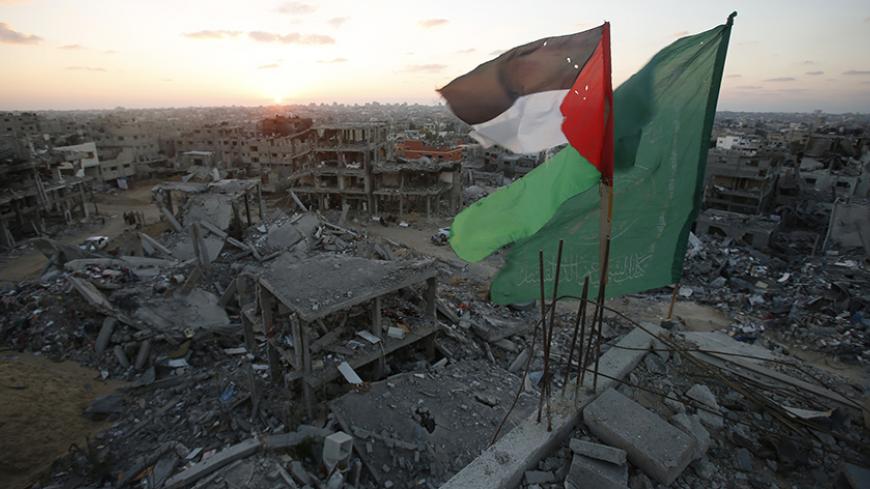 A Palestinian flag and a Hamas flag (R) flutter atop the wreckage of a house that witnesses said was destroyed during the seven-week Israeli offensive, in eastern Gaza City, Gaza Strip, Sept. 3, 2014. - REUTERS/Suhaib Salem

Israeli politicians and defense officials had been on tenterhooks for months awaiting the report issued Feb. 28 by State Comptroller Joseph Shapira on the government’s handling of its 2014 military Operation Protective Edge in the Gaza Strip. Virtually everyone anticipated that Shapira would focus on Israel’s lack of preparedness for the tunnel threat by Hamas. But the report also includes significant mention of the fact that decision-makers completely discounted any diplomatic and nonmilitary solution to the dire straits of Gaza’s Palestinian residents, which turned into an even greater security threat than the tunnels.

Shapira noted the April 2013 warning by the former Coordinator of Government Activities in the Territories (COGAT), Maj. Gen. Eitan Dangot. At the time, Dangot reported to the government about the severity of the humanitarian crisis in Gaza, and gave his assessment that it could blow up within two years, but the prime minister and his ministers were unimpressed. Their discussions about the Gaza Strip focused solely on military options to counter Hamas threats. "The security-diplomatic Cabinet, especially Prime Minister Benjamin Netanyahu himself, did not give any consideration to the fact that Israel itself was creating an imminent major security threat from Gaza and endangering Israeli lives."

Several times in his report, the comptroller cites comments made by then-Defense Minister Moshe Ya’alon on the second day of Operation Protective Edge (July 9, 2014) that “had a response been given to the distress … of Hamas several months ago, the Hamas movement might have avoided the current escalation.” Ya'alon’s 20-20 hindsight nonetheless provides concrete proof that everyone knew and understood the link between the Israeli siege of Gaza and the ensuing war.

This is the first time that the state comptroller, and in fact any senior Israeli official, clearly draws the simple line with which every resident of Gaza is familiar: between disproportionate economic pressure and inevitable war and bloodshed. Retired Judge Shapira dares to confront the fact that all recent Israeli governments energetically denied: that there is a direct link between the siege, the growing military strength of Hamas and the rockets fired at southern Israeli towns and villages.

But the suffering of Gaza’s residents did not begin in the spring of 2013, when then-COGAT Dangot warned of an impending humanitarian crisis. Nor was the link between the siege and the violence to which it spurred Gaza residents only discovered in the summer of 2014. Operation Protective Edge was the third large-scale military operation mounted by the Israel Defense Forces in Gaza since the siege was imposed a decade ago following the Hamas takeover of the Gaza Strip. It was preceded by Operation Cast Lead in 2008 and Operation Pillar of Defense in 2012. Dozens of Israelis and thousands of Palestinians were killed during those years, but the security threat to Israeli residents of the south, in the form of thousands of Qassam rockets fired at them, only intensified.

Throughout this period Israel ignored the fact that it cannot continue to maintain a stranglehold on more than 1.8 million people without dangerous consequences. In my book “To Know Hamas” I exposed a series of messages that the Hamas leadership in Gaza tried to convey to Israel through various businessmen following its takeover of Gaza in June 2007, and its promise that if the siege is lifted and residents are able to lead normal lives, the movement would declare a cease-fire and a halt to terror attacks against Israel.

Ghazi Hamad, the former chief-of-staff of then-Gaza Prime Minister Ismail Haniyeh, confirmed my reporting and admitted that Haniyeh had given his blessing to those contacts. But the Israeli prime minister at the time, Ehud Olmert, and defense officials in Jerusalem, rejected all the messages out of hand, assuming that the siege would bring down the Hamas regime — an assumption that has since proven false. Hamas went on to grow significantly stronger, firing rockets at towns and villages in Israel’s south to try and force Israel into negotiations over lifting or easing the siege.

During the first year of the siege, the Israeli civil administration compiled a document listing “luxury” goods banned for entry into Gaza. Shampoo, processed hummus, coriander and schoolbags were among the goods that Gaza residents were banned from having, to create controlled shortages but not a humanitarian crisis. Israeli authorities even calculated the exact number of calories a person would need to consume daily to avoid malnutrition (2,279 calories), and based on this figure they calculated the number of food trucks that would be allowed into the Gaza Strip.

In response to the comptroller’s report on Operation Protective Edge, a senior Hamas official told Al-Monitor on condition of anonymity that the ramifications of the siege should have been published 10 years ago, or at least after the first clash in 2008. “We tried everything to get the siege removed and maintain people’s dignity, but each time Israel only tightened it more. What choice did we have if not to resist those seeking to starve us and strangle the residents? Would you have sat by doing nothing?”

According to the official, those messages were conveyed to Israel both by the Egyptians during the presidency of Hosni Mubarak and by the European states.

Shapira’s report does not encompass the entire period of the siege imposed in 2007, focusing only on the events and circumstances that led to Operation Protective Edge. But in retrospect it is clear that the longer the siege is in force, the bigger and bloodier the rounds of fighting.

The blunt conclusions by the state comptroller are unlikely to result in any change, and the political and defense leaderships are not likely to accept that the siege is wrong and must be lifted. It is safe to assume that the subjects of his criticism prefer to clash in the political arena and to argue over who was the first to understand the threat of the tunnels, while continuing to ignore the overriding problem.