There are voices in Israel demanding retaliation against Hamas whenever it gets involved in West Bank terror attacks. 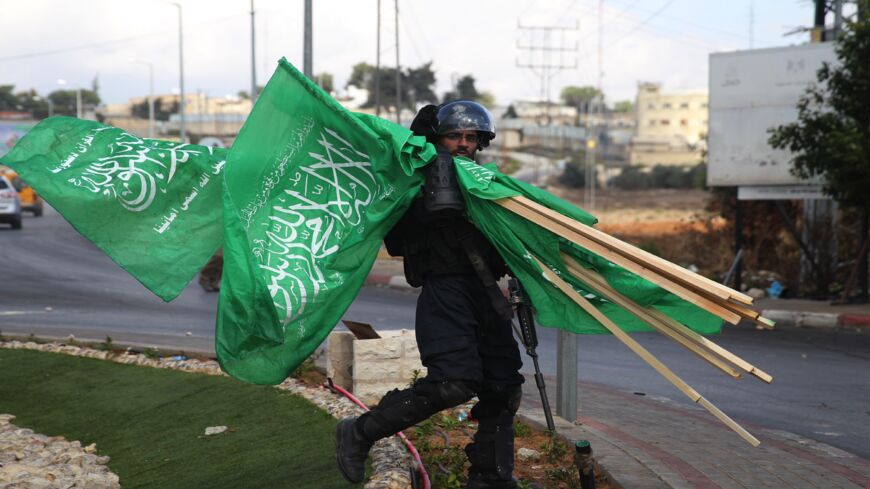 A member of Israel's security forces carries flags of the Palestinian Islamist movement, Hamas, that were seized during clashes with Palestinian protesters in Beit El Jewish settlement, north of Ramallah, in the occupied West Bank, on Oct. 8, 2015. - ABBAS MOMANI/AFP via Getty Images

At the end of Operation Guardian of the Walls half a year ago, Israel estimated that a renewed conflict with the Gaza Strip was only a matter of time, even a short time. As a result, the Israel Defense Forces was instructed to prepare for a renewed escalation with the Gaza Strip, and the Intelligence Branch renewed its target bank in Gaza. In actuality, despite Hamas’ threats and its sense that it had the upper hand in the last conflict, the last half year was one of the quietest between Israel and Gaza. And since the operation, only five rockets have been fired toward Israel.

According to Israeli estimates, there are several reasons for the relative quiet.

The first is Israeli deterrence, which, according to the security establishment, remains strong. Another reason is the civil policy of Israel in Gaza under the current government, which, among other things, allows 10,000 Gazans to work in Israel. According to reports in recent days, this number could soon increase to 15,000. A third reason, perhaps the most significant, is Egyptian mediation efforts to reach an Israel-Hamas agreement, which are continuing intensively and are apparently restraining Hamas.

With this goal in mind, an Egyptian intelligence delegation visited the Gaza Strip in mid-December. But while Egyptian mediators were mediating, threats were heard from Gaza of starting another conflict with Israel. The official reason for the threats was the conditions for Palestinian prisoners in Israeli prisons. These had been changed as part of the steps the Israel Prisons Authority has taken to tighten internal security following the September escape of six prisoners from Gilboa Prison.

Despite the estimate that Hamas’ threats are only a signal of distress and do not point to a real desire to restart the conflict with Israel, the Israeli security leadership is preparing for any possibility. It is not discounting a situation where some event or another in Israeli prisons would cause the Palestinian Islamic Jihad to break the security quiet between Israel and the Gaza Strip.

The Egyptian mediators who arrived in Gaza are trying to advance several issues between Israel and Hamas, including, among other things negotiations for a prisoner exchange deal, rehabilitation of the Gaza Strip and a prolonged quiet between the sides. According to security sources, Israel has not changed its position. It still conditions the advancement of Gaza rehabilitation on solving the issue of Hamas returning two Israeli nationals and the bodies of two IDF soldiers it is holding. More so, for now at least, Israel is not expected to be flexible, especially since its leaders are not encountering immediate public pressure to return the bodies of the two IDF soldiers in exchange for releasing hundreds of Palestinian prisoners, some of them terrorists with blood on their hands.

At the bottom line, despite stuck negotiations and Hamas threats, the basic estimate in Israel is that as of now, especially as the Omicron variant threatens to spread in Gaza as well, Hamas in Gaza is not interested in a renewed conflict with Israel, and its threats are interpreted as isolated distress and not as a directive to renew escalation with Israel.

Given the situation, the two sides are making use of the time to prepare for the next conflict, where the IDF’s emphasis is particularly on trying to find a solution to the steep-trajectory fire from Gaza. Hamas, for its part, is trying to rehabilitate its capacity that was damaged in Operation Guardian of the Walls, especially its rocket manufacture capabilities, which Israel damaged even after the operation.

The positive side for Israel is that in the time that has passed since the operation, the Israeli security establishment has managed since the beginning of December to complete the barrier it has been building for the past three and a half years around the Gaza Strip. Besides a high indicative fence that stretches 65 kilometers, the barrier also includes a subterranean wall that very effectively succeeds in denying Hamas one of its significant assets: offensive tunnels extending from Gaza territory into Israel. Israel is proud, justly, of the complicated engineering feat and clarifies that it will succeed in preventing one of the most significant threats to Israeli forces: the penetration of terrorists into Israel territory either above or below ground.

But the fact that neither Hamas nor Israel is interested in escalation in Gaza right now does not prevent Hamas from trying to inflame the security situation in the West Bank, which already hasn’t been calm in recent days. Many in Israel’s security agencies believe that for Hamas, operating in the West Bank could be a relatively safe way of hurting Israel without risking a direct response. Indeed, although most of the West Bank attacks in recent days were perpetrated by local cells, Hamas has apparently been involved in directing or preparing them.

The Israeli concern regarding this issue is sharpened in light of the growing tension between Hamas and the Palestinian Authority, and of the weakness the PA is showing in the West Bank in dealing with attacks originating from its territory. According to estimates, the proliferation of “successful” attacks only further erodes the rule of the PA on the ground and increases sympathy for attackers and terror organizations.

As this is the state of things, more and more voices are being heard in Israel calling for a response in Gaza if attacks perpetrated in the West Bank are indeed the result of Gazan direction. This can also explain reports in Palestinian media in recent days, according to which Israel has transmitted a message to Hamas through Egypt that if the organization does not stop directing attacks in the West Bank, Israel will target the head of Hamas' political bureau currently residing in Turkey, Saleh al-Arouri.