New Right senior Naftali Bennett has toned down his statements on the Gaza Strip over the past few days; he is interested in becoming the defense minister in a future Netanyahu government. 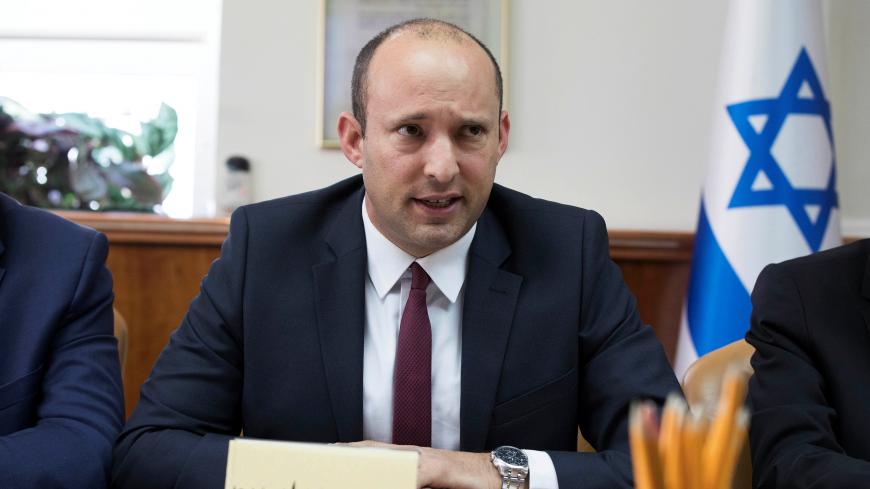 Prime Minister Benjamin Netanyahu’s reported plan to appoint religious right-wing politician Naftali Bennett as defense minister is being met with political hurdles, but Bennett is not deterred. He had indeed lost his once significant political power by this year’s two elections, but he keeps airing out his ministerial suit in the hopes of getting the post of which he has long dreamed.

The first harbinger of a rapprochement between the two men since Netanyahu fired Bennett in June from his position as education minister was an embarrassing Oct. 19 post by the chair of the New Right party, attacking Israel’s law enforcement authorities for going after Netanyahu. Netanyahu, he wrote in reference to the pending indictments against him, received “way too many cigars and champagne. That is indeed not okay, but not something over which to topple a prime minister.”

Following the Nov. 1 rocket barrage from the Gaza Strip on the southern town of Sderot, Bennett appears to have reversed his position, perhaps in order to prove himself worthy of the defense minister’s job. “… I am not in favor of a stronger or weaker response right now. There is no point in a somewhat stronger response as my friends on the right propose, because this would lead to another unnecessary mini-round of violence,” Bennett tweeted Nov. 3.

Strange. As a longtime member of the security Cabinet under Netanyahu, Bennett had no qualms about criticizing the prime minister, who currently also holds the defense minister’s post, and his predecessor Yisrael Beitenu leader Avigdor Liberman for their ineffectual policy on Gaza. For example, after weekslong tensions on the Gaza border, Bennett blasted Liberman at the end of September 2018. “In recent days, we have witnessed the dangerous results of Liberman's policy of restraint and his weakness regarding the Gaza Strip. More restraint equals more terror,” he said. "That's not how you manage a security policy, that's what a failed security policy looks like."

Six months later, prior to the April 2019 elections and following yet another escalation between Hamas and Israel, Bennett visited a house that had sustained a direct rocket hit in the collective farming community of Mishmeret, and lashed out at Netanyahu himself. “For a decade, Israel’s security chiefs have not known what to do about Gaza. … Netanyahu has also given up regarding Gaza. It is time for him to give me the keys. I know exactly what to do.” He even gave reporters a tip on how he intended to achieve his goal — a plan he nicknamed "burning the Chametz out of Gaza." His idea was destroying the homes of all the Palestinian terrorists in the West Bank and at the same time “dealing aggressively with the Hamas leadership.” He was presumably suggesting assassinating the group’s leaders.

In this regard, Bennett is no different from Liberman. On the eve of his 2016 appointment as defense minister, the hawkish chair of the Yisrael Beitenu party pledged that he would give Hamas leader Ismail Haniyeh 48 hours to hand back the bodies of two Israeli soldiers killed in Gaza and a few civilians it was holding. If he does not do so, Liberman warned, “He is dead.”

Bennett now seems to be shifting course. While Netanyahu was put off by the internal Likud party reaction to his plan and has put Bennett’s appointment on hold, Bennett is unlikely to stop eyeing the position and will continue to moderate his comments to prove to the prime minister that he can trust him and “hand over the keys,” as per his demand.

“Gaza is a complex, complicated, sensitive and dangerous problem,” a senior security source who served for years along Israel’s southern border told Al-Monitor on condition of anonymity. From the outside, however, things often look different. After all, that is what Liberman thought prior to taking office when he suggested eliminating Haniyeh and conquering the Gaza Strip. However, after repeatedly hearing the views of Israel Defense Forces (IDF) generals, a defense minister realizes that a military offensive will not resolve the festering Gaza problem and that yet another Israeli campaign will not lift the threat to residents of the south, just as previous ones over the past decade — Operation Cast Lead in 2008-09, Operation Pillar of Defense in 2012 and Operation Protective Edge in 2014 — did not.

"Mr. Security” (Netanyahu) arrived at the same conclusion. For the past year, through Egyptian mediation, he has been advancing a so-called arrangement with Hamas, with all its complexities and drawbacks. Israel a priori intended for the plan to advance slowly, as it has. It contains the short bursts of violence initiated by various Palestinian factions, which interpret the slow progress as an Israeli attempt to avoid fulfilling its commitment to lift its siege of Gaza.

Residents of the south, and especially of Sderot and nearby Gaza border communities, have been suffering real and threatened missile attacks for two decades. They are unable to conduct routine lives as most Israelis are, but all the proposals raised over the years promising a major military operation to fix the Gaza problem are simply unrealistic crowd-pleasers.

Bennett changed his tone because he understands that he must not repeat Liberman’s mistakes and make promises he cannot keep. Gaza is a repository of immense arsenals, including thousands of rockets developed and manufactured over the years by various organizations. Unfortunately, destroying them all is not a matter of days, not even weeks. Operation Protective Edge lasted 50 days during the summer of 2014 and did not remove the rocket threat to Israel. There are aspirations and then there is reality. For now, Israel’s security establishment has decided to give a chance to an “arrangement” with Gaza, with Egypt serving as mediator and tasked with ensuring each side adheres to its commitments. The guiding principle is to find a solution to the economic and humanitarian crisis afflicting Gaza and its 2 million residents, including a solution to the blockade imposed by Israel on the enclave in 2007, and at the same time ensure an end to all the violence. Only if this plan fails will Israel consider its “doomsday weapon,” i.e., toppling the Hamas regime.

While Bennett is beginning to understand the dangers of his previous declarations, opposition leader and prime ministerial candidate Benny Gantz is also promising to solve the Gaza problem. Gantz, who served as IDF chief during Operation Protective Edge, pledged Nov. 2, “We will restore deterrence at any price, even if we need to harm those personally who are leading the escalation."

Hamas leader in Gaza Yahya Sinwar responded with bluster, saying, “We are waiting for you. If you succeeded in putting together a government, we will make you curse the day your mother gave birth to you.”

Perhaps fearing that Gantz might make good on his threats — namely renew the policy of killing Hamas and Islamic Jihad leaders — Sinwar went on to warn Israel that the Palestinians could bomb Tel Aviv for six months. Sinwar certainly knows the consequences of a major military clash for his organization and for Gaza as a whole. His threats are designed to deter anyone seeking to replace Netanyahu, who has already learned that the Gaza issue has its own rules.

Still, Gantz preaches for different moves than Bennett or even Liberman. He argues that once deterrence is achieved, a diplomatic phase would be necessary. In other words, deterrence should be leveraged toward understandings or agreements. Gantz is not talking about an agreement that would include Hamas, but about an agreement with the Palestinian Authority and with the support of international organizations. Gantz’s plan for Gaza is for the moment more typical of election periods. Still, he claims to have the key to deterrence, which in turn would restore quiet to the Israeli communities in the south.

If Gantz does, indeed, form Israel’s next government, and if he does not wish for his current declarations to be used against him in the future by his critics, he will have to advance the opinion of the professional security echelons, that the Gaza issue will not be resolved by killing off its leaders.