Fierce battle amid leaders of the Israeli right

Education Minister Naftali Bennett and Defense Minister Avigdor Liberman are battling each other, as neither of them dares to confront the unbeatable Prime Minister Benjamin Netanyahu. 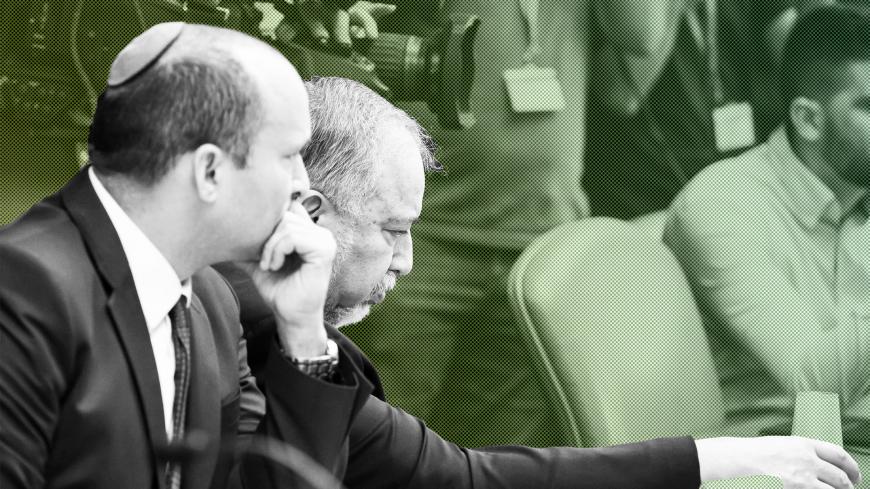 Most of the time, political squabbling in Israel starts just as war is breaking out. As soon as the Israel Defense Forces (IDF) start plodding into Gaza, Cabinet members start lashing out at one another in an effort to prove to their right-wing base that if they had their way, the government would not “allow Gaza to win.” Sometimes, they manage to restrain themselves and leave the feuding until the next round of fighting dies down. Then there is the case at hand, with two ministers, Education Minister Naftali Bennett and Defense Minister Avigdor Liberman, taking pot shots at each other even before the IDF sets off for another unnecessary round of fighting in the Gaza Strip. In this case, they are paying the bill even before they’ve eaten their meal — and in this case, they have good reason for doing so, especially Bennett.

Over the next few days, Prime Minister Benjamin Netanyahu is supposed to decide whether he wants to advance Israel’s next election to the first quarter of the coming year. Bennett needs desperately to distinguish himself from Netanyahu, who isn’t giving him as much as a foothold on the right. Meanwhile, Liberman is insisting that he continue to serve as defense minister in the next coalition, regardless of how many seats his party, Yisrael Beitenu, or Bennett’s party, HaBayit HaYehudi, actually win. Netanyahu has already promised his coalition partners that they will keep the same positions in the next coalition. That’s not good enough for Bennett. He would much rather be the minister of defense, knowing that it is a necessary stepping stone on his path to the Prime Minister’s Office.

Liberman describes Bennett’s claims against his Gaza policy as “messianic,” but that is hardly precise. Bennett does have some reasoned arguments based on the situation on the ground. He is not calling on the IDF to invade Gaza. In fact, he is firmly opposed to sending ground troops in without any preset expectations. At the same time, he also knows that Netanyahu and Liberman are doing everything they can to protect Hamas, just so that it is not replaced with a unified Palestinian partner in the West Bank and Gaza. What concerns Bennett is that the deterrence that Israel has built up during Operation Protective Edge in 2014 has since been worn down.

“What is happening now,” Bennett explained this week in a conversation with Al-Monitor, “is that rioters come right up to the fence, tear up several meters of it, penetrate Israeli territory, leave explosives and return to Gaza practically undisturbed. All the IDF ever does is shoot at their legs. The situation as it stands now is impossible. Liberman inherited a high level of deterrence and is leaving behind a scorched earth policy. I can’t recall any precedent of the IDF receiving orders to shoot at their legs when terrorists are actually penetrating Israeli territory. It doesn’t happen in the north. It doesn’t happen in the center of the country. The only place it happens is Gaza. Why?”

Bennett knows why. He knows that Liberman and Netanyahu are focused on the northern front. He knows that ever since the Great Return March — the popular Gaza uprising by the border fence — began last March, around 200 Palestinians have been killed and thousands more have been injured. He knows that another round of mass killing could ignite the Gaza Strip in seconds, which is exactly what Hamas wants. But he is outraged by the current approach.

“What the other side is actually doing is branding these terrorists as ‘kids with balloons,’” he said, referring to the ongoing campaign of incendiary balloons and kites launched from the Gaza Strip to the south of Israel. “But the people launching them are not kids, and those are not balloons. They are terrorists with explosives, Molotov cocktails, incendiary and explosive-carrying balloons, and a variety of other means, which are becoming more and more dangerous. I expect the defense minister to get the entire system in line so that we can end this party. I’ve been saying since day one that anyone who launches an incendiary balloon should be shot. That’s what any other sovereign state would do. If Hezbollah fighters infiltrated Israel tomorrow, they would be killed at once. The same thing should happen to Hamas.”

“You want to be defense minister,” I said to Bennett. “That’s the whole story, isn’t it?” Bennett did not deny his ambitions but claimed that they were irrelevant. “I am fighting for my positions. I fought when there was reconciliation with Turkey [in 2016], but unfortunately, I did not succeed then. I fought the decision to take away the metal detectors installed at the entrance of the Temple Mount compound [in 2017], and I lost, but I did succeed on other issues. We prevented the government from releasing terrorists, and now we are fighting to ensure Israeli deterrence in Gaza. We are fighting to maintain Israel’s sovereignty.”

The question that really embarrasses Bennett is why he insists on attacking the defense minister and not the prime minister himself. After all, Netanyahu is the final authority on all matters concerning policy. He can whip up Cabinet support and order the IDF to change its policies along the southern front. Netanyahu holds the keys, and while Bennett won’t admit it, attacking Netanyahu now would be political suicide. The prime minister’s strength among right-wing voters and even a significant part of the Israeli center is unprecedented. Bennett knows that he only stands to lose if he attacks Netanyahu, even if he does so with very detailed arguments from the right. He knows that Netanyahu will cannibalize him again in the rapidly approaching next round of elections. Bennett fears that the scenario of the last elections — when Netanyahu managed to bring HaBayit HaYehudi supporters to vote for Netanyahu’s Likud — will repeat itself. That is why Bennett must find himself another target that he can use to highlight and hone everything that distinguishes him from the other leaders of the Israeli right. His target is Avigdor Liberman.

Liberman doesn’t really like his new status as Bennett’s electoral punching bag and responds with everything he has in his arsenal. As aforementioned, he calls Bennett “messianic.” He exposes his political goals. He says that Bennett may attack the government’s policies in the media, but he still votes for them and has an impact on the decision-making process within the Cabinet. Liberman is trying to build up a reputation as the pragmatic, sensible and sane right. The problem is that the space for this to the right of Netanyahu is too narrow for both Bennett and Liberman. This leaves them fighting like alligators over a pond that is rapidly drying up. They both know that one of them will eventually be forced to concede. What they are fighting over now is which one of them it will be.