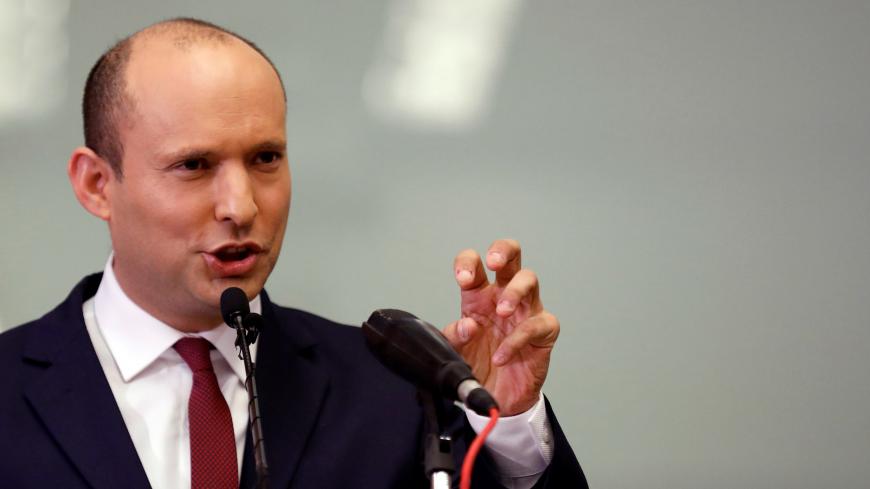 Israeli Education Minister Naftali Bennett gestures as he delivers a statement to members of the media, at the Knesset, Jerusalem, Nov. 19, 2018. - REUTERS/Amir Cohen

The leaders of the “national bloc” (Likud’s right-wing and ultra-Orthodox partners) met in the prime minister’s office Nov. 4 for another coordination meeting. The meeting was designed to ensure that there were no cracks in the united front the bloc presents to the Blue and White party in the coalition talks.

The bloc was first formed by Prime Minister Benjamin Netanyahu on election night, when he realized that he had failed to obtain a 61-seat coalition. At the Nov. 4 meeting, Netanyahu sat across from the heads of the right-wing and ultra-Orthodox parties, separated by a huge desk. It was impossible to miss New Right senior leader Naftali Bennett, who occupied the first row across from Netanyahu. Sitting in a corner, far away from Bennett, was his partner and ally for almost 15 years, former Justice Minister Ayelet Shaked.

The Bennett-Shaked partnership had driven Netanyahu crazy for many years as the two had created an important political force. But then, half a year ago, as a result of the April elections, it all came crashing down on them. While the two of them are still members of the same reduced faction known as the New Right, and while they still co-chair the aforementioned faction, it now seems like Bennett is on his way out. It looks like he will be joining the Likud, under Netanyahu’s patronage.

When the meeting was over, Bennett remained behind in the prime minister’s office for a private meeting with Netanyahu, which they had scheduled one day earlier. Despite earlier reports, Netanyahu did not offer Bennett the defense ministry. All the prime minister was willing to give Bennett was one of the unoccupied ministries and membership in the security cabinet. Bennett rejected the proposal, but did promise to remain loyal to the “national bloc.” Ironically, all of this happened just a few months after Netanyahu fired Bennett and Shaked from the education and justice ministries in a very aggressive and predatory way.

Even if Bennett was disappointed by Netanyahu’s current proposal, it was not enough to throw a monkey wrench into the rekindling of their relationship. Bennett has his eyes set on the Likud. He realizes that it is the only platform from which he can one day run for prime minister. That was, in fact, his original plan, but Netanyahu had blocked his advancement in the Likud for years, just as he blocked Shaked.

Over the last few weeks, Bennett spent many long hours in private meetings with Netanyahu. It was much more time together than anything they had together over the last decade. In fact, over the past few years they never held private meetings between just the two of them. All they shared was a lot of bad blood, which included efforts by Netanyahu and his wife, Sara, to besmirch Bennett and his wife, Gilat.

In contrast, the mood at this meeting was excellent. The chemistry between the two men was back. It was an intimate meeting, with plenty of political meaning. First of all, by courting Bennett, a weakened Netanyahu is ensuring that Bennett will not defect to a coalition headed by Blue and White leader Benny Gantz. In a circuitous way, it also prevents Shaked from doing the same thing. There have been rumors over the past few days that Bennett and Shaked have received very generous offers to serve in senior government positions in a Blue and White government, but that they rejected the proposals. Second, the fact that Bennett is drawing closer to Netanyahu means that Shaked gets left behind. It certainly gives him a much more prominent political and media profile than hers. As a politician, Shaked is all battered and bruised. She lost much of her prestige in the September election with the tepid results she garnered as head of the Yamina coalition of right-wing parties.

Bennett was pushed to the back of the line in the September election (being given the No. 4 spot on the Yamina list). Now he is reemerging as Netanyahu’s right hand. There are lots of examples of this. For example, just two weeks ago, Bennett released a post defending Netanyahu, and saying the reason for the investigations the Prime Minister is facing should be attributed to political persecution, plain and simple. Bennett went out of his way to support Netanyahu as a friend by writing, “Although he is a political rival, in this, at his darkest hour, I have decided to come to [Netanyahu’s] aid. Netanyahu isn’t perfect, but he was a very good prime minister for the State of Israel and its security.”

The post caused quite a commotion, as would be expected, and received over 6,000 responses. Many of these attacked Bennett for what was seen as his obsequious behavior when dealing with Netanyahu, who mistreated him for years and attempted to eliminate him politically. But Bennett dismissed this criticism and actually tightened his connection with Netanyahu. On Nov. 3, he supported the prime minister’s policy of restraint in dealing with Gaza, after a rocket attack on the town of Sderot. “There is no reason for a more aggressive attack, since that would lead to another ‘round,’ which would be unnecessary,” Bennett argued. This position was met with derision. There was the ever-present reminder that Bennett was once one of the fiercest critics of what he called Israel’s lax policy toward Gaza.

Over the last few days, Bennett has been helping Netanyahu by calling for the formation of a unity government. At an event in the Knesset Nov. 4 to mark the sixth anniversary of the death of Shas spiritual leader Rabbi Ovadia Yosef, Bennett prodded Gantz and Netanyahu to sit together in a unity government for the sake of all the people of Israel. Upon hearing this, Netanyahu looked up at Gantz and said, “Did you hear that?” It was hard to ignore the feeling that Netanyahu and Bennett had coordinated this exchange.

Another politician who is still in the midst of a long honeymoon with Netanyahu is Finance Minister Moshe Kahlon, who returned to the Likud right before the September election. It was Netanyahu who caused Kahlon to quit the Likud in the first place to form his own Kulanu party. When Kulanu crashed after the April election, Netanyahu and Kahlon, both of them seriously weakened, decided to draw closer again. Like Bennett, Kahlon has been particularly flattering to Netanyahu in the media. In one interview on June 14, he even called Netanyahu “a giant of a leader.”

Bennett and Kahlon have something in common. When Netanyahu was at the height of his power, he considered them rivals and blocked their advancement in the Likud. Now that he is at his weakest and busy fighting for his political survival, not to mention his innocence, they are returning to the Likud under his patronage. Senior members of the Likud are unhappy about this. They believe that the party’s leadership is crowded enough as it is. On the other hand, they also understand that this is all part of a process that signals the end of Netanyahu’s tenure as the party’s sole leader. Who knows? Yisrael Beitenu leader Avigdor Liberman quit the Likud in 1997 because of Netanyahu. Maybe now Liberman will also find his way home.