Despite calls for a military operation from critics, Prime Minister Benjamin Netanyahu has acted responsibly in refusing to engage in another Gaza war. 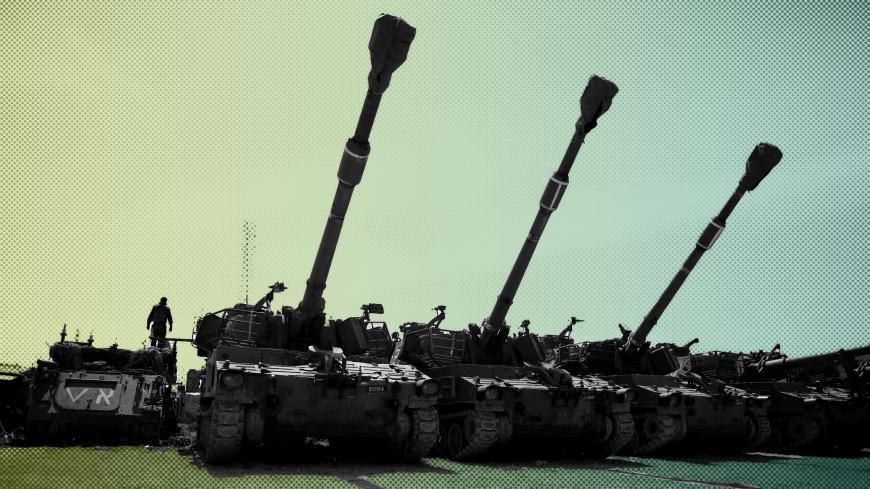 A battery of cannons is lined up near the border with Gaza, southern Israel, March 28, 2019. - REUTERS/Amir Cohen

Prime Minister Benjamin Netanyahu is fighting for his political life. He is using all sorts of questionable strategies and even crossing more than a few red lines in his attacks on his rivals Benny Gantz and the Blue and White party. On the other hand, he is showing great restraint on the Gaza front, carefully considering Israel’s response to the rockets that have been fired from there at the center of the country. Netanyahu's critics on both the right and the left have not missed an opportunity to depict Netanyahu as surrendering to Hamas' terror, but he is actually acting responsibly, especially in the face of all those eager to go to war.

Yes, we’re talking about the same Netanyahu who is referred to disparagingly as “easily pressured.” It is the same Netanyahu who worked hard to unite the far-right Kahane activists’ Otzma Yehudit (Israel Power) and pro-settler HaBayit HaYehudi to avoid losing votes. It is the same Netanyahu who is almost always quick to dance to the tune of the right; the one who will not let New Right leader Naftali Bennett pass him from that direction. While Netanyahu's political rivals have been offering voters populist solutions on Gaza that would allegedly work miracles and ensure quiet for generations to come, Netanyahu has made a point of walking between the raindrops. He’ll raise a fist to assuage his most belligerent supporters and then order the Israel Defense Forces (IDF) to act with all possible caution to avoid getting dragged into another military adventure lacking any purpose.

Gaza has experienced three full-blown wars since the Hamas coup of June 2007. Two of them —Operation Pillar of Defense (2012) and Operation Protective Edge (2014) — occurred while Netanyahu was in office. None of these wars solved Gaza’s problems or the problem of Gaza. They merely aggravated the already awful living conditions of the enclave's residents.

Naftali Bennett, whose New Right isn’t doing very well in the polls, is promising voters that he will fight Hamas. How? According to Bennett, the reason Israel stopped winning in Gaza is because the IDF appointed officers who are not “fighters” with every fiber of their being. He has called the IDF’s commanders for Gaza “parve” — the designation for kosher food that is neither meat nor dairy — to suggest the soldiers' lack of determination and has promised to bring back the “winning horses.”

In the spirit of the upcoming Passover holiday, Bennett presented a plan to uproot Hamas that he calls Operation Burning the Leaven. In other words, Bennett is suggesting war. There is no other way to interpret his operational proposals: not a single soldier will enter Gaza, or in other words, it will not be a land campaign; Hamas rockets will be strafed from the air; the Israeli residents of the localities surrounding Gaza will be evacuated temporarily, until the campaign is over and Israel is winning again; Hamas' leadership will be targeted for assassination; and Gaza will be demilitarized. What Bennett did not suggest is that the IDF would eliminate Hamas entirely. Maybe even he realizes that Israel would not be able to handle the vacuum this would create. That would be far riskier.

Yisrael Beitenu leader Avigdor Liberman, who until just four month's ago was Israel’s full-time defense minister, holds a similar perspective. He suggests returning to the policy of targeted assassinations. In 2016, when he was sitting on the opposition bench, he promised to kill Hamas chief Ismail Haniyeh within 48 hours if appointed defense minister. A week later, at the end of May 2016, he was appointed defense minister, but he did not order the killing of any Hamas senior member or come up with a solution for Gaza.

Netanyahu's attackers are not only on the right. The Blue and White, with three former IDF chiefs of staff among its top leaders, is also mercilessly battering Netanyahu over Gaza. On March 27, the party’s Twitter account featured a photo of Haniyeh making a V-for-victory sign at the ruins of his office in Gaza after the IDF had bombed it. The accompanying quote, from Gabi Ashkenazi, Blue and White candidate and former IDF chief, asserted, “Ismail Haniyeh’s victory photo is an embarrassment. It is the direct result of the collapse of our ability to act as a deterrent. Netanyahu is too busy with himself rather than with the residents of the south and the settlements surrounding Gaza.”

Throughout the campaign, the Blue and White has attacked the prime minister for “paying protection money” to Hamas, lending the impression that Israel is paying money so that Hamas does not attack it. The facts are very different, however.

The money concerned is from Qatar, and it was transferred to Hamas at the recommendation of the Israeli defense establishment based on the argument that controlled payments to civil servants in Gaza could postpone another Gaza war. Netanyahu put a temporary hold on the payments last January in response to criticism, but so far, he has been able to withstand calls to pulverize Gaza and to eliminate Hamas' leadership without thinking about the day after.

Unlike previous rounds of violence in Gaza, this time Netanyahu has ordered a concentration of troops along the Gaza border fence and called up reserves to give Israelis the impression that he will not hesitate to launch a full-scale campaign. The deployment of fresh forces and the call-up were not done because the IDF is about to launch a major operation into Gaza, but in preparation for the “million-person demonstration” that Hamas announced for March 30 to mark the first anniversary of the demonstrations along the border fence.

“We are tightening the security ring around Gaza,” Netanyahu said on March 28. “Over the last few days, I have ordered an increase of forces and weapons in order to be ready for a far-reaching campaign,” and added, “after all other options have been taken.”

In the last few days, an Egyptian intelligence delegation visited Gaza in an effort to prevent the situation from spinning out of control. They discussed an arrangement with the leaders of Hamas and with the Israeli defense establishment and asked both parties to show restraint until after the election.

There is no reason to be surprised by Netanyahu’s cautious approach. He has explicitly expressed his philosophy about Gaza on various occasions. In October 2018, he said, “I am doing everything I can to avoid an unnecessary war,” before going on to explain to journalists that he did not want the conflict to continue on a low flame, but would rather find a practical solution. Six years earlier, in 2012, Netanyahu had bragged that he is not eager to go to war or to get involved in unnecessary campaigns: “There has been no war in my seven years in office, and there has been a drop in the level of terrorism. We did not have a light finger on the trigger. On the contrary, our hand was firm and steady. There was no war because we relayed strength.” Israel launched Operation Protective Edge two years later, in 2014. It lasted 50 days.

Relying on past experience, Netanyahu now has his finger in the dam, against the flood of calls for war by his political rivals, while he bites his lip and avoids fighting an unnecessary war. It isn’t because of the election either. This is and was his position, even before calling for early elections. It turns out that the most controversial prime minister in Israeli history knows how to be the responsible adult in the room when it is necessary.