For Defense Minister Avigdor Liberman, Prime Minister Benjamin Netanyahu’s decision favoring a cease-fire with Hamas was the last straw in a series of policies he could not accept. 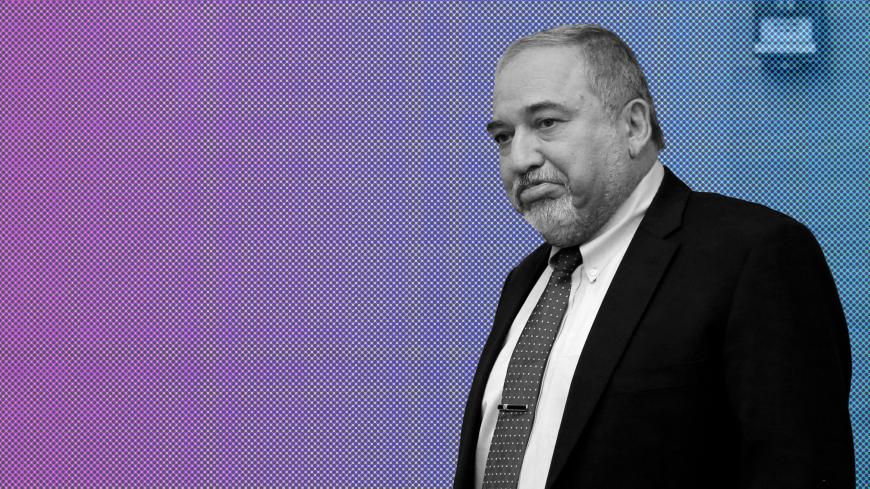 Before Avigdor Liberman even stepped into the defense minister’s shoes in May 2016, he announced that if he were to receive the Defense Ministry, the first thing he’d do would be to inform Hamas leader Ismail Haniyeh that he has 48 hours to return the bodies of the slain Israelis as well as the live Israeli citizens held in Gaza. If not, then he — Liberman — would issue an order for Haniyeh’s elimination. But on Nov. 14, it was Haniyeh who had the last laugh. It’s been two and a half years since Liberman received the Defense Ministry, and Haniyeh is alive and kicking while Liberman has just quit his job. He made the official announcement at a press conference that day. This was on the background of the military confrontation this week between the Israel Defense Forces (IDF) and Hamas, which Liberman himself qualified as “weakness.”

Hamas hurried to publish a merry victory announcement after Liberman’s resignation, despite the fact that they absorbed quite a few strikes from Israel’s air force in recent days. That’s how it goes in the Middle East: Everything’s topsy-turvy and nothing ever really ends. An alert Hamas man in Khan Yunis detected a small, covert IDF unit doing its thing deep in the Gaza Strip, and this caused a chain reaction that led to the resignation of Israel’s defense minister. One minute Israel and Hamas were a handsbreadth away from an arrangement and a graduated end to the violence, and the next minute a military confrontation erupts between them. Immediately afterward, Liberman returned his keys and resigned — all of this in four days.

Liberman’s resignation violated Israel’s most famous political rule, as formulated in the past by Ariel Sharon: “Always remain on top of the ship’s helm. Sometimes the helm will be up and sometimes down, but never leave it completely because there’s no way back.” Sharon meant that better to stay part of the government, on good days and on bad ones, rather than leave it for the opposition benches.

Liberman had been on top. The head of the Defense Ministry holds one of the most powerful positions in the country, with the exception of the prime minister. The minister is the official sovereign over the West Bank and is in charge of the most powerful defense system in the Middle East. Nevertheless, Liberman decided to give it up. He hopes that his resignation won’t take him away from the ship’s helm, on the contrary. In his resignation announcement, Liberman also called for elections as quickly as possible. Thus, Liberman beat his hated rival, Education Minister Naftali Bennett, as the one to leave a weak government that allegedly lacks the power to inflict a real military strike on Hamas.

And now, Bennett is held captive in Prime Minister Benjamin Netanyahu’s government. His party, HaBayit HaYehudi, rushed off to demand the defense portfolio for Bennett immediately after Liberman resigned. Netanyahu’s circle just as quickly announced that Netanyahu will adopt the portfolio himself. HaBayit HaYehudi threatens to dismantle the coalition if Bennett doesn’t get the defense portfolio, but this may also be a historic mistake: When the right in Israel brings down a right-wing government, the country may end up with a left-wing administration instead.

Liberman’s famous endurance failed him between Nov. 9 and Nov. 13. It all began when a Qatari gift of three large suitcases filled with dollars — $5 million per suitcase— reached the Gaza Strip. Liberman called this “capitulating to terror,” and he actually may be correct. “It’s like ‘protection’ money,” Liberman said in a meeting this week, according to a political source speaking on condition of anonymity. “We pay cash to the terrorists in exchange for some peace and quiet. The money is funneled directly to the families of those who tried to harm IDF soldiers. Actually, we’re funding the terror directed at ourselves.”

Then came the complications regarding the IDF’s special force unit in the depths of the Strip, which set the territory on fire within seconds and resulted in the death of a top IDF officer. Hamas, Islamic Jihad and additional factions launched close to 500 rockets at Israel, while the Israeli air force destroyed infrastructure targets and Hamas buildings while trying not to kill people.

The Cabinet convened on Tuesday night, where Liberman found himself in the minority again. Netanyahu had coordinated in advance with the Likud ministers and army heads not to wage war, but to return to routine life. Liberman made his decision in the course of the Cabinet meeting. He was no longer willing to serve as the punching bag of the right-wing electoral public. He knows that 2019 is an election year and that Netanyahu is inching closer to the end of his political life. He prefers to leave the Defense Ministry with his head held high rather than continue to crawl in Netanyahu’s shadow. He threw the keys back at Netanyahu without any advance warning. This is the second time he’s done that — the first time was in 1998 when he resigned from the role of CEO of the Prime Minister’s Office (that was also under Netanyahu).

As opposed to what has been recently disseminated, including here, Netanyahu is at the moment the last person to want swift elections. Yet despite this, Liberman’s actions may force elections on the prime minister against his will. Now everything depends on Finance Minister Moshe Kahlon, who is sick and tired of this term of office and ready for elections. It also depends on HaBayit HaYehudi chairman Naftali Bennett, who is determined to inherit Liberman’s seat in the Defense Ministry. If that doesn't happen, Bennett has no reason to try to keep Netanyahu’s 61 Knesset member slim majority coalition alive. But if indeed Netanyahu calls for early elections, Bennett would start his campaign at a disadvantage in light of the fact that Liberman was the first to resign in protest against the failings of the defense system and its weak anti-terror policies. In any case, Netanyahu will have to use all his political talents to keep the government together and enter 2019 weakened but not yet a lame duck.

Israel is entering an era of political chaos that will continue over the next few weeks. This tumult is taking place parallel to numerous machinations of the political system, headed by the new party that former Chief of Staff Benny Gantz is expected to create with the goal of carrying off all those who oppose Netanyahu’s regime. The prime minister can reshuffle all the cards by offering Gantz the Defense Ministry now. Such a course of action would neutralize Gantz as a political threat and cause much dismay among Netanyahu’s numerous rivals. It would be hard for Gantz to turn down the offer, though Gantz is surrounded by people who would recommend that he not accept such an offer.

Netanyahu will have to make dramatic decisions in the very near future. His maneuvering space has narrowed considerably, and we have not even spoken about the recommendations of the attorney general that are approaching on whether to indict him.

Nevertheless, Netanyahu is well-known for his knack of emerging intact from hopeless situations.