How Netanyahu outdid his rivals, again

Israeli Prime Minister Benjamin Netanyahu is the expert in exploiting security threats for political means, which is what he did in his speech after the resignation of Defense Minister Avigdor Liberman. 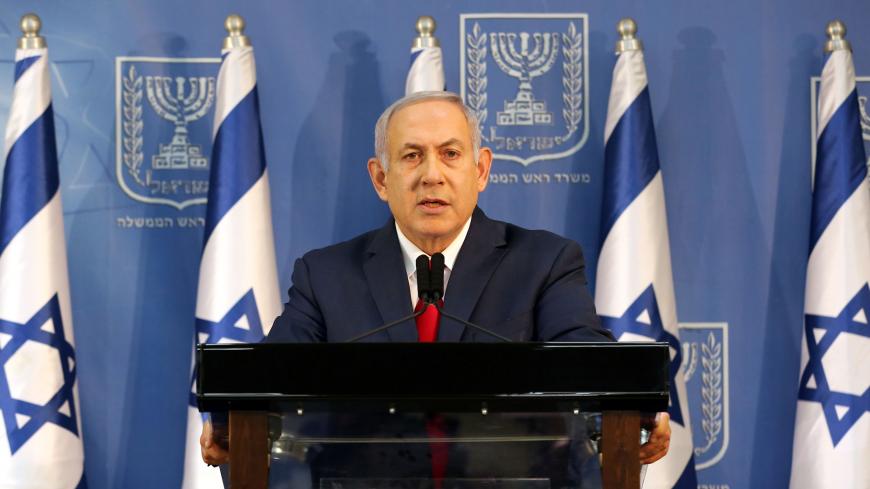 It really seemed that Prime Minister Benjamin Netanyahu’s coalition was on its way out on Nov. 16-17. Resigning Defense Minister Avigdor Liberman was in sync with Finance Minister Moshe Kahlon, who had his own reasons for wanting speedy elections in the near future. HaBayit HaYehudi’s Chairman Naftali Bennett also exploited Liberman’s resignation to issue an ultimatum to Netanyahu: Either you appoint me defense minister or HaBayit HaYehudi leaves the coalition to cause the immediate overturning of the government. (After the resignation of Liberman and his party, Netanyahu was left with a narrow majority coalition of 61 Knesset seats.) Even the ultra-Orthodox parties silently accepted the prevailing belief that the current Netanyahu government was on its way out. It seemed that only a miracle would allow Netanyahu to reboot the coalition, which would celebrate its four-year anniversary in less than six months. Netanyahu is a veteran miracle conjurer when it comes to politics, and in order to succeed this time as well he extricated his winning card yet again, his ultimate ace — the security situation. This was the card that won him the last elections in 2015, even though no real security dangers threatened Israel at the time. Netanyahu knows how to rouse sleeping demons, to concoct threats or embellish them for his political needs.

Netanyahu met with Bennett on Nov. 16, but no agreements were reached. In fact, Netanyahu had no intentions of entrusting the security helm to the hands of the hot-headed young education minister. On Nov. 18, Netanyahu met with Kahlon, but again no agreements were reached. Kahlon made it clear to Netanyahu that a narrow coalition of 61 Knesset members would inflict damage on the Israeli economy and it was best to hold elections instead. Therefore, Netanyahu announced that he would make a live statement to the media at 8 p.m. — on prime time TV, which is especially dear to his heart. Bennett heard this and in order to raise the stakes and the pressure on Netanyahu announced that he and Ayelet Shaked would release a statement the next morning. The entire political system began to pack their bags. Associates of Bennett and Shaked briefed the press that they had reached the decision to quit the coalition, unless Netanyahu would acquiesce and appoint Bennett as defense minister.

Netanyahu’s speech was about eight minutes long. He spoke in the first person, ostensibly from the depths of his heart, but veteran Netanyahu-watchers knew they were watching a show, a ruse and a trap. He devoted his opening words to his personal record as combat soldier and officer in the Sayeret Matkal commando unit and to the death of his brother Yoni Netanyahu in the Entebbe Operation. Netanyahu spoke about his own injury in the operation for the release of hijacked Sabena Flight 571, a skirmish in which he was almost killed in the Suez Canal and the many friends he had lost in the army over the years. He praised and glorified the Israel Defense Forces (IDF), the Shin Bet, the Mossad and even the police, which is currently conducting five criminal investigations against him and his wife. The prime minister spoke about life and death decisions, about the need to make fateful decisions without regard to one’s political agenda because national security aces all the other considerations, etc. He spoke like a leader during wartime — except that there is no war.

It was at this point that Netanyahu abandoned precise language for vague allusions. He said, "For obvious reasons, it is impossible to present to the public the full picture seen by the IDF chief of staff, IDF generals, the Shin Bet head, the Mossad head and myself. This is why you see only part of a very vast campaign that we are in the midst of, and that I am committed to follow through. … I will not say here tonight when and how we will act. … I have a clear plan; I know what needs to be done and when, and will do that."

Netanyahu continued to enumerate the many security threats facing Israel today, such as the Iranian nuclearization and many other issues that may or may not be revealed to the public. His punchline was, “We will overcome our enemies. I say this without diminishing one iota from the challenges we face, and I tell you in advance that self-sacrifice is involved. But I have no doubt that with the valor and courage of our soldiers, the inner strength of our citizens, we will overcome our enemies.”

This oration almost competed with Winston Churchill’s famous address of “blood, toil, tears and sweat” during World War II. Netanyahu scattered hints of a serious security challenge hovering above the nation, of the “sacrifice” that it will entail until the anticipated against-the-odds “ultimate victory.” Then he explained that a dismantling of the coalition of a right-wing government at this sensitive point in time would simply be a disaster that could spell destruction for the coming generations. In one speech, he turned Bennett not only into someone trying to promote himself to defense minister over Liberman’s body, but also to a political opportunist who will not rise to this historic occasion.

The next morning, Bennett got up, collected his wits and faced the cameras to announce the renunciation of his ultimatum and said that he will, indeed, remain in the coalition. He realized that Netanyahu had outflanked him and understood that if he would dismantle the government, he would be forever blamed for doing so on the eve of a security crisis. Of course, the million-dollar question is whether there really is an invisible security threat that threatens the Jewish state.

Much intelligence information regarding the northern front has evidently been gathered for some time. In his Sept. 27 speech to the United Nations General Assembly, Netanyahu disclosed information about Hezbollah’s clandestine bases with precise missiles hidden in various sites in Beirut, including a soccer stadium. The Israeli air force does not bomb Lebanon, in accordance with the rules of the game that were formed between the sides in recent years. Following Netanyahu’s words, Hezbollah evidently hurried to move these missiles to alternate sites. However, even if Israel will one day have to decide whether to bomb targets in Beirut, this is not a pressing, immediate decision nor a choice that has never been made before by Israeli leaders.

Ever since the establishment of the State of Israel, there has never been a period in which no intel existed about possible threats to the state. There have always been worrisome intelligence reports on plots and conspiracies against Israel, on weapons or plans to attack the country. Even the southern front is home to explosives and time bombs that can detonate at any given moment. Netanyahu knows that in the next crisis with Hamas, it will be harder for Israel to maintain restraint and return to daily life afterward. As prime minister he will have to pay an additional, weighty political price similar to the price he paid last week.  On Nov. 21, his great rival, former minister Gideon Sa'ar, called for a preemptive strike against Hezbollah and Hamas. Therefore, Netanyahu is not really lying when he says that the future “will dictate self-sacrifice,” but he is also not being precise. He is, as usual, constructing a threat and leveraging it for his political benefit. And this week, for the millionth time, he succeeded.