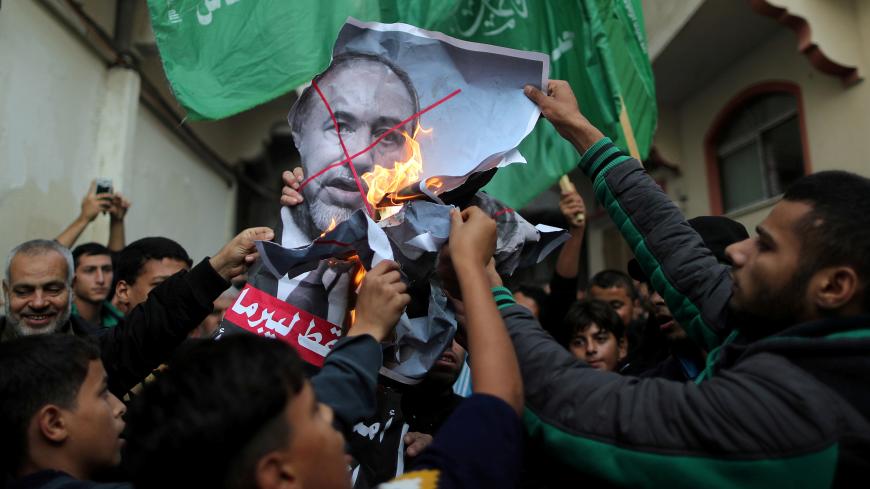 It is impossible to detect any damage inflicted on Israel’s deterrent or offensive capabilities by the Nov. 14 resignation of Defense Minister Avigdor Liberman. If anything, Israel’s deterrence and security stand to benefit from his departure.

His most recent contribution to Israel’s defense was his irresponsible Oct. 12 decision to cut off the fuel supply to the Gaza Strip. “Until violence in the Gaza Strip stops entirely, including the launching of incendiary balloons and the burning of tires near Israeli communities, the supply of fuel and gas will not be renewed,” he said. Liberman’s position was diametrically opposed to the advice of military and defense agency chiefs, who have repeatedly warned that a further deepening of the humanitarian crisis in the Gaza Strip would only result in more violence. Prime Minister Benjamin Netanyahu learned of Liberman’s move from the media. A few days later, he ordered the resumption of fuel and gas supplies to Gaza. The security cabinet also banned Liberman from halting humanitarian aid to Gaza without the approval of the government’s top defense and diplomacy forum.

While Liberman’s resignation does not constrain the military options of the Netanyahu government, the departure of Liberman’s party, Yisrael Beitenu, from the governing coalition does limit the government’s room to maneuver. Netanyahu is left with a narrow coalition of 61 Knesset members, and now the extortion capabilities of Naftali Bennett, chair of the right-wing Habayit Hayehudi, have skyrocketed. The current education minister is eyeing the newly vacated defense portfolio. His party’s Knesset faction has already announced that unless Bennett is named defense minister, the party will also quit the coalition. The seat would probably not be the party’s final demand. Holding the parliamentary balance of power in an election year is a surefire recipe for populist and irresponsible legislation. Anyway, how long can a government coalition survive at the mercy of Knesset member Oren Hazan, the Likud wildcard?

It does not take a great political genius to understand that naming Bennett defense minister would be repeating and even compounding the mistake of placing Liberman in the post in 2016. The two men spent the past two years competing for the title of Mr. Aggressive toward Hamas, courting right-wing voters and inciting them against the containment policy adopted by the government of which they are members. Speaking at a press conference in Paris on Nov. 11, Netanyahu promised to do everything he can to avoid an unnecessary war in Gaza. But one cannot make such a promise and then hand over the defense portfolio to hard-liner Bennett, who objected the cease-fire with Hamas as capitulation to terror and calling for military action. The combination of the cease-fire reached on Nov. 13 with Hamas and Liberman’s resignation provides an opportunity for change in Israel’s policy on Gaza and for a government reshuffle.

Changing Israel’s policy on Gaza means admitting that Israel’s policy of separation — differentiating between Gaza and on the West Bank — has failed. Instead of dealing with the symptoms that repeatedly wound innocent bodies and souls by reaching patchwork, temporary arrangements of various sorts with the Palestinians, Israel should deal with the root cause of the disease. Time will not heal the wounds. Absent a correct diagnosis and appropriate treatment, the victims’ condition will deteriorate. According to a UN diagnosis issued in September 2015, the previous summer's Israel-Gaza war, known as Operation Defensive Shield, left Gaza’s economy in ruins, effectively wiped out what was left of its middle class and relegated virtually the entire population to poverty and dependence on international aid.

The authors of this gloomy report by the United Nations Conference on Trade and Development warned that unless Gaza’s economic decline is halted, by 2020 the Strip could be declared “uninhabitable.” In the three years since, the situation in Gaza has deteriorated further. Unemployment is at a record high, the water is brackish and the rate of households suffering food insecurity is nearing 80%. The $15 million disbursed by Qatar last month to pay the salaries of Hamas officials are a mockery and will not prevent thousands of young Gazans from risking their lives by storming the border fence with Israel and exposing themselves to sniper fire. Unable to make a living due to Israeli restrictions on fishing areas off the Gaza coast and confiscation of their boats, Gaza’s fishermen spend their days in the mosques. The herbicide sprayed by Israeli planes on lands bordering Gaza not only damages the meager crops of the Palestinian farmers across the fence, it also poisons their children’s minds with hatred of Israel.

The latest round of violence with Hamas and its allies erupted this week after a botched undercover operation by Israeli special forces in the Gaza town of Khan Yunis. Similar mishaps and a renewed flare-up in the south are only a matter of time and luck. According to data shared by Al-Mezan human rights center in Gaza with the Israeli human rights organization Gisha, Israeli troops conducted 51 incursions into Gaza in 2017, an average of once a week. To maintain a stable cease-fire, Israel will have to abstain from such raids and clashes.

A long-term agreement with Hamas would require the opening of the border crossings between Gaza and Israel for the passage of people and goods. The long-awaited Israeli-Palestinian peace plan that President Donald Trump promised to unveil in the coming months is supposed to serve as a platform for negotiations between Israel and the Palestinians on a two-state solution and on the fate of the Gaza Strip. But even if Netanyahu agrees to launch serious negotiations on a permanent arrangement for the territories Israel conquered in 1967, the current coalition will tie his hands.

When late Prime Minister Ariel Sharon decided in 2005 to withdraw Israeli settlements and troops from the Gaza Strip, he took leave of the radical political right and established the Kadima party along with senior Labor leaders such as late President Shimon Peres, Haim Ramon and Dalia Itzik. If Netanyahu decides to complete the job Sharon started, he will have to send Bennett and his colleague Justice Minister Ayelet Shaked packing. The opposition – Labor leader Avi Gabbay, his Zionist Camp co-leader Tzipi Livni and chair of centrist Yesh Atid Yair Lapid — will not turn down Netanyahu’s invitation to fill those shoes. The Foreign Ministry has been awaiting a full-time minister ever since Netanyahu assumed the title in 2015. Now the Defense Ministry is also waiting.