Netanyahu’s political victory is only temporary

Prime Minister Benjamin Netanyahu won a political battle, but he remains with a narrow coalition and an eroded public image. 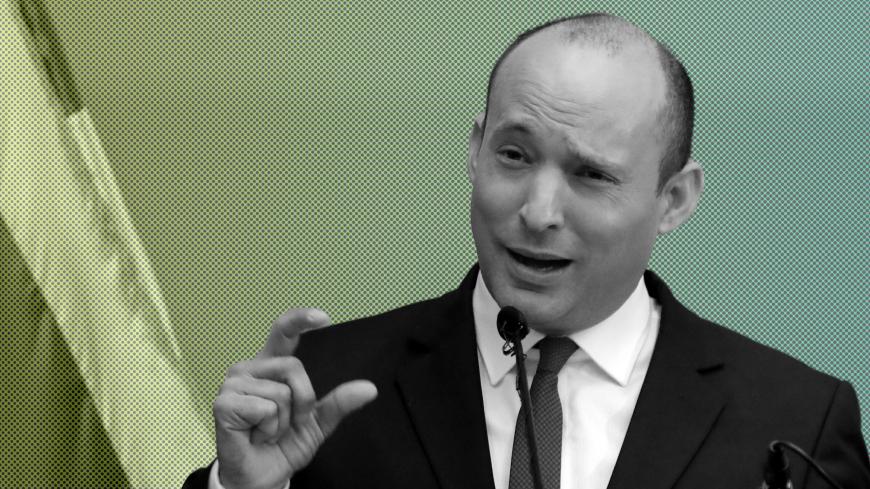 Israeli Education Minister Naftali Bennett gestures as he delivers a statement to members of the media, at the Knesset, Israel's parliament, in Jerusalem, Nov. 19, 2018. - REUTERS/Amir Cohen

Education Minister Naftali Bennett and Justice Minister Ayelet Shaked, leaders of HaBayit HaYehudi, have logged many hours with Benjamin Netanyahu over the years. They spent almost two years (2006-2008) with him as close advisers — Bennett as his chief of staff and Shaked as the director of his office — when he served as chair of the opposition and was preparing to run for prime minister. A clash with Netanyahu’s wife, Sara, forced the pair to leave a year before Netanyahu was re-elected to office.

Like many others who worked with Netanyahu over the years — ministers, advisers, spokespersons — Bennett and Shaked supposedly knew how he makes decisions. They were also familiar with the indecisiveness that grips him until the very last moment, his flip-flops and reaction to pressure, and his susceptibility to blackmail. In 2005, then-Prime Minister Ariel Sharon described Netanyahu as “easily panicked.”

Following the Nov. 14 resignation of Defense Minister Avigdor Liberman, Bennett saw an opportunity to blackmail Netanyahu. The ultimatum delivered by his party — appoint Bennett as defense minister or we walk out of your government — was based on his familiarity with the Netanyahu of old. The resignation of Liberman had left Netanyahu with a narrow majority coalition, and a departure by HaBayit HaYehudi would have meant the toppling of the government and early elections. Bennett knew that Netanyahu did not want to call snap elections at this point in time. He also knew that Liberman had left Netanyahu exposed and vulnerable to right-wing criticism over his allegedly insipid policy on Gaza.

Bennett must have assumed this was the opportunity of a lifetime: to walk into the defense minister’s office and succeed where others before him had failed, restoring Israel’s deterrence capability and resolving the seemingly intractable problem of the Gaza Strip. Bennett has been eyeing the defense portfolio for a long time, periodically lashing out at Liberman and claiming he and Netanyahu were weak on Hamas.

Bennett wants to be prime minister, but polls indicate the public does not find him fit for the job. On the other hand, his second-in-command, Ayelet Shaked, has surged in public opinion and is viewed as a potential successor to Netanyahu as leader of Israel’s political right. Shaked’s rising star has created tensions under the surface of her partnership with Bennett. This, too, led Bennett to conclude this was finally his moment. He had been sure he could get Netanyahu to fold, and that just as he forced him to give Shaked the justice minister’s job in the 2015 coalition negotiations, he would succeed this time with the defense portfolio.

However, Bennett miscalculated badly in failing to realize he was facing a new Netanyahu who since the 2015 elections believes he and his wife were solely responsible for the Likud’s impressive performance in garnering 30 Knesset seats. Netanyahu has become somewhat reckless during this term and far less susceptible to pressure. When he accepted Bennett’s ultimatum in 2015 and handed Shaked the justice portfolio, he did so based on practical considerations having to do with forming a viable governing coalition. This time, faced with a similar Bennett ultimatum, Netanyahu stood firm. It was a nonstarter. He had no intention of naming Bennett defense minister.

In March 2017, Finance Minister Moshe Kahlon similarly miscalculated in believing he could push Netanyahu into a corner over the newly formed Public Broadcasting Authority. Netanyahu stood his ground, and Kahlon almost found himself dismantling the coalition and facing snap elections he did not want. Kahlon, too, thought he knew Netanyahu best from their days together in the Likud. He was sure he understood Netanyahu’s thinking and found himself instead trapped up a tree, seeking a way down.

The miserable 24 hours that Bennett would rather forget began in the early evening hours of Nov. 18, when reports began surfacing that he and Shaked would resign the following day unless his party was handed the defense portfolio. Netanyahu responded a few hours later, announcing in a live television broadcast that he was taking over the job of defense minister “for the first time in my life.” The speech was largely personal in nature, alluding to his defense expertise, including his service as an officer in an elite commando unit, his injury in the operation to save the hostages of the Sabena hijacking, and the handling of Israeli security and defense issues over the past decade as prime minister. Netanyahu obviously also reminded his listeners that he had lost his brother Yoni in the dramatic Entebbe hostage rescue mission, and above all hinted broadly that Israel was facing a concrete security challenge and now was not the time for political adventures.

His broadcast delivered a knockout to Bennett on live television. The subtext was clear: Liberman and Bennett cannot hold a candle to my experience on defense matters at such a sensitive time.

This left Bennett with two bad options: to resign and be accused of bringing down a right-wing government, or to humiliate himself and hope the damage could be contained.

The next day, it turned out Bennett had opted for the second choice. The picture of Bennett sweating as he addressed reports at the Knesset with Shaked at his side handed Netanyahu a clear victory. While Bennett did direct deadly criticism at Netanyahu’s defense policy, accusing him of “containing the enemy rather than crushing him,” he would remain beside Netanyahu to ensure “Israel gets back to winning,” in his words.

Two politicians celebrated Bennett’s embarrassing performance. The first was Liberman, who did not conceal his enjoyment, accusing the education and justice ministers of sacrificing principles to remain in office. The second was, of course, the prime minister, who was in high spirits when he addressed his Likud party's Knesset faction several hours later and announced that elections would be held on schedule in November 2019. “I don’t need oversight from the right. I don’t need anyone to guard me. … I am protecting our state, our security, our children,” he said.

Netanyahu’s victory, however, could be short-lived. He has avoided snap elections for now, but he will have to restore the image he nurtured of "Mr. Security," which has been tarnished by his Gaza policy. Liberman’s resignation has also stuck Netanyahu in a narrow coalition, with only a one-vote majority in the Knesset (61 out of 120 Knesset seats) — a problem that became immediately evident when the coalition lost the vote on a government-sponsored property law the next day. The head of the opposition’s Zionist Camp faction, Knesset member Yoel Hasson, promised this was “only a promo” for other defeats to come. On condition of anonymity, a senior Likud minister told Al-Monitor in response that “Netanyahu declared elections would be held in 2019, but this clearly will not happen. There is no way to keep going with 61 Knesset members. The elections will be moved up and everybody knows it. The only question is the timing.”