Israeli Prime Minister Benjamin Netanyahu has lost political and personal credibility by appointing Avigdor Liberman as defense minister and with the state comptroller exposing his past financial dealings. 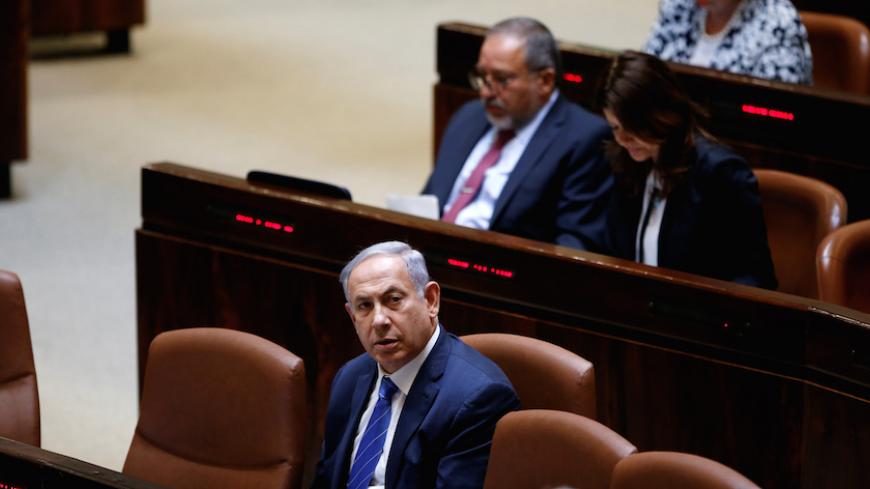 Israeli Prime Minister Benjamin Netanyahu (front) and Avigdor Liberman, the head of the far-right Yisrael Beitenu party, attend the opening of the summer session of the Knesset, May 23, 2016. - REUTERS/Ronen Zvulun

“As they say where I come from, give me a little credit,” Prime Minister Levi Eshkol said to his predecessor and rival, David Ben-Gurion, at the 1965 convention of the ruling Mapai, precursor to the Labor Party. Eshkol had sought said credit to lead the state. That was more than 50 years ago, before credit cards were introduced in Israel.

Not so long ago, Israel's current, well-heeled prime minister, Benjamin Netanyahu, had asked a civil servant for credit — that is, to put plane tickets for his sons on the civil servant's credit card. The police will invariably examine Netanyahu’s version of events, according to which when he served as finance minister more than 10 years ago, he was not in possession of a credit card, and therefore, according to a report by the state comptroller, asked a Finance Ministry official, Yechiel Leiter, to pay for the tickets.

Either way, Netanyahu’s personal and political credit is scraping the bottom of the barrel these days. It is becoming increasingly difficult to find politicians or rank-and-file Israelis who trust that the state is in good hands. A survey conducted by the Rafi Smith polling agency for Israel public radio, Kol Israel, indicates that if elections were held today for the 120-seat Knesset, a new (virtual) party headed by former Netanyahu Cabinet ministers Moshe Ya'alon and Gideon Saar, and including Finance Minister Moshe Kahlon, would get 25 seats, four more than what Likud (currently with 30 seats) would get. The centrist opposition Yesh Atid would get 13 seats, two more than it now has, and the opposition Zionist Camp would plunge from 24 seats to 11.

Netanyahu has survived a long list of political crises and extricated himself from quite a number of police investigations. Nonetheless, it appears that this time, the ground beneath his feet is starting to shake. In his panicked haste to plant his feet on firmer ground, Netanyahu hit Israelis’ most sensitive spot — security. Even Netanyahu’s most faithful mouthpieces, including Ministers Tzachi Hanegbi and Yuval Steinitz, are not claiming that Avigdor Liberman was appointed defense minister because his skills to deal with the complexities of the job are better than those of his predecessor, Lt. Gen. Moshe Ya'alon, who was pushed aside in late May. They have also not responded to the accusation by their Likud colleague and Knesset member Benny Begin that Netanyahu “acted irresponsibly toward the defense apparatus and Israel’s citizens.”

Kulani member Avi Gabbay, who resigned as environmental protection minister on May 27, is not the only member of the ruling coalition who thinks Ya'alon’s dismissal and Liberman’s appointment represent an “unusual step even in the cynical world of politics.” Gabbay is simply the only one who took the obvious step of walking out of his ministerial office and slamming the door. In a May 30 post on Facebook, Gabbay said, “Because I saw up close how things are decided and run for us, I intend to continue to work for the public and to seek ways to wield influence and effect change.”

Gabbay is an ideal potential candidate for the virtual political entity of Netanyahu rivals, alongside Ya'alon, Saar and other senior Likud officials fed up with the royal Netanyahu family. The same holds for popular Knesset member Orly Levy-Abekasis, who quit Liberman’s Yisrael Beitenu and the coalition on May 19 over the sidelining of social issues in the coalition agreement. It is hard to tell whether Netanyahu’s bizarre “discovery” of his Sephardic genes will improve his standing among disillusioned Israelis of Sephardic origin in poor, small towns and urban ghettos.

Liberman’s appointment also exposed the frail ties between Likud and its HaBayit HaYehudi coalition partner, whose chairman, Education Minister Naftali Bennett, feels, and rightly so, that he has come out a “real political sucker.” In March 2015, Netanyahu was able to keep his job thanks to the tens of thousands of HaBayit HaYehudi voters he talked into voting for Likud in the elections. His move shrank HaBayit HaYehudi from 12 Knesset seats to eight. If that weren’t enough, Netanyahu has now handed the most important government position, the defense portfolio, to Yisrael Beitenu, a rival right-wing party with a grand total of five Knesset seats.

Netanyahu has extricated himself more than once from seemingly doomed political situations. Now a regional peace initiative is supposed to do for him what the 2005 military withdrawal from Gaza and evacuation of the Israeli settlements there did for Prime Minister Ariel Sharon: free him of the threat of an international diplomatic initiative — a French-US plan for a UN Security Council resolution recognizing Palestine based on the 1967 borders — and push aside corruption scandals.

Officials involved in this latest move vis-a-vis Egyptian President Abdel Fattah al-Sisi for a regional conference, and who spoke to Al-Monitor on condition of anonymity, said that Liberman promised Netanyahu to support the initiative. A whiff of this could be detected in the praises heaped by Liberman on Sisi shortly after his May 30 swearing-in as defense minister at the Knesset. The sources expect that Zionist Camp leader Isaac Herzog will land the coveted foreign minister’s job and bring with him a few friends to fill the void that Bennett and his colleagues will leave in the government if they walk out.

Netanyahu’s situation, however, is far graver than Sharon’s was. Sharon split Likud and took the moderate wing of the party with him to Kadima, the new party he established, leaving behind a band that would not hesitate to bring down the government over the uprooting of distant, unauthorized settler outposts. There's also another difference: When suspicions arose concerning the alleged involvement of Sharon family members in criminal wrongdoing, Sharon’s son Omri assumed the heavy load and did jail time. Netanyahu cannot count on his wife, Sara Netanyahu, despite her loyalty, to go to jail in his stead, shouldering responsibility for the alleged misappropriation of funds at the prime minister’s residences and suspected travel freebies for his family. Netanyahu, in hoping that he will not be indicted, has no choice but to rely on the loyalty of the attorney general, the state comptroller and chief of police.

The prime minister may not pay with credit cards, but the credit he got comes with a due date. It should be hoped that the public — which extended Netanyahu’s line of credit in four elections and pays with its hard-earned money for his ice cream, restaurants and lavish hotels — presents him with the final bill.