Netanyahu’s defense minister gets him into trouble

Another haphazard decision by Defense Minister Naftali Bennett reshuffled the deck for Prime Minister Benjamin Netanyahu and led to an escalation of tensions in the south. 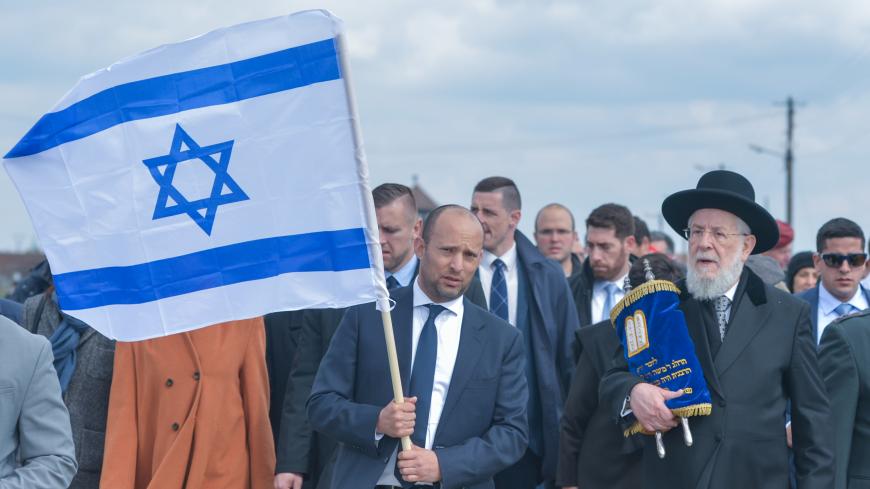 The last thing Prime Minister Benjamin Netanyahu needs now, one week before the March 2 election, is a new barrage of rocket fire from Gaza, regardless of which Palestinian group is behind it. All it would do is tarnish his image as “Mr. Security” and ruin his efforts to reach an arrangement, just when Israel is doing everything it can to avoid an armed conflict with Hamas. This includes sending the head of the Mossad to Qatar to convince them to continue providing financial aid to Hamas. In fact, Israel has gone so far as to grant 7,000 permits to Palestinians from Gaza, allowing them to work in Israel. What it all boils down to is another haphazard decision by Defense Minister Naftali Bennett, which reshuffled the deck for Netanyahu and led to an escalation of tensions in the south.

It began Feb. 23 with Palestinians documenting an Israel Defense Forces (IDF) bulldozer dragging the body of a Palestinian allegedly with Islamic Jihad along the border of the Gaza Strip, near the town of Khan Yunis. The IDF claims he and another terrorist were trying to plant a bomb alongside the border fence. The photo, which enraged the people of Gaza, showed young Palestinians trying to prevent the bulldozer from collecting the body. All in all, it looked like an immoral act of abuse by “the most moral army in the world.” Bennett responded with arrogance to this criticism, adopting Netanyahu’s old trick of blaming the left: “I’m fed up with the hypocritical criticism of the left over the ‘inhumanity’ of using a bulldozer to collect the body of a terrorist who tried to kill Israelis. To all you kind-hearted people out there, you’re the ones who are being inhumane! Hamas still has the bodies of [IDF soldiers] Hadar [Goldin] and Oron [Shaul].”

As criticism of the IDF’s mistreatment of the body intensified, Bennett’s partner in Yamina, Ayelet Shaked, spoke out in support of his decision: “When the Minister of Defense of a sovereign country decides not to give in to a terrorist organization that holds the bodies of its fallen soldiers, you (meaning the left) lose your humanity by refusing to recognize that it is necessary in order to bring our boys home.”

Both Bennett and Shaked are certainly aware that the bodies of terrorists, or for that matter, even live Palestinian prisoners arrested while trying to cross the border, are not real bargaining chips in negotiations with Hamas. Ever since Operation Protective Edge in 2014, Israel has been holding indirect talks with Hamas to get the bodies of Goldin and Shaul back, but to no avail. Hamas refuses to link the understandings reached in its arrangement with Israel with the return of the fallen soldiers’ bodies or the two civilians, Avera Mengistu and Hisham el-Sayed, that it is holding hostage. The defense establishment has already come to terms with the idea that a deal like that comes with a price tag, and that its implementation depends on Israel’s willingness to pay, i.e., to release hundreds of Hamas prisoners held by Israel in exchange for the bodies. As of now, there is no willingness on the Israeli side. Goldin’s brother Tzur said as much last December: “My brother is not part of the arrangement. His name didn’t come up [in the arrangement talks] in any way, at any stage.”

Even assuming there was some logic in Bennett’s decision to collect the bodies of dead terrorists, it was totally inappropriate to collect this body with a bulldozer and drag it away, not to mention that it put the driver’s life in danger. It would be interesting to know what Bennett and Shaked would say if Hamas acted that way to an Israeli casualty.

In May 2004, six IDF troops were killed in an attack in the Zeitoun neighborhood of Gaza. Israelis were horrified, and rightfully so, upon seeing photos of Hamas activists displaying the soldiers’ body parts. “Animals!” screamed the headlines in all the country’s newspapers. Then-Defense Minister Shaul Mofaz declared, “We will lay hands on everyone who desecrated those soldiers’ bodies. We have a bitter and profound account to settle with them.” In contrast, Defense Minister Bennett sees no problem with using a bulldozer to carry the terrorist’s body, even going so far as to say that it was all done for humane reasons. In an interview with Army Radio Feb. 23, he explained, “From the moment I took over the office, I gave orders to collect the bodies of terrorists and, if possible, of live Hamas members too. There is nothing more humane than bringing our boys home.”

That same day, the Adalah human rights organization sent a letter to the chief military advocate, Maj. Gen. Sharon Afek, demanding he open a criminal investigation into what was described as “brutal behavior by the Israeli military and the desecration of the dead.” It went on to note that this violated the Geneva Convention on torture, to which Israel is a signatory.

Minister Yuval Steinitz of the Likud was similarly critical of Bennett and the IDF’s actions. “We need to examine and investigate the way the IDF evacuated the terrorist’s corpse from the scene. It caused us unnecessary damage.” It must also be said to Netanyahu’s credit that he acted with reason during his time as minister of defense. On more than one occasion, he pushed back against calls to occupy Gaza and bring down the Hamas regime. But this time, he didn’t react at all. As a political figure close to him said anonymously as far back as October 2018, “Netanyahu wants there to be a purpose behind any military operation in Gaza. While it is possible to conquer Gaza and replace Hamas, we have yet to find any volunteers to take Gaza from us after we do that. If there was someone to whom we could give Gaza, maybe we would have already conquered it again.’’

Fear that he might join up with Blue and White’s Benny Gantz is what ultimately caused Netanyahu to give Bennett the Defense Ministry, even though Bennett was battered and bruised politically in two successive election campaigns. As I noted in a previous article, Bennett has been trying ever since to rehabilitate his political career by making decisions that have come under fire from senior members of the defense establishment and by trying to take credit for things that never happened in order to impress his potential voters. In an interview Feb. 15, Bennett said, “From the three months before to the three months after I entered [the position of defense minister], the number of rockets dropped by 80%.” When Haaretz looked into this boastful interview, it found that the number of rockets fired at Israel actually doubled since Bennett took office. Of course, that does not include the dozens of rockets fired by Islamic Jihad over the last two days.

To what degree will the current round of violence hurt “Mr. Security” Netanyahu? Right now, it is hard to tell. In the September 2019 election, residents of the south voted for the Likud en masse, despite all their complaints that they had been neglected.

It is reasonable to assume that Netanyahu is well aware of how dangerous Bennett is in the Defense Ministry and that all of his arrogant moves and tweets are intended solely to improve his position politically. On the other hand, Netanyahu also has a tendency to appoint ministers and make decisions intended solely to extricate himself from the corruption scandals for which he has been indicted.