Israel and Hamas have agreed to a modest arrangement involving nonviolent demonstrations along the fence while the Gaza siege is temporarily eased. 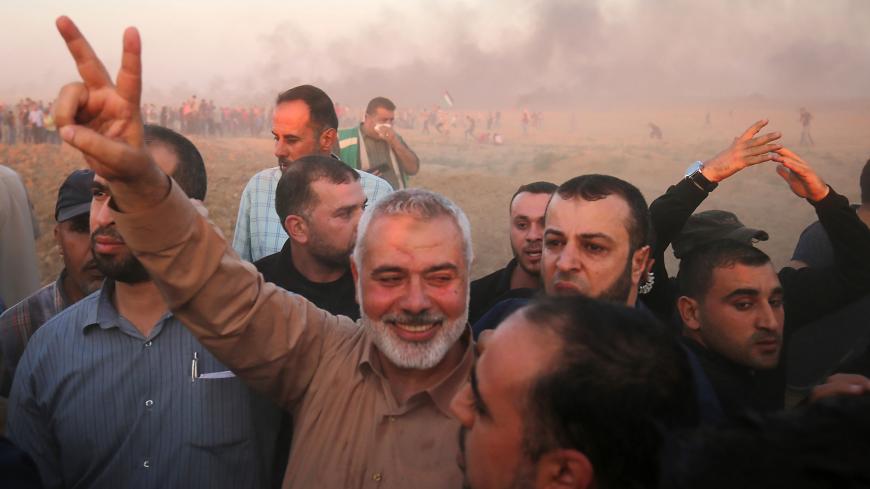 The leadership of Hamas and Islamic Jihad announced Nov. 1 that they accept the understandings reached with Israel through Egyptian mediation: transitioning to nonviolent demonstrations along the fence while the siege of Gaza is eased. The joint announcement was made at the end of a meeting between the heads of the organizations (including Hamas' military arm) at Hamas political bureau chief Ismael Haniyeh's office in Gaza. The groups decided to give the plan a trial period of six months.

The meeting took place to officially announce the organizations’ acceptance of the arrangement, a decision that was made before they arrived. The goal was to show, at least for the sake of appearances, that the Hamas military arm agreed to the request of the political wing and is prepared to give the Egyptian initiative a chance.

The mini arrangement was initiated by Egypt after the chances of a broader arrangement were deemed to be nil. Palestinian President Mahmoud Abbas categorically refuses to enter Gaza and take part in an arrangement despite the enormous efforts expended on it.

Another of the obstacles to the arrangement is Hamas' unwillingness to give up its demonstrations at the border, out of concern that if the arrangement doesn’t work they would be hard to restart. Thus it was agreed (and Israel seems inclined to accept) that the demonstrations near the fence will continue, though nonviolently.

An additional obstacle to an arrangement that seems to have been solved is Israel’s refusal to allow the monthly transfer of $15 million in Qatari funding for the salaries of Hamas administration personnel. Egypt promises that the money will be transferred to the civil administration of Hamas and not its military arm, though it’s unclear how it could be overseen, so Israel seems to be leaning toward withdrawing its objection.

Here arises an interesting point. A political source in Hamas claimed in conversation with Al-Monitor that the Oct. 27 report by the News Corporation on Hamas' ultimatum to Israel regarding the funding for salaries came from a partisan leak on the part of opponents of the arrangement in Israel and was not true. “We only said that the agreement could not happen if Qatar’s funding is not transferred to pay salaries,” he explained on condition of anonymity.

In response to the question of who he thinks tried to damage the arrangement in progress, the source argued that there are many parties in Israel who have explicitly said that they oppose a deal with Hamas and prefer war.

Prime Minister Benjamin Netanyahu, who supports the arrangement with Gaza, and its opponents are fighting an open media war. Minister of Defense Avigdor Liberman presents his position at any opportunity, for instance at the Knesset Security and Foreign Affairs Committee, where he told committee members explicitly Oct. 22, “I don’t believe in reaching an arrangement with Hamas. It hasn’t worked, doesn’t work and won’t work in the future.”

On the other hand, a senior political source explained to journalists that the other options are no good, and added that Netanyahu is willing to pay a political price and to wait for the Israel Defense Forces to be asked to enter Gaza and hit Hamas. That was the time Hamas’ “ultimatum” to Israel was leaked to the News Corporation. It seems this report was meant to push Netanyahu into a corner. Netanyahu, for his part, seems determined to advance the arrangement, even at the price of accusations of bowing to terrorism.

“Netanyahu capitulated and was defeated, we won,” said the Hamas political source. “He understood that it’s not worth it for him to start another military operation.” Hamas sees Israeli willingness to give the arrangement a chance as an act of weakness and a public relations victory for the movement, which is in crisis in the Gaza Strip.

Following the announcement from the leadership of Hamas and Islamic Jihad that they are ready to reduce the violence at the border, the two groups started calling on Gaza residents to come to the border with Israel — not to clash with the IDF and break through the fence, but to celebrate the victory that they say they achieved thanks to the demonstrators and with the encouragement of Hamas and other organizations.

The big if is whether the arrangement, which is limited at this stage to six months until the situation in the Palestinian Authority (and Abbas’ position) become clearer, will bring about a renewal of the talks between Israel and Hamas with Egyptian mediation regarding the return of the bodies of soldiers Oron Shaul and Hadar Goldin and the two Israeli civilians held in Gaza. The negotiations are not expected to be easy. Hamas is satisfied in its achievement in breaking the siege and it will not be in a hurry to compromise.

One way or another, the fragile arrangement has many enemies and opponents in Hamas as well. If it fails, it will boomerang back to Netanyahu. Liberman and HaBayit HaYehudi leader Naftali Bennett will certainly be happy to say “we told you so” while Netanyahu’s image as “Mr. Security” cracks. Another weekend of rocket fire on Israel or violent demonstrations at the fence, or the breakdown of the arrangement for any reason, will force him to prove to his political rivals who are ready to pounce that he still stands strong against Hamas.

The question now is whether Hamas and the other Palestinian factions celebrating their achievement understand that it is likely Netanyahu’s final act of defensive restraint, after which could come war in Gaza.