The Qatari emissary asked the Hamas leadership to give him and Israel time to come up with creative ways to transfer the Gaza aid money without causing public opinion in Israel to explode. 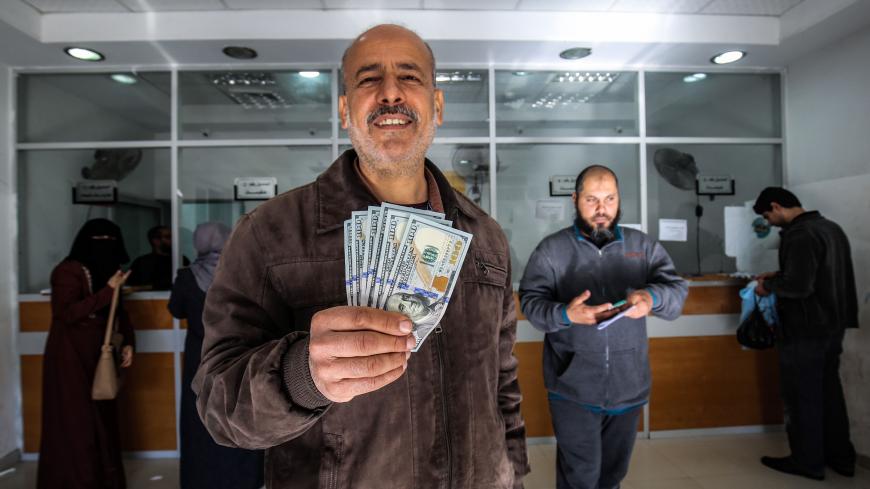 It was entirely foreseeable. The heads of Israel’s defense establishment believe that Qatar’s financial grant to Gaza played a major role in preventing an armed conflict between Israel and Hamas, but now the third installment of that grant is at risk. As of Jan. 8, Israeli Prime Minister Benjamin Netanyahu has given an order that the money is not to be transferred to the Gaza Strip, and Hamas is once again threatening Israel.

Even at the time of the first installment in November 2018, Netanyahu was forced to push back against sharp criticism from members of the coalition and the opposition. They claimed that he had succumbed to Hamas. Minister Naftali Bennett said that Israel was paying “protection money” to a terrorist organization, which endangered Israel. In fact, the Qatari payment was one of the major factors that threatened his government’s stability. Defense Minister Avigdor Liberman left the coalition over it, claiming that Israeli policy with regard to Gaza was too “lax.” Liberman already understood what Netanyahu was trying to suppress: There is no way to argue that Hamas is a terrorist organization, which invests its resources in digging terror tunnels and improving its military capacities, if you transfer suitcases stuffed with money to it through the Erez crossing.

Contrary to the first installment, when the second installment was paid Dec. 6, there were no photos of suitcases stuffed with cash. While this was all part of a plan to moderate public disapproval, it still left a crack in the armor of “Mr. Security" and failed to spare Netanyahu from the anticipated criticism.

Avi Gabbay, chair of the Zionist Camp, which has since broken up, lashed out at Netanyahu’s policies, saying, “Millions of dollars are flowing at the moment via Israel to Hamas — corrupt money [going] into the pockets of terrorists who have been shooting at residents of the south. This corrupt approach can be changed. It has to be changed."

Things have gotten even more complicated since then. Netanyahu appointed himself as defense minister to replace Liberman, he called an early election and is now battling with all his might to prevent the attorney general from indicting him on criminal charges before the upcoming elections in April. On Jan. 7, Netanyahu promised Israelis a “dramatic announcement,” but really seemed rather nervous and scared when he complained about the country’s legal system, and demanded that he be allowed to confront the state witnesses who have given testimony against him. Given all this, it seems highly unlikely that he would be willing to come under further criticism for transferring even half a suitcase of cash to the Gaza Strip.

According to an article in The New Arab Dec. 27, Netanyahu sent a message to Hamas that he wants a long-term cease-fire now, because he advanced the Israeli election. What Hamas wants is Qatari money. Failure to transfer it could lead to an unwanted armed conflict between it and Israel. Then there is the deepening rift between Hamas and the Palestinian Authority (PA), which continues to hover in the background. On Jan. 6, President Mahmoud Abbas ordered PA inspectors to leave the Rafah border crossing between Gaza and Egypt. It was the latest in a series of steps through which he is trying to disassociate his government from the Gaza Strip, which has not been controlled by the PA for over a decade now.

The bottom line is that $15 million were not transferred to Gaza this month. In response, either Hamas or some group acting on its behalf fired a warning rocket at Israel on the night of Jan. 6-7. The rocket was shot down by the Iron Dome missile defense system. This is Hamas’ undiplomatic means of declaring its intent: If there is no money, there will be rockets instead. In response, the Israeli air force bombed “several targets at a Hamas training camp in the northern Gaza Strip.” That is Israel’s way of warning Hamas to avoid any escalation of violence.

Over the last few days, Qatari emissary to Gaza Mohammed al-Emadi asked the Hamas leadership to give him and Israel time to come up with creative ways to transfer the money without causing public opinion in Israel to explode in anger. But it is not that simple. What kind of scrutiny will the money transferred to Hamas really be subject to? And how can Netanyahu’s fingerprints be wiped clean, since they are all over the money? Off the record, the joke now making the rounds in the Israeli civil administration is that the best way to transfer the money to Gaza is through the tunnels. More seriously, while Israel realizes that this money is essential, the way it actually gets to Gaza is a big problem.

In response to criticism, Netanyahu boasted that Israel knows the name of everyone who receives a salary in the Gaza Strip, and that the money would only be used to pay the salaries of people working in the civil service. Qatar even helped out by leaking that $150,000 in unclaimed money was left over from the last installment. In other words, everything is under strict supervision, and not a single cent was transferred to the Hamas war chest.

Israel recently looked into the possibility of transferring the suitcases of money into Gaza through the Rafah border crossing, since that would place the onus of responsibility on Egypt. This would be the best solution, at least as far as Netanyahu is concerned. The problem is Egypt. While it has been pushing for an arrangement and mediating between the two opposing sides, it is hostile to the wealthy Gulf emirate, which has been causing Egyptian President Abdel Fattah al-Sisi all sorts of problems. As such, the Egyptians are absolutely unwilling to allow Qatar into the country, even for this.

An Israeli defense official told Al-Monitor on condition of anonymity, “The Egyptians couldn’t care less if Gaza explodes. All that matters to them is that they have nothing whatsoever to do with the Qataris.”

Israel is also looking into the possibility that the task of transferring the money to Gaza be handed over to the donor nations. The problem is that Qatar is not willing to obscure the money trail. As far as it is concerned, the money is a gift from the Qatari people to the people of Gaza. No credit to Qatar would therefore mean no money for the Gaza Strip.

So, what’s left? There is the possibility of wiring the sum directly to a bank in Gaza, where a Qatari representative would withdraw it and immediately deposit it in the accounts of everyone owed a salary. The problem with this is that the actual money would still need to be transferred physically to Gaza, so that the newly paid employees can withdraw their salaries. Nevertheless, of all the aforementioned options, this is the one favored by Israel.

Meanwhile, the failure to transfer the Qatari money to Gaza immediately could expedite an armed conflict with Hamas. As the source explained, “The money is intended for the people of Gaza. Without salaries or the minimum ability to make purchases, Gaza will collapse. This means more demonstrations along the border fence, more incendiary balloons and perhaps even more rockets.” He went on to claim that so far, Hamas has prevented mass demonstrations along the fence, but that economic pressure could cause Gazans to lose hope and to risk another border war simply because they have no choice.

How patient is Hamas? That’s a question that only they can really answer, though it looks like their patience is already wearing thin. It will likely be gone in a matter of days at the very most.