For Hamas, reconciliation with Egypt worth more than Qatari cash

Qatar financial aid is very important for Hamas, but good relations with neighboring Egypt are essential to its survival. 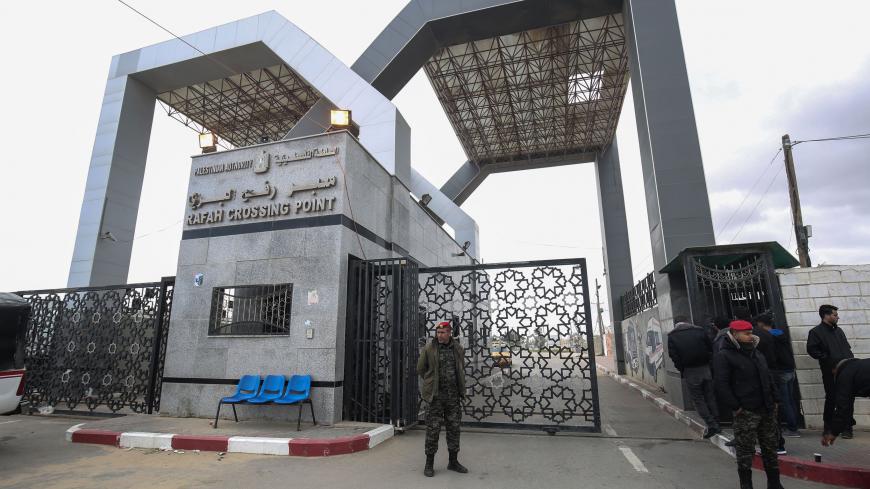 The Rafah border crossing between Egypt and the Gaza Strip will be opened Jan. 29 for two days. It's possible that the Egyptians will extend the period another day or two to reduce the enormous pressure that built up in Gaza after the crossing was closed for three weeks.

Egypt’s decision to close the crossing in early January came after Palestinian observers representing the Palestinian Authority received instructions from President Mahmoud Abbas to abandon their posts and return home. It seemed yet another stage in the escalating conflict between Fatah and Hamas, and that Egypt based the decision to close the crossing on security concerns alone. Only later was it discovered that Egypt had its own interests in shutting down the vital supply route to the Gaza Strip: to punish Hamas.

Al-Monitor has learned from a source in Hamas that the Egyptians were furious about Qatari involvement with Hamas, especially the financial aid. They were angry about the Qataris’ conspicuous foothold in Gaza and the elevation of Qatari envoy Mohammed El-Emadi to the status of veritable emir and savior of the Gaza Strip, and it led to further deterioration in the relationship between Gaza and Cairo.

Egypt is already involved up to its neck in everything pertaining to the arrangement between Israel and Hamas. It played a mediator role in all the armed conflicts between the parties, forcing them to reach cease-fires and preventing them from escalating to full-scale war that would have left Gaza in ruins. At the same time, Egypt has also invested considerable effort into a reconciliation between Fatah and Hamas. So far, it has led nowhere, but Egypt has promised the Hamas leadership in Gaza an unprecedented easing of restrictions, the opening of the Rafah border crossing to trade and an increase in power lines running from Egypt to Gaza. There has even been talk of greater use by Gaza of the Egyptian port in El-Arish.

Then Qatar entered the picture. Gaza became dependent on it and Egypt took a step back. As far as the Egyptians were concerned, Gaza could deal with its own problems if that is what it wanted. The Egyptians were enraged by all the travels of Qatari envoy El-Emadi and the suitcases stuffed with cash he has been hand-delivering to the Gaza Strip since November 2018. Like quite a few Israelis, they saw it as a protection racket paid by Israel to Hamas (by allowing the money to enter the Gaza Strip), but even more as a slap in the face after all of their efforts to help Hamas escape the risks that threatened to bring the regime tumbling down.

Over the last few weeks, Hamas has been asking Egypt to open the border crossing, if only for a few hours, so that residents of Gaza could obtain life-saving medical treatment in various locations around the Arab world. Senior Hamas official Mahmoud al-Zahar warned that economic pressure in the Gaza Strip could result in the renewal of the demonstrations against Israel. Nevertheless, the crossing from Gaza to Egypt remained closed. Hamas even tried to use Norwegian mediators to send a conciliatory message to Egyptian intelligence, along with a promise that the border crossing would operate smoothly and that order would be maintained as long as people were allowed out.

The Hamas leadership slowly realized that Egypt was charging a steep price for allowing Qatari money to enter the Gaza Strip. All efforts by Hamas to explain that it had no choice in the matter got nowhere. It didn’t matter that Gaza was on the verge of collapse or even that the Qatari benefactor was providing this aid for a predetermined and very limited time.

According to a Jan. 10 report in the London-based Al-Araby al-Jadeed newspaper, the Israeli defense establishment intervened in the crisis. It asked Egypt to ease the pressure on Gaza out of fear of an escalation of tensions with Gaza. An Egyptian security source told a reporter for the paper, “Israel is concerned about the strangulation of the Gaza Strip and how the various Palestinian factions will vent their anger against it.” At that point, an Egyptian intelligence delegation led by Gen. Ahmad Abd al-Halaq and his deputy Ayman Badia paid a visit to Gaza. They had already been involved in talks with Ramallah and Tel Aviv and had assessed options to open the border crossing before Israel’s fears were realized.

And so, on Jan. 29, five days after Hamas announced that it would refuse the third installment of Qatari money, the border crossing in Rafah was opened for two days. It is worth noting that the Qatari money will likely be transferred to the United Nations instead, and from there will be used for humanitarian projects in the Gaza Strip.

On Jan. 26, journalist Gal Berger reported for Kan News that that the person behind the decision to halt the transfer of Qatari money to pay Gaza's public servant salaries was senior Hamas official Rawhi Mushtaha. Apparently, he believed that the Qatari money was harmful to the character of Hamas. Palestinian sources also reported that Mushtaha was acting on behalf of Hamas leader in Gaza Yahya Sinwar, who recognized the potential damage to Hamas' image and the strategic damage to Gaza resulting from the loss of Egyptian support. He based his decision to stop the Qatari “cash train” on the assumption that a good neighbor is better than easy Qatari money. According to those same sources, head of Hamas' political bureau Ismail Haniyeh was uneasy about Sinwar’s decision. Al-Monitor also learned that the main reason Hamas has refused to accept the money was a desire to reconcile with Egypt and reduce tensions between the two parties. Qatari money for salaries is certainly important to Hamas, but having Egypt angry and the Rafah border crossing closed is not worth it. Only after Hamas learned that Egypt would be okay with the Qatari money being transferred to about 100,000 needy families in Gaza and the development of employment projects supervised by the United Nations was it decided to redirect the Qatari money.

As far as Egypt is concerned, El-Emadi will no longer hold any status in Gaza, nor will he be considered a savior by the local wage-earners. In contrast, Egypt is back to being a major factor in all decisions by the Hamas leadership.

The Egyptians have a well-known pattern of behavior under similar circumstances. They release pressure slowly while carefully assessing the consequences. The relationship between Gaza and Cairo is still not business as usual and the Rafah border crossing has been opened for a limited time, but it's enough for Hamas to realize that it must not play with fire. Only if it acts in a way that the Egyptians deem proper and recognizes who the most important power in the Middle East really is — who saved it and continues to save it from Israel — will Egypt consider another easing of restrictions to allow Gaza to recover. This knowledge is more important than ever, particularly since it was learned that Abbas accepted the resignation of Palestinian Prime Minister Rami Hamdallah and plans to introduce even tougher sanctions on Gaza. Under these circumstances, Hamas cannot afford to lose Egypt.