Israel, Hamas work quietly together on development projects for Gaza

Though they pretend not to be communicating, top Israeli and Hamas officials are working together via Egypt and other channels to advance development plans for the Gaza Strip. 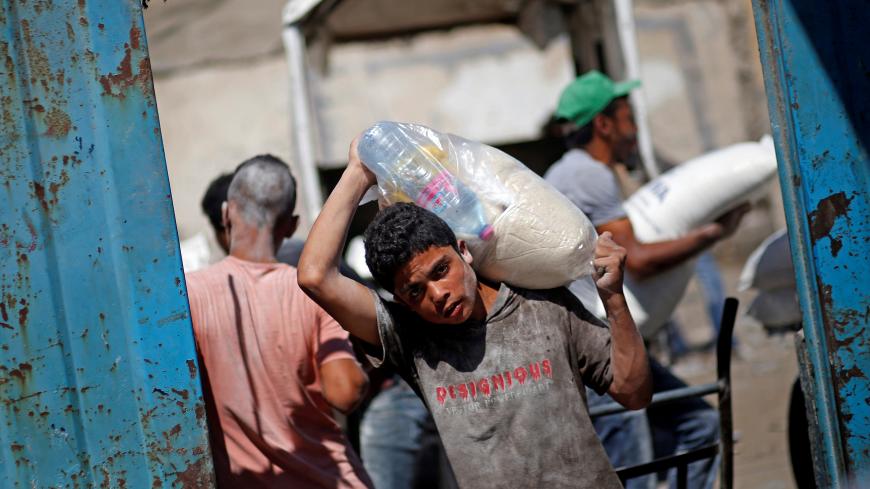 Representatives of the Ad Hoc Liaison Committee for economic aid to the Palestinians convened in New York on Sept. 26 for another round of talks on raising funds for the Palestinian Authority and the Gaza Strip. Prior to the conference, the United Nations issued an emergency report on the state of the PA and demanded immediate action on Gaza's health system, on the verge of collapse. Its top priority is infrastructure development plans for Gaza, most of which Israel has authorized. Some are already being implemented but require additional funding to be completed.

The donor states forum was established after the signing of the Israeli-Palestinian Oslo Accord in 1993. In its initial years and until the end of the second intifada in 2005, the group transferred hundreds of millions of dollars to the PA. The donations kept coming despite the widespread corruption in the PA, since all sides realized that stopping the funds would result in economic and humanitarian disaster. Donors did not always make good on their pledges for certain projects in Gaza or the West Bank, and sometimes the money that did reach its destination was caught up in red tape and not disbursed.

Now, things appear to have changed. Gaza’s humanitarian disaster clock is ticking and the repercussions of the enclave’s collapse are clear to all. The planned projects that have been presented to donor state representatives in New York are based on the emerging arrangement between Israel and Hamas. The deal, which includes a long-term cease-fire and an easing of Israeli restrictions on Gaza, is still in the making, having been delayed for months by Israel’s domestic political entanglement preventing the formation of a new government.

Meanwhile, Qatar is shepherding the projects along. While Egypt mediates between Israel and Hamas on such issues as cease-fires and understandings for a future deal or a long-term truce, the Qataris are helping promote economic works not only by funneling money into planned projects, but also by helping Israel and Hamas exchange messages to implement them.

The contents of these contacts are fascinating. They are not about the timing of a cease-fire, for example, but rather detailed technical plans exchanged between the sides. On one side is Israel’s Coordinator of Government Activities in the Territories (COGAT), Maj. Gen. Kamil Abu Rokon, and on the other, Hamas leader in Gaza Yahya Sinwar.

“No one should be shocked at the fact that each side knows exactly with whom it is dealing on the other side while conducting contacts through a third party,” a Civil Administration security source told Al-Monitor on condition of anonymity. According to the official, projects such as water desalination, rehabilitation of Gaza's water pipelines and sewage system, establishment of industrial zones and upgrading of the power network are being advanced through Israel-Hamas cooperation. Sinwar knows exactly who is behind the plans, and Abu Rokon knows exactly who gives the green light for them to be carried out.

Sinwar, sentenced to life terms for masterminding the abduction and killing of two Israeli soldiers in the late 1980s, was released from prison in the 2011 exchange with Hamas for an Israeli soldier it was holding. He knows Abu Rokon well from his period of incarceration. Abu Rokon also knows Sinwar just as well and is in possession of a psychological profile of him compiled by Israeli intelligence. He knows Sinwar’s weak points and how to deal with him on economic projects to the tune of hundreds of millions of dollars.

This is how it works: Over the past few years, Israel’s Civil Administration has been mapping the Gaza Strip’s most urgent needs to avert economic and humanitarian collapse. The projects cover employment, water, sewage and electricity. The Qataris volunteered to cover most of the cost, with the rest being made up by the donor states, among them the European Union and Norway.

There are no military threats in the Sinwar-Abu Rokon channel, only discussion, for example over the number of Gazans who will be allowed to leave the enclave to work in the new industrial zone being built near Israel’s Erez border crossing, and how they will be transported there. Israel, for example, has demanded that Hamas relocate its roadblocks further from the industrial zone and that its leaders refrain from interfering in the list of those allowed to work there.

According to the Israeli source, Sinwar is deeply involved in the decision-making, conveying his messages to Abu Rokon via the Qatari envoy and receiving replies via same conduit. These days, contacts between the sides are focused on construction of a state-of-the-art water desalination plant in Gaza’s Khan Yunis area. Progress on this multi-billion-dollar project, planned to go into operation in 2020, requires detailed coordination between Israel and Gaza over the movement of heavy equipment and other machinery as well as monitoring and protection of the site. Hamas’ goal is to enable Israel to move projects forward and help raise the required funds for the sake of Gaza’s two million Palestinian residents crushed under the weight of a 12-year siege.