The IDF is recommending relief measures for the Gaza Strip, but with Prime Minister Benjamin Netanyahu indicted and with new Defense Minister Naftali Bennett preparing for elections, there is no one to make the call. 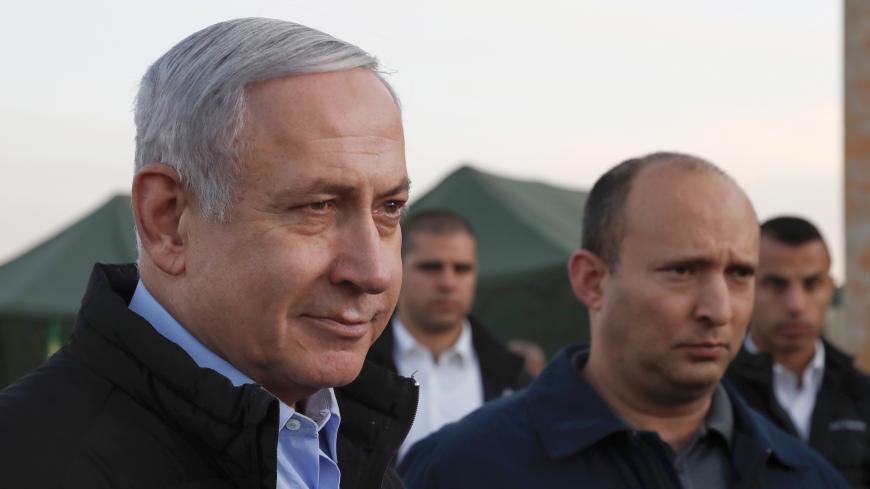 Twelve years have gone by since Hamas overthrew the ruling Fatah movement in Gaza, years during which the conflict with Israel intensified. Now, however, following numerous rounds of fighting, the Hamas leadership appears truly interested in reaching a long-term arrangement with Israel. Israeli security officials identify clear signs that the rulers of the enclave are seeking long-term calm.

The first significant indication was Hamas' decision to sit out the violent clash between Israel and Islamic Jihad following the Nov. 12 killing of its commander in northern Gaza, Bahaa Abu el-Atta. Despite sharp criticism in Gaza, Hamas did not take part in firing hundreds of rockets at Israel.

A second significant indication was the group’s recent cancellation of scheduled protests along the border with Israel, demonstrations that Hamas has sponsored since they began in March 2018 and turned into a major deterrent to Israel. Over the past two weeks, on Hamas' instructions, organizers have scrapped the demonstrations.

The move does not mean the Hamas leadership has concluded that the protests are no longer useful. For the past 18 months, the demonstrations have enabled Hamas to draw unprecedented domestic and global attention to its struggle against Israel, albeit with a large number of casualties. However, Hamas is now convinced that the time has come to ease tensions and move ahead with a deal. Israel’s security agencies have understood the signals and recommended to the political echelons additional easements of Israel’s chokehold on Gaza.

Israel is familiar with the projects that have been proposed to Hamas, through Egyptian mediation, as part of a long-term cease-fire arrangement. They include the development and rehabilitation of infrastructure in the Gaza Strip, additional power lines from Israel to Gaza, water desalination, a regular supply of diesel fuel for Gaza’s power’s station, establishment of a joint industrial park and an immediate and significant increase in the number of labor permits for Gazans seeking work in Israel. The formula is clear: Hamas will halt its violence against Israel in return for eased Israeli restrictions in hopes of ending the 12-year blockade.

Hamas has been keeping its part of the promise. However, Israel is embroiled in an endless political imbroglio and no one seems able to take advantage of the rare opportunity to restore relative calm to residents of the south and at least partially resolve the festering Gaza problem. Prime Minister Benjamin Netanyahu is fighting for his political future and personal freedom. Following his indictments last week, initial signs have emerged within his Likud Party of challenges to his leadership and ability to form a new government. The Knesset is likely to be disbanded in two weeks and Israel will head for its third elections in a year. Netanyahu, as was evident during his two 2019 election campaigns, is unlikely to make any moves that could portray him to his rivals (and supporters) as weak on Hamas. Therefore, any lifting of restrictions on Gaza will have to wait until after Israel’s next elections and the formation of a new government.

Netanyahu, however, is not the only deciding factor. Two weeks ago, just as the clash with Islamic Jihad erupted, a new defense minister took office — the New Right's Naftali Bennett, who took advantage of Netanyahu’s political predicament to snare the job. Implementation of a deal with Hamas would be a dramatic decision for Bennett, who has repeatedly urged far more militant action to resolve the Gaza problem. Can he now change his hawkish views and abandon his militant stand? Just eight months ago, Bennett lambasted Netanyahu, accusing him of failure to deal with Gaza for a whole decade and suggesting that Israel wipe out the Hamas leadership. In July 2018, following the incendiary balloon incidents, then-Education Minister Bennett called for “thorough action” against Gaza. What did he mean? Was he calling for Israel to reoccupy Gaza, as his right-wing colleague Bezalel Smotrich proposed? Bennett did not elaborate, but always implies that he has a solution for the Gaza problem that consists of military strikes rather than deals with Hamas.

Just one year ago, Bennett declared that Israeli soldiers were more afraid of military prosecutors than of Hamas Gaza leader Yahya Sinwar, arguing, “We have created a demon called ‘The Hague’ and we are scaring ourselves over it.” He wanted the Israel Defense Forces to take off their gloves and strike Gaza. Now he is minister of defense, and he too will soon face yet another round of elections. Can he afford to surrender to Hamas? Highly doubtful. He will have a very hard time approving any easing of restrictions on Hamas, even if such a move would convince its leadership that restraint and adherence to the cease-fire are paying off.

The only person who can now advance prospects of a deal with Hamas, even a limited one, appears to be IDF Chief of Staff Lt. Gen. Aviv Kochavi. During Israel’s summer 2014 Operation Protective Edge against Gaza, Kochavi served as head of military intelligence. He knows Hamas well, as well as its leadership and its motivations. He realizes that Sinwar and others in the Hamas leadership are headed for a deal with Israel despite the harsh criticism they have been enduring from hawks within Hamas and elsewhere. Kochavi could, at most, allow the Coordinator of Government Activities in the Territories, Maj. Gen. Kamil Abu-Rukun, to be more flexible in granting work permits to laborers from Gaza and facilitate the regular entry of goods and raw materials into Gaza.

Israel will likely be mired in its political deadlock and paralysis for at least six months to come. Hamas will not wait. On Wednesday night, rockets were launched from Gaza at Sderot again. Given the dire plight of the enclave’s two million Palestinian residents, Sinwar will be unable to withstand the pressure for long. Gaza needs much more than another 100 or 200 work permits.