Why Hamas is renewing the Gaza border protests

In order to appease Palestinian public opinion and show that it is negotiating with Israel from a position of force, Hamas leadership is calling to resume fence demonstrations. 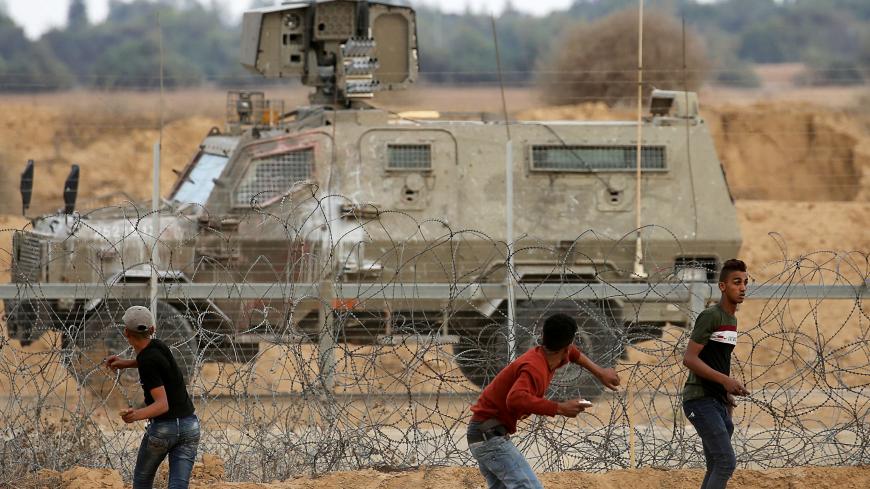 Following a three-week respite, Hamas is planning to renew Friday protests along the Gaza-Israel border starting Dec. 6. At the same time, head of the Hamas political bureau Ismail Haniyeh is in Cairo this week, invited for talks with Egypt’s intelligence services. A Palestinian Islamic Jihad delegation that includes senior officials of its political and military wings as well as its secretary-general, Ziad Al-Nakhalah, who arrived from Lebanon, is also in Cairo. The ongoing talks on an Egyptian-mediated “arrangement” with Israel will be conducted from now on in the presence of representatives of both strong organizations in Gaza, Hamas and Islamic Jihad. A photo of Haniyeh and Nakhalah in Cairo shows them smiling and clutching each other’s hands like long-lost relatives.

The cordial meeting hosted at its headquarters by Egyptian intelligence, which is sponsoring the negotiations over a deal with Israel on Gaza, took place against the backdrop of tensions between the two major Gaza organizations. Following Israel’s Nov. 12 killing of Islamic Jihad northern Gaza commander Bahaa Abu el-Atta, Islamic Jihad retaliated with hundreds of rockets at Israeli targets, but Hamas sat out the brief, violent skirmish. Hamas also scrapped the weekly protests it has been organizing on the Gaza border with Israel since March 2018. Israel interpreted the calm along the border and the Hamas decision to refrain from rocket fire as indications that the group’s leadership was serious about wanting a deal with Israel, despite domestic criticism, and hoped for further progress in the talks that have been going on for over a year.

Although the political crisis in Israel is holding up completion of the deal and its implementation, Israel has taken measures in recent months to ease its blockade of Gaza and build trust with Hamas. For example, it has approved more extensive shipments of raw materials and food into the enclave through its Kerem Shalom crossing. At the same time, preparations are in advanced stages for the installation of power lines from Israel. Israel is even allowing several thousand Gaza residents to work in Israel, most of them on farms and a minority in construction.

So why has Hamas decided to renew the border protests and risk an escalation with Israel even as the deal is taking shape ahead of its completion? Khalil Al-Hayya, the deputy of Hamas Gaza leader Yahya Sinwar, provided the explanation. In a Dec. 3 interview with the Palestinian Al-Youm television station, which is considered close to Islamic Jihad, Hayya was asked about Haniyeh’s talks in Cairo. “We are in negotiations and at the same time we have our finger on the trigger,” he answered. The interviewer did not back off and instead said mockingly, “But the negotiations you are conducting will have a price; you are in fact making economic peace with Israel.” The interviewer’s disparagement and cynicism hit a nerve with Hamas, precisely echoing frequent criticism by the organization at the Palestinian Authority (PA), saying Israel was not offering Palestinian President Mahmoud Abbas a peace deal in return for ceding territories, but rather a humiliating economic peace that has Israel buying off the Palestinians while occupying their lands.

Hamas leaders fear a surge of harsher domestic criticism against them once some sort of deal with Israel is completed and announced. They know they will be accused of selling out Gaza for a pittance and giving up the armed struggle against Israel in return for an agreement of surrender that does not lift Israel’s 12-year siege of the enclave. Their concern is well-founded. The Palestinian media in the PA have been lashing out at Haniyeh’s visit to Cairo, accusing Hamas of not only kicking the Fatah movement out of Gaza in a coup it engineered in 2007 but also of now crawling to Israel to achieve an agreement designed first and foremost to ensure its continued hold on power.

In a bid to fend off the expected criticism, or at least tone it down, Hamas plans to renew the border protests right away. It is hoping to convey the message that any understandings reached with Israel were not born out of weakness or surrender, but rather from a position of strength. Haniyeh, a charismatic and articulate speaker, will presumably know how to portray any understanding and arrangement with Israel as a victory for the “resistance” ("muqawama" in Arabic), proving to the Zionists that the Palestinian people cannot be cowed. However, this is something he will only be able to argue when the Gaza protesters flock to the border fence and clash with Israeli troops. Ultimately, these demonstrations are what led Israel to seriously address the harsh humanitarian reality in Gaza and move toward a deal with Hamas, which has yielded significant relaxation of the embargo.

By renewing the demonstrations, Hamas also seeks to signal Israel in the clearest of fashions that it does not have time for games. The organization wants to push Israel into some form of deal right away in order to obtain further relief from the siege. If Israel keeps dragging its feet, the relative calm along the border will be disrupted and demonstrators will head for the fence.

Absent an Israeli government that can make weighty decisions as long as it is in caretaker mode, completion of a so-called “arrangement” between Hamas and Islamic Jihad with Israel appears far away. That is why the Hamas leadership has changed its terminology, and instead of talking about an “arrangement” it is now referring to the deal as “a long-term cease-fire.”

In his interview with Palestine Al-Youm, Hayya insisted there would not be any deal unless Israel agreed to a maritime passage for Gaza. That was also the message conveyed to Egypt and to UN Middle East envoy Nickolay Mladenov. At this point, Israel is unable to promise a thing, as previously mentioned. A security source who spoke to Al-Monitor on condition of anonymity said Hamas “realizes that before talking about a seaport or anything significant in terms of lifting the Israeli blockade, trust has to be built between the sides.” That can only happen after an extended period of calm and adherence to agreements by both sides.

The phrase “long-term cease-fire” could be publicly acceptable in Israel even during the country’s seemingly endless election cycles — just as long as calm is preserved in Gaza and Israel. That is, in fact, the current situation: a cease-fire with a finger on the trigger and negotiations at the same time. For now, nothing more can be achieved.