Prime Minister Benjamin Netanyahu needs quiet on the Gaza Strip, but fears saying publicly that he’s in favor of an arrangement with Hamas. 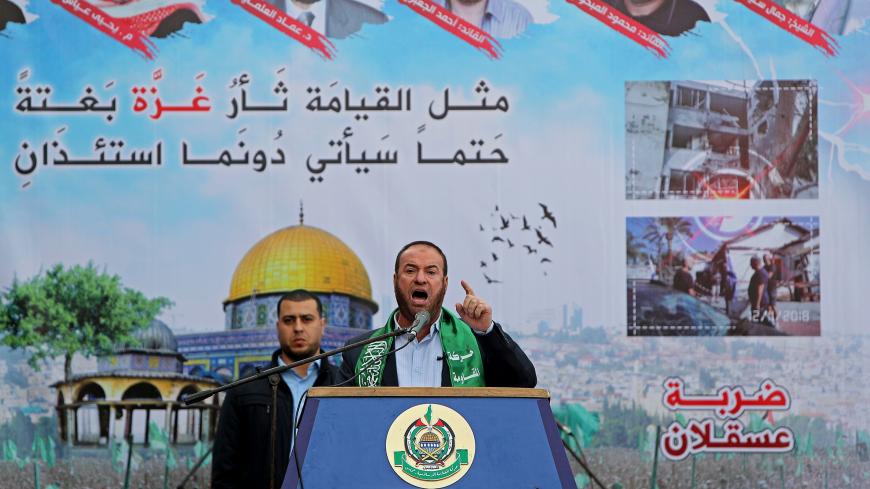 Israel’s security Cabinet discussed a long-term arrangement with Hamas Dec. 29, just four days after Prime Minister Benjamin Netanyahu was publicly embarrassed by a rocket launched from the Gaza Strip disrupting his political rally in the town of Ashkelon. To the sounds of the blaring siren warning of an incoming rocket, Netanyahu’s bodyguards hustled him offstage Dec. 25 and took him to a sheltered area, in an incident eerily reminiscent of a rocket launch in September during a Netanyahu election rally in the nearby town of Ashdod. The September rocket did not appear to have any logical reason other than, perhaps, arrogance on the part of Islamic Jihad or its desire to boost morale within the ranks.

The unprovoked September rocket led Israeli defense officials to wonder whether the long-term deal under discussion with Hamas was truly the best default option for dealing with the Gaza problem. Would easing the blockade of the Gaza Strip and granting some relief to its residents guarantee an end to the festering violence against Israeli border communities?

Smarting from that embarrassing incident, and against the advice of top defense officials, Netanyahu seriously considered sending ground troops into Gaza in September to deal with the problem “once and for all.” Netanyahu’s national security adviser Meir Ben-Shabat even advised the chair of the Central Elections Committee, Justice Hanan Melcer, to prepare for a possible delay of the scheduled Sept. 17 elections if war breaks out in the south. At the same time, panicked Hamas leaders conveyed urgent messages to Israel through the heads of Egyptian intelligence, claiming they had not been responsible for the attack and accusing the Islamic Jihad commander of northern Gaza, Bahaa Abu el-Atta, of responsibility for embarrassing Netanyahu with a single rocket and provoking Hamas. Israel accepted the explanation, more or less, and drew conclusions from the incident.

Two months later, on Nov. 12, Israel killed the “rogue” Atta. Islamic Jihad responded with hundreds of rockets fired at Israel, but Hamas did not join in, despite the criticism it endured. The Israeli military concluded that the Hamas leadership was eager for a long-term deal, and approved wide-ranging relief measures for the Palestinians in order to move negotiations ahead.

Then came last week’s repeat performance. Netanyahu’s bodyguards once again rushed him offstage — with his wife Sara — to the sounds of warning sirens, prompting renewed embarrassment. The rogue militias in Gaza very likely cheered as they watched footage showing a humiliated “Mr. Security” being led to a safe room to escape one single rocket they had proudly launched. When the prime minister returned to address the rally, he told his supporters, "The one who tried to make an impression the last time is no longer with us, and the one who tried to make an impression now should start packing …” He was obviously referring to Atta’s assassination, but apparently failed to realize the paradox. Atta’s killing of which he boasted had failed to restore calm to the area, and the "rogue" factions were continuing to embarrass him unhindered.

Meanwhile, the September ritual was replayed. Hamas once again conveyed messages to Egypt denying responsibility for the rocket, blaming Islamic Jihad and pledging to deal firmly with the organization — anything to ensure the wheels of the long-term arrangement with Israel keep rolling. And, indeed, just a few days after the launch at Ashkelon, the security Cabinet convened to discuss the arrangement deal with Hamas.

What happened to the determination Netanyahu displayed in September to order a ground offensive on Gaza, and why did he not order a major response to last week’s Ashkelon rocket? The answer is simple: His indictment is tying his hands, he is mulling whether to request Knesset immunity from prosecution and the polls are not predicting a victory in the March 2, 2020, elections.

In fact, he has to choose between ignoring the whole thing as if it had not happened or going to war with the Gaza Strip. He knows that the second option will not strengthen his “Mr. Security” image — people would think that he is launching war only to escape dealing with his indictment. Netanyahu realizes that for the sake of dealing with his own legal problems, he needs quiet on the southern front. This way he would be free to campaign at the Knesset, claiming that he is being persecuted and that he should be awarded immunity.

My colleague Ben Caspit suggested in a Dec. 31 Al-Monitor article that Israel and Hamas will not reach a historic agreement and that the recent support Netanyahu and top security officials expressed for an arrangement with Hamas was linked to the Iranian-related unrest on Israel’s northern front. Nonetheless, Defense Minister Naftali Bennett and Netanyahu are aware of the strenuous public objections to relaxing restrictions on Gaza’s 2 million Palestinians as long as Hamas refuses to hand back the bodies of two Israeli soldiers, Oron Shaul and Hadar Goldin (killed in 2014). Facing this dilemma, Netanyahu and Bennett found a creative solution. Members of the security Cabinet approved a dramatic decision, against the advice of security agencies, designed to steer public and media attention away from the problematic deal with Hamas. The ministers agreed to withhold 150 million Israeli shekels ($43.4 million) from the tax money Israel collects for the Palestinian Authority (PA). In other words, motivated by political considerations only, Netanyahu and Bennett linked the arrangement that should benefit Hamas, with the tax deduction that harms the PA. Thus, Israeli public opinion was drawn to the deduction issue, rather than the advancement of the Hamas arrangement.

Israel is once again digging itself into a hole. Its previous decision to withhold funds from the PA to punish it for supporting terrorists led the PA to the verge of collapse. Israel had to beg it in October to accept a compromise suggested by Finance Minister Moshe Kahlon. Now Israel has resurfaced that same issue. This, however, is not the only problem. The Dec. 30 Cabinet session ended inconclusively in terms of the Hamas deal. On Jan. 1, the Cabinet convened again, but as expected also this time no decisions were made. Netanyahu is busy with requesting the Knesset for immunity, so his attention is really not on the Gaza Strip.

Netanyahu and Bennett will continue to drag out the contacts with Hamas as long as they can, promising its leaders through Egyptian mediation that the deal is moving in the right direction and that the pending issues are being seriously considered. Hamas, meanwhile, has decided on a three-month suspension of its weekly protests along the border with Israel, which often deteriorate into violent clashes, in order to provide Israel with a respite and allow it to make the “right decisions.”

Hamas leaders Yahya Sinwar and Ismail Haniyeh, as well as the heads of the organization’s military wing, presumably realize that a deal with Israel will be a long time coming. Netanyahu under criminal indictment and Bennett who has lost his voters cannot afford to appear weak on Hamas before the elections. That only leaves an interim solution — relief and more relief and more relief for Gaza until after the Israeli elections, just as long as calm is maintained. What kind of relief is under discussion? For example, allowing thousands of Gaza residents to work in Israel.

It will be interesting to see whether Sinwar and Haniyeh hand Netanyahu and Bennett the election gift they covet — calm on the southern front.