The Israeli security system has come to the conclusion that the escalation of the past few days on the Gaza border means one thing: It is now the Hamas military wing that is calling the shots, not the Hamas political leadership. 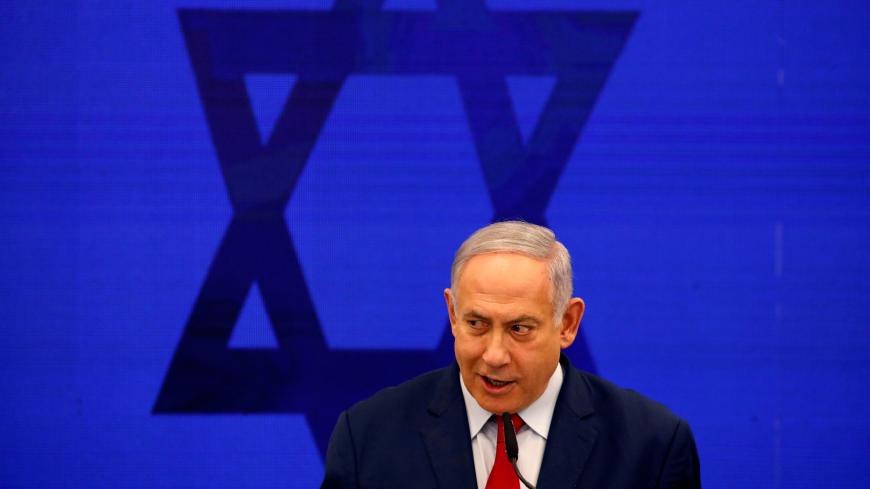 Israeli media dealt extensively this week with the great embarrassment Hamas caused Prime Minister Benjamin Netanyahu when sirens warning of incoming rockets pierced the air as he addressed a packed election rally Sept. 10 in the city of Ashdod. His bodyguards immediately hustled him off the stage and took him to a sheltered area, even as “Mr. Security” Netanyahu asked, in reference to the audience cheering him, “And where are they supposed to go?” Several minutes later he returned to the stage and resumed his speech. He later wrote on Facebook: “Tremendous support in Ashdod. Vote Likud to prevent a government of the left and the Arabs!” The entire embarrassing incident was aired live on his Facebook page, but was subsequently deleted.

After the event, Netanyahu convened the heads of the nation’s security agencies at the Defense Ministry in Tel Aviv, and his office distributed a  photo of the meeting. After all, an unprovoked rocket attack on Ashdod for no discernible reason during a Netanyahu election rally in town merits photographic evidence proving to the public that all is well — a type of response to the seeming victory photo that Hamas engineered. The segment showing Netanyahu being whisked off stage was aired repeatedly on Hamas television channels, with the presenters grinning widely.

At issue, however, is not the embarrassment to Netanyahu, but rather Hamas’ daring. In Israel there were those who wondered whether Hamas was willing to sacrifice everything, meaning to risk a powerful Israeli response that could drag both sides into a broad, bloody military clash just for the sake of a single victory photo. Could the Hamas leadership have been thinking — as was the case prior to the April elections — that Netanyahu would not dare launch an all-out offensive on Gaza ahead of the Sept. 17 elections that could harm his reelection prospects?

Indeed, in March, Hamas launched hundreds of rockets at Israel in a bid to wrest an easing of restrictions on Gaza, assessing that Netanyahu’s hands would be tied on the eve of elections. The political leadership — Yahya Sinwar, Ismail Haniyeh and others —believed that only pressure would force Israel to relax its chokehold on the enclave. With such backing, the gung-ho military wing was eager to join in as was the Islamic Jihad with its arsenal of long-range rockets. And so the rockets were fired, come what may, but Israel did not violate the rules of the game.

The two long-range rockets fired from Gaza at the southern coastal cities of Ashkelon and Ashdod this week, both intercepted by Israel’s anti-missile Iron Dome system, are a completely different case. They were launched just two days after a Sept. 8 visit to Gaza by Egyptian security officials for meetings with the Hamas and Islamic Jihad leaderships to discuss the understandings the Egyptians have been mediating between Gaza and Israel. The Islamic Jihad has become an almost full partner in decision-making in Gaza since the latest Hamas-Tehran rapprochement.

At the meeting with the Egyptians, participants discussed options for calming tensions with Israel and potentially significant Israeli concessions after the elections. At this stage, Hamas does not want to break the rules, and indeed, after the two rockets were fired on Sept. 10, it conveyed a message to Israel through the Egyptians denying responsibility for the attacks. Israel is highly doubtful about the denial, pointing out that only Hamas and the Islamic Jihad have rockets that can reach Ashdod, and only Hamas has full control of the territory and must have known about the attack.

A security source tells Al-Monitor on condition of anonymity that nonetheless, the rockets could have been fired under the nose of Hamas in defiance of its leadership. Several hours earlier, an Israeli army drone was downed over southern Gaza, but the military is convinced the attack on Ashdod and Ashkelon was not retaliation for the use of the drone but rather a decision by the heads of the Hamas military wing to boost the morale of its people. However, the rockets also embarrassed the Hamas political leadership at least as much as Netanyahu.

The emergency consultation Netanyahu convened with the heads of Israel’s security agencies was not designed to make any dramatic decisions but to show that “Mr. Security” does not take being embarrassed lying down. Also, the participants talked about Hamas losing control of the enclave. This time there was no discussion of “rogue” activists who had left the organization to join more radical Salafi groups against Israel or of those who had launched individual attacks against Israel after being disillusioned with the “moderate” line taken by Hamas. This time the discussion focused on a deeper issue — the relationship between the political and military wings of the Islamist organization and the arm wrestling between them.

“This is a watershed moment that set off alarm bells within the security agencies,” the security source told Al-Monitor. Although Hamas insists it is sovereign in Gaza and maintains strict organizational discipline, the heads of the armed wing are doing whatever they feel like, the source added. The source indicated that they do not employ any judgment and that not only do they go against the organization’s line, they are willing to sacrifice the lives of Gaza’s residents without blinking.

The source said that after the rocket launches, the Egyptians also realized whom they were dealing with. After all their efforts and talks with Sinwar and Haniyeh, all the messages they conveyed to Israel, the comprehensive plans to improve the Gaza economy and relax restrictions at the border crossings — key activists in the Hamas armed wing come along and prove to everyone who really calls the shots in Gaza.

Israel’s response to the rockets was slightly harsher than its usual dose. The army spokesperson said 15 “terror targets” were attacked, among them a tunnel that Hamas planned to make operational, but Israel was still very careful not to trigger an escalation and not to harm Hamas operatives. Netanyahu is obviously not interested in risking an escalation that could disrupt next week’s elections.

While Israel can keep talking with Egypt and Hamas about understandings and long-term ceasefire and other arrangements, there will always be concern that the armed wing will thumb its nose at the political leadership and seek to prove who is in charge — even if the enclave’s residents end up paying the price with their lives.

Indeed, statements by Netanyahu himself Sept. 12 reaffirmed the new assessments espoused by the security system following the recent firing of the two rockets. Speaking just five days before the Sept. 17 election, Netanyahu said in an interview with the Reshet Bet Kan radio station that Israel might not have a choice but to embark on a large campaign for toppling the Hamas regime in Gaza. Netanyahu further explained the assessments forged by the security tops, saying, "We have a basic situation of a terror group that has taken over and launches rockets, that doesn't control errant factions even when it wants to. Hamas understands where they are headed, but can't stop. Because they can't, there will be no choice but to enter a war."