Although the party behind recent missile attacks remains unclear, Israel held Hamas at least partially responsible and directed its military retaliation at the Islamist group. 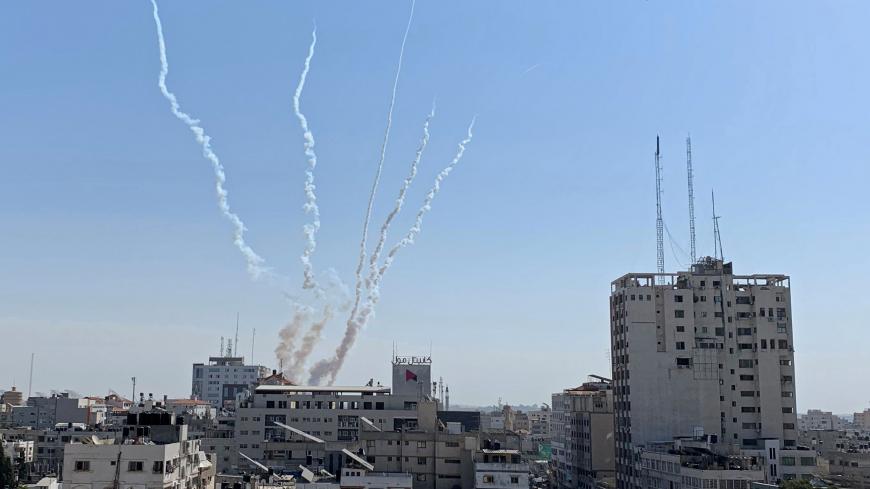 Trails of smoke are seen as rockets are fired toward Israel from Gaza, Nov. 14, 2019. - REUTERS/Suhaib Salem

On Jan. 15, sirens blared in Israel’s Gaza border communities, alerting residents to incoming rockets from Gaza. Israel’s anti-missile Iron Dome system intercepted two of them and another two fell in open spaces without inflicting casualties or causing damage. In response, Israeli air force jets bombed Hamas targets in the northern Gaza Strip in a raid described in Gaza as the heaviest since the November 2019 clash that followed Israel’s killing of a senior Islamic Jihad commander, Baha Abu al-Atta.

Israel believes the rockets were launched by rogue Islamic Jihad militants, but directed its military retaliation at Hamas. The military said it held Hamas responsible, as ruler of the Strip, for all violence emanating from the enclave. The Israel Defense Forces (IDF) are gearing up for additional rockets, and Iron Dome batteries have been deployed in the south.

The previous rocket attacks from Gaza occurred Dec. 25, as Prime Minister Benjamin Netanyahu addressed a political rally in the southern town of Ashkelon. Netanyahu, who was spirited off stage by his bodyguards when the sirens sounded, told his followers once he was allowed to return to the stage: “Hamas and Jihad don’t want me to win.” He then advised whoever was responsible for the rocket launch to pack his bags, adding that the person behind a similar attack designed to embarrass him during a September 2019 political rally in the nearby town of Ashdod had since met his maker — referring apparently to the Atta assassination.

Following the launch at Ashkelon in December, Hamas conveyed a message to Israel via Egypt, saying the firing had been carried out by rogue Islamic Jihad activists and promising to take appropriate action so that such “missteps” would not recur. Netanyahu, perhaps because he had no other choice, accepted the explanation to avoid undermining Egyptian-mediated efforts to forge a long-term Hamas-Israel deal, and hoped for the best.

But the Hamas pledge of calm lasted only three weeks, until Jan. 15. The IDF’s response — a raid on Hamas targets — stemmed not only from its strategy of holding Hamas responsible for events in Gaza as the enclave’s sovereign power, but also from an assessment that the Hamas military wing was somehow complicit in the launches — whether by turning a blind eye to them (at best) or being involved (in a worst-case scenario).

All Hamas promises to prevent attacks on Israeli targets do not hold water for long. After every launch, the organization comes up with an excuse to mitigate its responsibility. At times, it blames rogue Islamic Jihad activists. At other times, it claims the economic crisis in Gaza pushed its armed wing to attack Israel to “convince” it to ease the 12-year blockade of Gaza. In October 2019, Hamas even blamed a rocket launch at the town of Beersheba on a lightning strike that triggered the launcher.

After each incident, the Egyptians were the ones who mediated between Israel, Hamas and the Islamic Jihad on a cease-fire, or conveyed messages back and forth to avoid further escalation and possible war in the south. However, Egypt did not intervene following the four Jan. 15 launches, and Israel even believes the attack resulted from Egypt’s pressure on Hamas over the surprising visit of its leader Ismail Haniyeh to Tehran.

Head of Hamas political bureau Haniyeh landed in Tehran Jan. 3 — in blatant disregard of Egypt’s advice to avoid visiting there — to take part in the funeral of Islamic Revolutionary Guard Corps commander Gen. Qasem Soleimani. As I previously reported, Egypt was expected to respond. Indeed, Egypt was so furious that it immediately turned off its supply of cooking gas for the Strip’s 2 million residents to signal the heads of the organization that Haniyeh’s provocative step would not go unpunished. Over the past week, the Egyptians have clamped down on the movement of goods and people through its Rafah border crossing with Gaza. No one knows what might happen once Haniyeh asks to return to the Strip and whether Egypt will let him through.

Egypt’s pressure on Gaza is clearly felt, and two residents of the town of Khan Yunis described growing criticism of Hamas in a conversation with Al-Monitor this week. “We are no longer afraid to say what people think about them [Hamas leadership] and the situation to which they have led Gaza,” one of them said, speaking on condition of anonymity. “The protest is massive, we’re not talking about a small group. Hamas used to arrest anyone who opened his mouth against them, but today everyone is criticizing and cursing. What, Hamas is going to arrest them all? Shoot at our legs?”

The other Khan Yunis resident said people do not understand why Hamas had turned its back on Egypt and chose Iran. “What do we have in common with them?” he asked in anger.

At this stage, it is hard to gauge the extent of the protest in Gaza, but Israel believes the Hamas leadership is greatly concerned by growing Egyptian pressure on the enclave. Whether Hamas armed-wing activists took part in the latest rocket attack or simply turned a blind eye to them, Egypt is no longer going out of its way to avert an Israel-Hamas escalation, as a result of Haniyeh’s visit to Tehran.

As mentioned, the Egyptians had not spared any effort to prevent a military deterioration with Gaza, playing a key role in defusing tensions with Israel, even if this occasionally entailed compromises on their part, such as welcoming the Islamic Jihad leadership to Cairo in October 2019 despite Iran’s declared support for the Islamist organization. Egyptian intelligence delegations, led by deputy intelligence chief Ayman Badiyeh, are frequent visitors to Gaza, not only in times of escalation but also for talks on a long-term deal with Israel. An Israeli security source said the Egyptians are also seeking a high profile in the Strip to signal to the Hamas leadership that Egypt has a vested interest there and was keeping its eye on the organization. This tactic worked, up until Haniyeh’s unexpected visit to Iran.

Is it all over? At this stage, Egypt appears interested in ratcheting up tensions with Hamas, until it is convinced Hamas has received the message of deterrence and its leadership has learned a lesson from its mistake. The troubling question is whether Egypt will intervene if the rocket launches continue.