Is West Bank, Gaza unrest a prelude of things to come?

Attacks on Israeli security forces in the West Bank and Jerusalem after the release of President Donald Trump's peace plan have led security officials to view a recent escalation on the Gaza border in a new light. 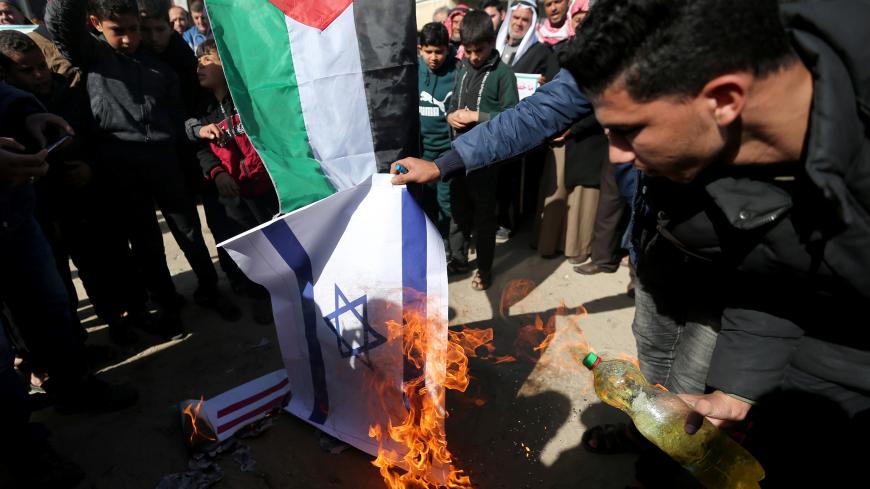 Palestinian demonstrators burn a representation of an Israeli flag during a protest against the US President Donald Trump's peace plan, southern Gaza Strip, Jan. 31, 2020.

Israel experienced two shootings and a car-ramming incident against its security forces on the West Bank and in Jerusalem on Feb. 6. With officials viewing the attacks as spontaneous reactions by Palestinians to the unveiling of President Donald Trump’s peace plan, the military began to take more seriously a recent gradual escalation on the Gaza border that had until now generated little attention in Israel.

In fact, for the past two weeks, several explosive devices attached to balloons have been launched from Gaza into Israel, as have rockets and artillery shells. Israel treated the latest escalation with a certain equanimity, regarding it as no different from the daily routine that residents of Israel’s southern communities and the Israel Defense Forces (IDF) have had to contend with for years. Accordingly, the IDF’s response had been relatively minor. Air strikes on what the military described as “Hamas targets” were carried out with precision to avoid hitting armed militants or civilians in Gaza. The attacks were meant to avert further escalation at a time of unprecedented political chaos in Israel and the run-up to the March 2 elections.

Defense Minister Naftali Bennett, who prior to his appointment in September had been a vocal proponent of harsh measures against Gaza, had been making do with tweets advocating the annexation of the West Bank, for which the Trump plan provides, as a sop to his right-wing voters. As for the IDF, he let it continue with its ineffective and non-deterrent responses of the past years. On Feb. 6, however, Bennett suddenly equated the attacks on soldiers in the West Bank and Jerusalem with the escalation in Gaza, suggesting that both stemmed from Trump's “deal of the century” unveiled on Jan. 28.

According to a statement issued by Bennett's office, the IDF will step up readiness on the West Bank and respond to attacks from Gaza. Bennett ignored the fact that his own declarations championing annexation of West Bank lands are more responsible than ever for the escalation given his position as defense minister.

IDF chief of staff Lt. Gen. Aviv Kochavi, who conducted a security assessment at the Etzion divisional headquarters near Bethlehem following the uptick in violence, also linked events in the two arenas. “We have no intention of allowing terror to prevail,” Kochavi said. “The directive is very clear to those on the ground … to thwart and prevent all [terror] activity. When I say terror, I’m also referring to stones, firebombs, arson balloons — they are all terror. The IDF is focused on the Palestinian arena in recent weeks, and we will respond sharply and clearly to all these events.”

Israeli media lumped the attacks together under the basic headline “Security escalation since the deal of the century.” The IDF is experienced in handling waves of organized or popular Palestinian terrorism in the West Bank and has also drafted detailed contingency plans to address scenarios such as a collapse of the Palestinian Authority and the subsequent eruption of terrorism.

Some official assessments compiled over the past year suggest the Palestinians are exhausted and have lost all faith in the leadership of President Mahmoud Abbas and are therefore unlikely to heed calls by his Fatah movement to rebel. Israeli defense officials are nonetheless taking seriously the comments attributed to Abbas at a Jan. 27 closed-door meeting of Fatah heads: “We need an escalation of popular resistance on all fronts and mobilization of all the youth. Not to leave the street. We will stand united in the coming days and we must monitor the positions of Hamas and Islamic Jihad. We will be on emergency footing in the coming days and invite everyone to come to us. We need everyone.”

An Israeli security source who spoke to Al-Monitor on the condition of anonymity believes the comments were leaked to send a message to the Palestinian public that their leader is waging war against “Trump’s plan of humiliation” and to show Israel that it might pay a heavy price for any unilateral annexation measures.

The rockets, shells and balloons from Gaza, however, started well before Jan. 28. Indeed, Israel’s various defense agencies recognize that the two arenas are different. The escalation from Gaza did not arise from the Trump plan, controversial as it may be. Rather, it is the result of Hamas' weakened control over the territory. The situation in Gaza is complex and requires responses other than bombing this or that target in the enclave, which will not effectuate change and appears aimed primarily at pleasing Israeli public opinion and calming the beleaguered residents of southern communities cowering in shelters.

The election process of Hamas' Shura Council to elect a new leadership for the movement began this month. When it ends several months from now, depending on the results and developments, the movement’s leader will be announced. The incumbent, Ismail Haniyeh, has not returned to Gaza since leaving in December 2019, fearful that the Egyptians will not let him in to “punish” him for defying their orders and paying his condolences in person in Tehran following the assassination of Iranian Gen. Qasem Soleimani.

Hamas elections always generate division and power struggles. This time, however, the process will be particularly tense and emotional given the backdrop of ongoing negotiations to reach a long-term cease-fire arrangement with Israel. The Egyptian-mediated talks are stuck, and no one knows when and if progress will be made. Another cause for tensions within Hamas involves the movement’s rapprochement with Iran and its distancing from Egypt.

Many believe Hamas is a well-oiled organization, marked by consensual, orderly decision-making. In fact, Hamas is like any other political movement, beset by power struggles, internal strife and the desire of various members to impress their constituencies. When tensions divide the leadership, control of the rank and file slips. That is particularly true when no Hamas political leader wants to be perceived as pragmatic or, heaven forbid, weak or surrendering.

Hamas Gaza chief Yahya Sinwar is perceived as a key proponent of a deal with Israel, but he is being forced to toe the line of the hawks calling for escalation of the “popular struggle” as well as armed struggle. In other words, Hamas is giving the go-ahead for renewed protests along the border fence with Israel and for more incendiary balloon launches, rocket firings and shelling of Israel’s border communities. It is also not ruling out the possible firing of long-range missiles at towns farther from the border, such as Ashdod, Ashkelon and Beersheba. Things depend, of course, on the nature of Israel’s response.

The IDF has so far been restrained in light of Israel currently being run by an interim government that lacks a coherent policy on Gaza and cannot take responsibility for a broader offensive, should Israel get dragged into one. Should Netanyahu, Bennett or Kochavi insist on equating events in Gaza with those in the West Bank, however, Israel might be dragged deeper into the Palestinian arena and find itself engaged on two fronts at the same time, with unforeseen consequences.