Defense Minister Naftali Bennett has made many belligerent statements over the years about stronger military action in Gaza, but as defense minister he seems to have adopted a policy of restraint. 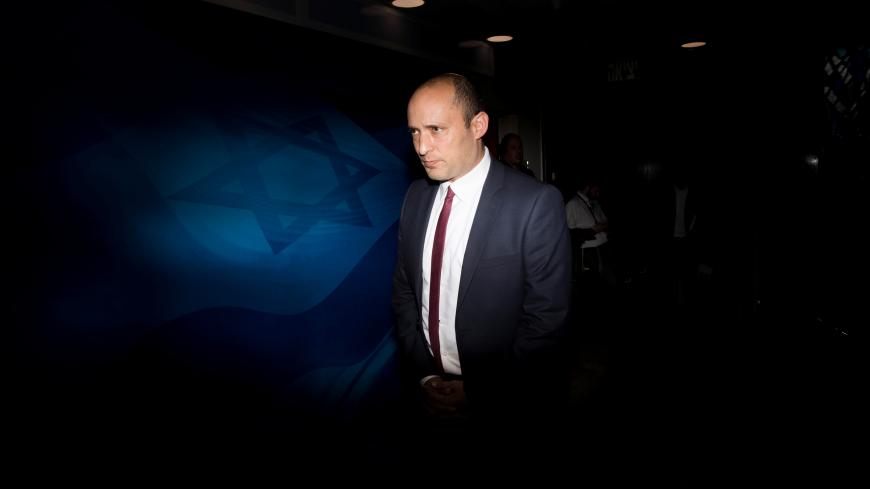 Last weekend, the Israel Defense Forces faced the unusual situation of all its fronts being challenged simultaneously. On the night of Feb. 6, the Syrian media reported a missile assault on western Damascus targets that caused numerous deaths and wounded many people. In the aftermath, the wave of violence that has flooded Israel and the Palestinian territories ever since the Jan. 28 announcement of US President Donald Trump’s “deal of the century” and the annexation declarations has also escalated. Prime Minister Benjamin Netanyahu backing down from annexing West Bank territories before the March 2 elections did little to curb the violence.

In addition to these worrisome signs, the region lacks the strong leadership needed to calm the territory. Netanyahu is occupied by the upcoming crucial elections, the Israeli cabinet is barely functioning, Palestinian President Mahmoud Abbas is in the twilight of his rulership and more worried about his legacy than the current situation. Thus, the few remaining stabilizing agents of the region face serious challenges.

The violence that erupted in the territories is not officially sanctioned or organized, but enjoys significant support from the Palestinian Authority leadership in Ramallah. Abbas, despite his statements and threats, has not yet put an end to security cooperation with Israel but personally instructed his security apparatus not to hold back the masses that want to protest the American/Israeli plan, which in Abbas’ words is intended to "liquidate the Palestinian national project." In the days that have since passed, many acts of violence by Palestinian assailants have been reported. There has been one vehicular attack in Jerusalem in which 12 Golani soldiers were wounded, an attempted shooting of an Israeli border police officer and an attempted shooting of IDF troops as well as the hurling of stones and Molotov cocktails at Israel’s security forces all over the country.

Simultaneously, explosive balloon attacks from Gaza have intensified and at least five rockets were launched from the Strip at Israel. The balloons, once viewed as a nuisance, have become a growing threat, traversing longer distances into Israel and carrying bigger explosive charges.

But except for the Israeli-Iranian front in Syrian territory, Israel has maintained impressive restraint. Defense Minister Naftali Bennett threatens Hamas, but his words are empty. His actions support Netanyahu's efforts to advance an arrangement with Hamas. At the same time, the IDF is trying hard to contain the violence in the West Bank. The military made a major mistake when it entered the West Bank city of Jenin on Feb. 6 to demolish the home of a Palestinian attacker with a court order to do so. The operation became a battle that continued all night, and there were at least two Palestinian deaths. Israeli military sources have admitted to Al-Monitor that the demolition should have been postponed until quieter days. The West Bank is beginning to burn.

“There is still not enough energy for another intifada or a significant round of violence,” a senior Israeli security official told Al-Monitor on condition of anonymity. “But when Abbas tells his people to go out and protest on the streets, they do what he says.” According to the source, the IDF mistakenly killing a Palestinian policeman in Jenin stirred things up even more. The IDF took several steps back in order to let the hostile winds die down and so far, things have not escalated further as of the beginning of this week. Israeli declarations regarding annexation have also died down.

Bennett is in a bind. Not long ago, before being nominated minister of defense, he criticized strongly Netanyahu in his role as defense minister for the IDF's alleged weakness vis-à-vis the Gaza Strip. Bennett demanded real action against Hamas, but his vociferous declarations meant little. Bennett had also attacked Avigdor Liberman when Liberman served as defense minister with the same holy fire regarding the need to restore Israel’s deterrence and uproot terror. Liberman had also criticized his predecessor Moshe Ya’alon for the same inaction. But at least Liberman was honest enough to quit the job when it became clear to him that he was incapable of implementing his Gaza policy.

Now Bennett has reached the same place as his predecessors. His close associates such as Yamina Knesset member Matan Kahana are spreading the word that Bennett is considering military action. “Bennett, [IDF Chief Aviv] Kochavi and the rest of the defense forces are considering a significant military operation … but it will take place when the time is right,” Kahana told Radio 103FM Live on Feb. 6, but gave no additional details.

The truth is complicated: Bennett is now paying the price for his bluster, along the lines of the well-known Israeli dictum, “Things that you see from here, you don't see from there.” In other words, when one reaches the position of defense minister, one will understand that the reality is more complicated than it seems, and that launching military attacks must be considered in view of many different elements. Thus, Bennett is giving Netanyahu space to continue the arrangement process with Hamas. He realizes that a flare-up against Hamas now may torpedo annexation work and interfere with Israel’s continued efforts against the Iranian bases in Syria. For example, a recent assault (for which Israel did not claim responsibility) took place in Damascus that forced a civilian flight approaching the Syrian capital’s international airport to take evasive maneuvers to avoid being harmed by Syria's aerial defense while the skies of Damascus were filled with dozens of ground-to-air missiles. The Russians furiously denounced the incident and Israel is trying to keep a low profile.

Therefore, Bennett will be forced to wait patiently with his plans to bring down Hamas, such as smashing the movement in a long-range aerial campaign while evacuating sections of the Israeli population living close to the Gaza fence.

At the moment, Israel is trying to assist Hamas so that one of Israel’s most problematic fronts will maintain a certain level of calm on the eve of elections. But, in truth, this irritating front is a non-issue when compared to the IDF’s other enemies in the new and complex post-Arab Spring Middle East reality.