How long can Abbas hold firm on security coordination with Israel?

Israel's security establishment is well aware of the pressure being exerted on Palestinian President Mahmoud Abbas to halt security coordination with Israel, which is why Israel must exert intense efforts to assist him. 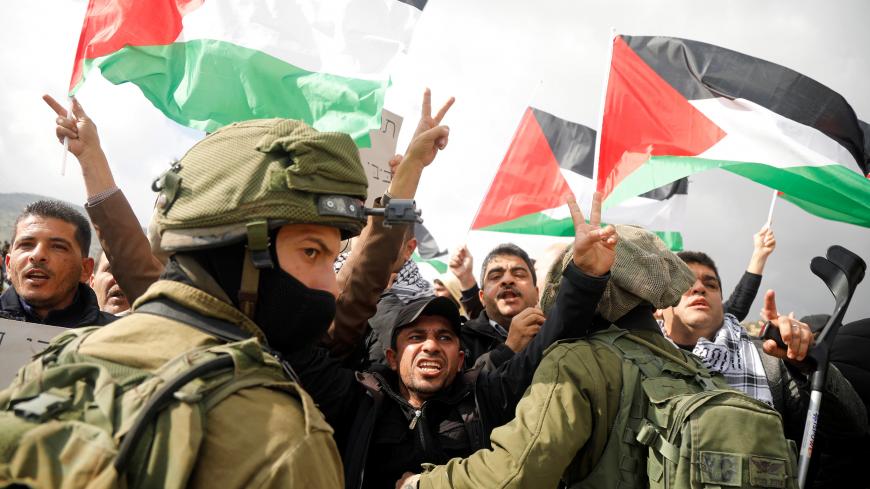 Despite the outrage among the Palestinian leadership over the Trump peace plan and Prime Minister Benjamin Netanyahu’s rush to annex parts of the West Bank, Palestinian President Mahmoud Abbas has thus far withstood the pressure on him from all directions and does not appear eager to cancel security coordination with Israel. The current assessment is that as long as there are no wide-scale or violent clashes between the Israel Defense Forces (IDF) and the Palestinians, and not many casualties resulting from impending demonstrations, he will continue to be able to withstand the pressure. For that to happen, however, Israel must exert intense efforts to assist him.

There is a great paradox when it comes to Israel’s attitude toward Abbas and the Palestinian Authority on all matters pertaining to security coordination and the official attitude toward the “refusenik from the Mukataa,” as Abbas some Israeli sources call him. One can also not overstate the sense of loathing for Abbas among the leaders of the Israeli right, starting with Netanyahu and including former Foreign Minister and Defense Minister Avigdor Liberman as well as Naftali Bennett, the current defense minister. Bennett's is an interesting story.

The Trump plan presents Bennett with a political dilemma in terms of his relationship to his electoral base. He cannot support the plan, because it includes the creation of a Palestinian state. This holds true even if the plan’s benefits to Israel — including the annexation of territory and the settlements — make it a sweet deal as far as he is concerned. On the other hand, as defense minister, he has to support the defense establishment in backing Abbas. In other words, he must assist the subject of his loathing so Abbas doesn’t succumb to his adversaries, who are pressuring him to take a bold step and cancel security coordination altogether.

An Israeli security source who spoke with Al-Monitor on the condition of anonymity said the defense establishment's “backing” of Abbas has many beneficial features. For example, it results in a significant reduction in points of friction between IDF soldiers and Palestinians at West Bank checkpoints; it has reduced to almost zero the number of IDF incursions into West Bank Area A (under Palestinian civil control, an area where the IDF usually enters to search for suspects on its wanted list); and it has resulted in instructions to IDF forces to show added caution in handling Palestinian demonstrations.

This backing is not limited to a reduction in IDF activities on the ground that would otherwise lead to an escalation of violence. According to another security source who also spoke on the condition of anonymity, IDF officers overseeing security coordination sent messages to their Palestinian counterparts to alleviate their fears, knowing that they would reach the seat of Palestinian government in the Mukataa. According to this same source, the officers reassured the Palestinians that Israel does not intend to implement the Trump plan “tomorrow morning.” In other words, thousands of new housing units in the settlements are unlikely to be approved tomorrow, and Netanyahu’s statements about annexation are, for the moment, for election purposes only.

Abbas has previously withstood enormous pressure to cancel security coordination. For instance, coordination continued even after the US Embassy was moved to Jerusalem in 2018 as well as during the 2015 wave of civilian violence and even during Operation Protective Edge against Gaza in 2014, when the number of Palestinian casualties exceeded 2,000 dead and 10,000 injured. In fact, collaboration actually intensified after the Israeli military offensive for fear of outbursts of rage in the West Bank that Abbas believed could also be directed at him. Despite the lack of trust between Abbas and Israeli politicians, chief among them Netanyahu, Abbas' relationships with Shin Bet Director Nadav Argaman and his predecessor, Yoram Cohen, was built on mutual trust. This has played an important role in the survival of security coordination despite all the obstacles along the way.

Nevertheless, Israel must not take for granted that Abbas' ability to stand firm on security coordination will last forever. Israeli declarations about impending annexation, the uprooting of the Palestinians' dream of a capital in East Jerusalem and the right of return for refugees present a new reality to the Palestinians and especially to a man, Abbas, who spent his political career advocating for nonviolence. The dream of Palestinian statehood is over, at least as the Palestinians envisioned their state. As far as they are concerned, they are now being offered “crumbs.” There is nothing on the diplomatic horizon. They have no hope, nothing to cling to. Given these circumstances, what can Abbas actually promise his people? Besides, there are many Palestinians who believe that it is time for him to resign from office and make room for someone else to lead.

If Netanyahu decides to “rebel” against the American position and approve immediate annexation, it is not unlikely that Abbas will succumb to pressure and in response declare the Oslo Accords null and void, announce that the PLO no longer recognizes Israel, and that security coordination is dead. Another element that should be added to the equation is that as the White House prepared to announce Trump's plan, the head of Hamas' political bureau, Ismail Haniyeh, called Abbas to try to stop the plan together. It has also been reported that Abbas invited Hamas' leadership for discussions on how to respond to the plan. This might be the closest the rival movements have been since Hamas' 2007 coup in Gaza.

Hamas would be happy to reconcile with the PA leadership, since doing so would extricate them from the economic and humanitarian crisis in Gaza. Haniyeh, however, has one sine qua non: Abbas must immediately suspend security cooperation with Israel. Abbas knows that this condition is nonnegotiable for Hamas. Without it first being met, there is nothing to talk about.

If demonstrations in the West Bank escalate and Abbas feels his position and government at risk, the pressure he faces will increase. He will then be forced to choose between Palestinian unity and security coordination with Israel. PA leaders are concerned that Hamas will take advantage of the situation to seize control of the West Bank. For the past 13 years with the West Bank and Gaza politically divided, Palestinian-Israeli security coordination helped to check budding attempts by Hamas to establish a firm foothold on the West Bank. If Abbas ends security coordination, he risks seeing Hamas' military wing in the West Bank grow stronger. Furthermore, we cannot forget that Bennett occupies the Defense Ministry, and with Israeli elections in the offing, he could force Abbas to make the kind of decision that he has so far managed to avoid.