Palestinian territories stable after Trump plan, but for how long?

Palestinians of the West Bank and Gaza remain united in their rejection of President Donald Trump's mideast plan but it is unclear in what way they will ultimately express it. 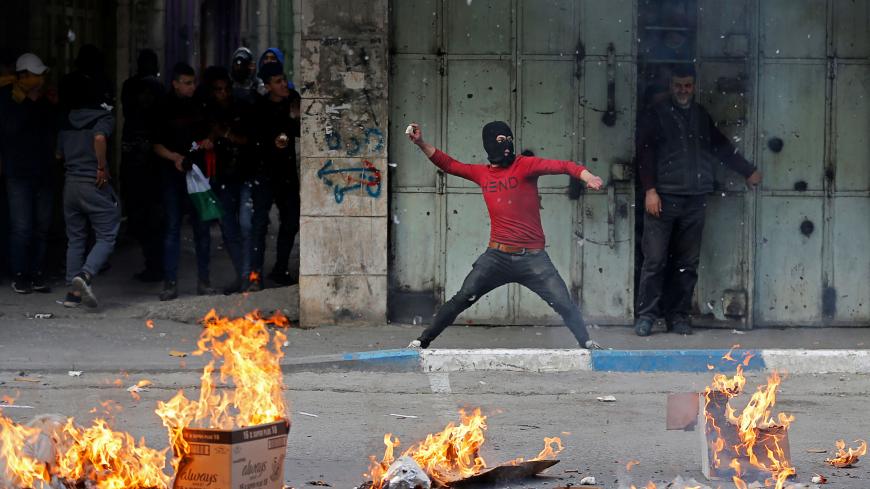 RAMALLAH, West Bank — A relative calm has returned to the West Bank after a brief outbreak of violence between Palestinians and Israeli soldiers on the outskirts of cities and contact points after US President Trump announced his so-called deal of the century for Israeli-Palestinian peace on Jan. 28.

Confrontations on the West Bank in early February went beyond Palestinians throwing stones and Molotov cocktails at Israeli forces to include deadly clashes involving gunfire, a car-ramming attack and resisting the demolition of a home. In Gaza, Palestinians launched more than 20 rockets and hundreds of incendiary balloons toward Israeli communities. In response, the Israeli army decided on Feb. 6 to send reinforcements to the border with Gaza and to the West Bank.

In a speech at the UN Security Council on Feb. 11, PA President Mahmoud Abbas said, “We will not resort to violence and terrorism, no matter the aggression against us. We believe in peace and fighting violence. We are ready to cooperate with any country to combat terrorism, and we will fight with peaceful popular resistance.”

Another reason for the relative stability is that the security services of the Palestinian Authority (PA) do not want an escalation with Israel. On Feb. 16, Abbas spokesman Nabil Abu Rudeina told Israel’s Channel 12, “I want the Israeli people to understand that we are fighting and putting an end to terrorism.” Abu Rudeina also told Israeli journalists that security relations between the PA and Israel are ongoing, but the calm won't last indefinitely.

Indeed, security cooperation could disintegrate for any number of reasons. One might be heightened tensions over responses to an increase in individual attacks, such as stabbings, car rammings and shootings of Israeli settlers and soldiers similar to the wave of attacks that began in October 2015.

Alternatively, the PA might halt security coordination with Israel depending on developments on the ground, for example, if Israel were to unilaterally act to annex West Bank lands. Such a move would also likely encourage individual Palestinians as well as factions to carry out attacks against settlers and soldiers. There is also the possibility of widespread popular resistance on the scale of the first and second intifadas.

In regard to Gaza, military escalation is an ongoing possibility. Israeli Prime Minister Benjamin Netanyahu has threatened operations against Hamas on several occasions if balloons and missiles continue to be launched toward Israel.

In light of the Palestinians' adamant rejection of Trump's plan heavily favorable to Israel, an escalation would appear to be closer to becoming a reality than the resurrection of a peaceful political process. An opinion poll conducted Feb. 5-8 by the Palestinian Center for Policy and Survey Research (PCPSR) revealed that more than 90% of the 1,270 Palestinians contacted in Gaza and the West Bank oppose the plan, and more than 80% believe it returns the conflict with Israel to an existential level.

“The majority speculates that the Trump plan has been deliberately designed to ensure a Palestinian rejection in order for the US to allow Israel to unilaterally annex the Jordan Valley and the Jewish settlements,” PCPSR wrote.

In terms of responses to Trump's proposal, 74% of respondents expect peaceful popular demonstrations, 66% believe the Palestinian leadership will encourage a diplomatic campaign against Israel through international organizations, and 61% said there will be armed actions. Also, 51% said the status quo will prevail.

Wassef Erekat, a former PLO artillery unit commander, told Al-Monitor, “If the deal of the century is implemented, things will be turned upside down, and the Palestinians will have no choice but an uprising. It may be an intifada or a massive revolution.” According to Erekat, Trump's deal would result in the dissolution of the PA and isolate Palestinians from one another, thus representing a threat to all Palestinians.

As for whether a popular nonviolent uprising or an armed rebellion might be more likely, Erekat said, “It could be a mix between the two or uncharted modern methods. For example, young people in Gaza use balloons, a method that had not been adopted by Palestinians before, and thus there might be new means of confrontation. The people have a lot of experience in confronting the occupation.”

Meanwhile, Ghassan al-Khatib, director of the Jerusalem Media and Communications Center and a former PA planning minister, told Al-Monitor that an armed uprising is possible and logical, given the deadlock over the peace process. He said the Palestinian public and political forces need to discuss alternatives.

As for Palestinian society supporting an uprising, Khatib said, “It is too early to tell, because long-term changes in popular trends are usually slow, and they are different from the hasty and short-term reactions. A change in trends by the street is very possible.”

Khatib further stated, “The Palestinian leadership is not concerned with altering the platform of political action, and it will not allow a trend toward violence even if there is a popular tendency in support of this.” That, however, won't necessarily prevent the public from creating new means for an uprising, he added.